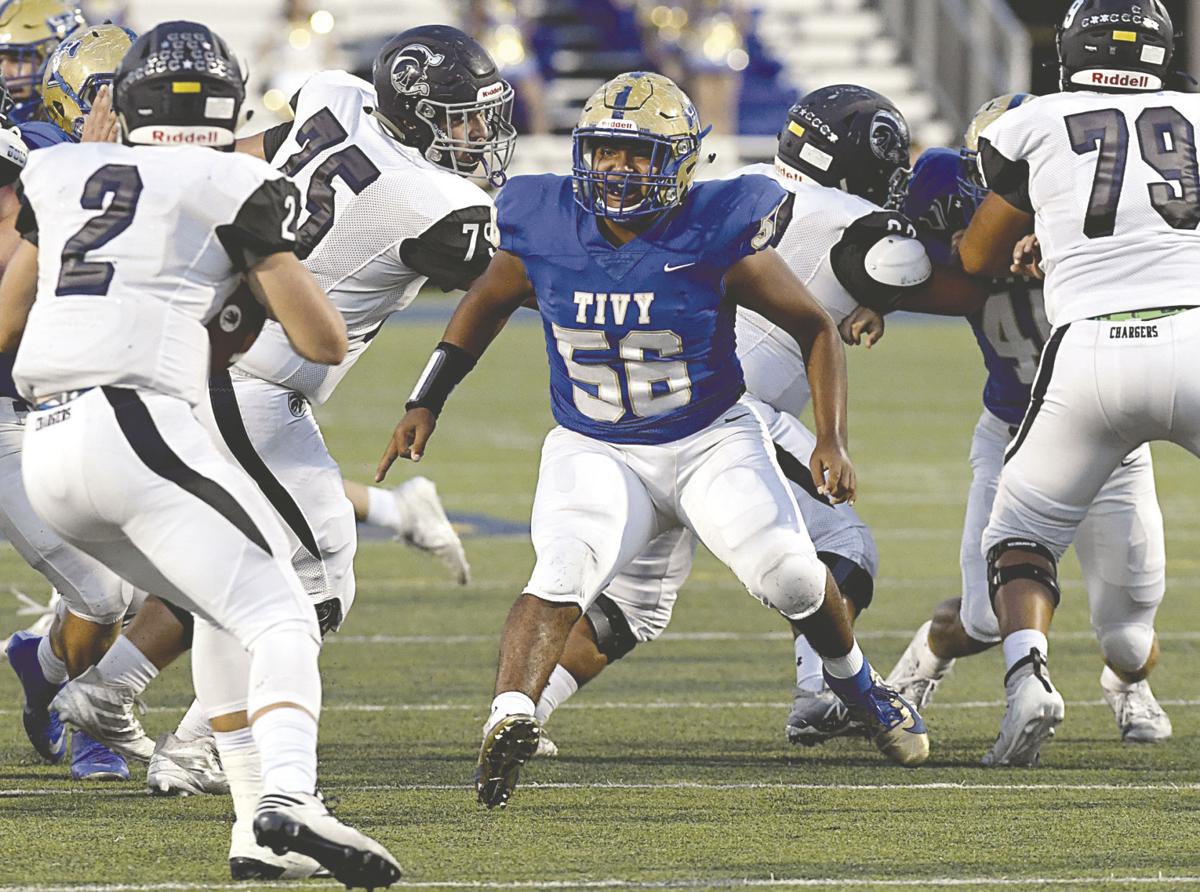 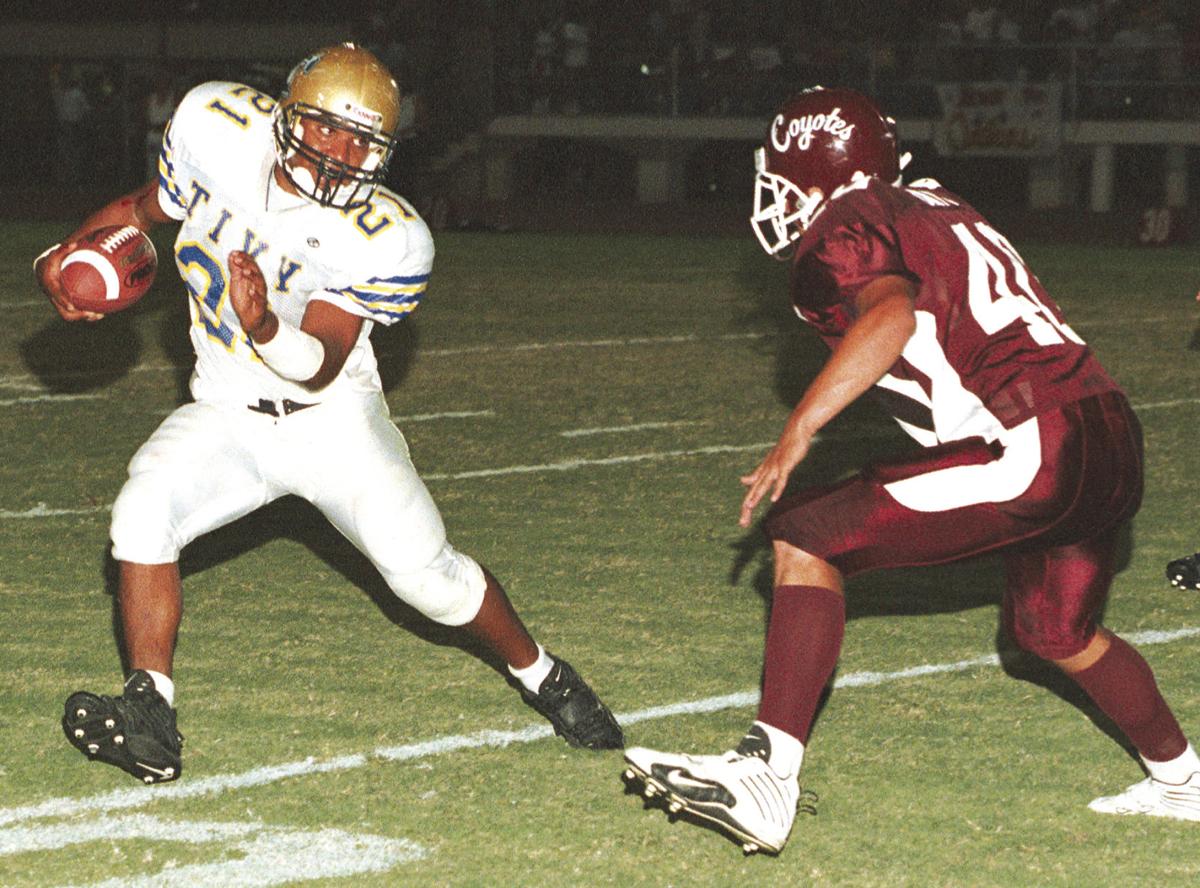 Once he’s finished stretching, Dominic Jefferson jogs toward his family, beginning his pregame ritual before Tivy’s kickoff against Boerne Champion.

The junior defensive lineman meets with his parents before every game, and the order is always the same. First, he embraces his stepfather, Aaron Rider, then his mom, Nicole Rider, and then his stepmother, Jennifer Jefferson.

And the last person he sees is always his father, Marty Jefferson. Marty tries to give his son an extra dose of inspiration before every kickoff. He does the same tonight.

“Do your job,” he tells Dominic before the biggest game of the season. “Work your butt off every play.”

Right now, Marty is getting goosebumps. It wasn’t too long ago when he was playing games here at Antler Stadium. He was the best running back to attend Tivy, compiling a record 4,472 rushing yards and 56 touchdowns in just three varsity seasons (1998-2000).

He doesn’t want to miss the precious time he spends with his son before every game.

“It’s so special,” Marty said. “I love that I get to see him during halftime and before the games. That gives him the spark that he knows we all are there. We all give him some love before the game and give him the pep talk to get him going.”

After they have finished embracing, Dominic joins his teammates in the huddle, while Marty helps the other football dads raise the blue “Tivy Fight Never Dies” banner.

Once again, father and son briefly make eye contact; Marty gives Dominic one last pep talk before the Antlers charge through the banner.

For the next 48 minutes, Dominic does just that.

“One rep is the state championship!”

He knows it’s tempting to slack every now and then during the course of a long season, but he also emphasizes this is unacceptable. One extra rep in practice, in the weight room or during sprints, can be the difference between a deep playoff run or a first-round exit. That’s why Dominic hasn’t taken a day off in the last 10 months. He expects his fellow defensive linemen to do the same.

“He always has a great attitude every day,” Tivy defensive coordinator Jeremy Hickman said. “He works hard. … The kid plays with a lot of determination and heart.”

During his sophomore year, Tivy’s coaches moved Dominic from running back to the defensive line. Initially, he wasn’t too enamored with the position switch, disappointed he wasn’t going to play the same position as his dad. Marty, though, encouraged him to embrace the change.

“You are going to be (on the defensive line) no matter what,” Marty told him. “So the best thing you can do is get better at what you can do.”

Dominic has done exactly that during his two years on varsity. Through five games, Dominic has collected 36 tackles, four tackles for loss and two sacks. But his stats don’t capture his impact on Tivy’s defense. In run defense, his primary responsibility is to plug gaps, allowing one of Tivy’s linebackers to storm through the to make the tackle. In pass defense, Dominic pressures the opposing quarterback. If he can’t sack him, he’s going to try to force him into a bad throw.

He’s happy whenever he discovers middle linebacker Cole Mixon had another 20-plus tackle game — the stat line shows he did his job that game.

He’s also a diligent student of the game. He watches film during lunch, in the library and as soon as he gets home after games. He studies some of the best defensive linemen in the NFL, trying to emulate their moves. He calls his dad every day during the week to talk about the opposing offensive line’s tendencies and how he’s going to beat them.

“Every time I am with him, he’s watching film,” fellow defensive lineman Hayden Barnett said.

He wants to make his father proud. Marty was another player who refused to take a play off during practice, according to former Tivy coach Mark Smith.

Dominic, then, is doing his part to continue the family tradition.

“He’s been a big role model for me,” Dominic said. “I have been waiting to show him how hard I work.”

When Dominic was a child, adults often addressed him as, “Little Marty.” In truth, he never really cared for this salutation.

Still, he never corrected the adults. He had to gain their respect first.

He believes he’s earned that respect during his last two years at Tivy. He definitely earned it that night against Champion. Against the Chargers, he wasn’t little Marty, but one of the best defensive linemen in the district.

With the Chargers threatening to take the lead late in the fourth quarter, Champion quarterback Luke Boyers dropped back in the pocket, hoping to throw a deep pass for the game-winning touchdown.

There was just one problem: Dominic overpowered the right guard and charged after the quarterback. Boyers spun to avoid Dominic, but fell into the waiting arms of defensive end Hayden Poe for a 13-yard loss. The sack helped the Antlers seal a 24-19 win over their rival, placing them on the path to win another district title.

Poe made sure to thank Dominic during his postgame interview with Mark Keller. But Dominic didn’t need the credit. He had done his job that night, and now he had an opportunity to celebrate another win with his dad.

He may no longer be little Marty, but that didn’t stop big Marty from picking him off his feet for a giant bear hug.

“You stepped up big time,” Marty told his son. “I am so proud of you.”

Marty will be at Antler Stadium tonight during homecoming against Uvalde (3-2), hoping to share another celebration with his son.

“I tell him every time I get talk to him how proud I am of him,” Marty said. “He knows I am proud of him. … I keep getting goosebumps talking about it.”