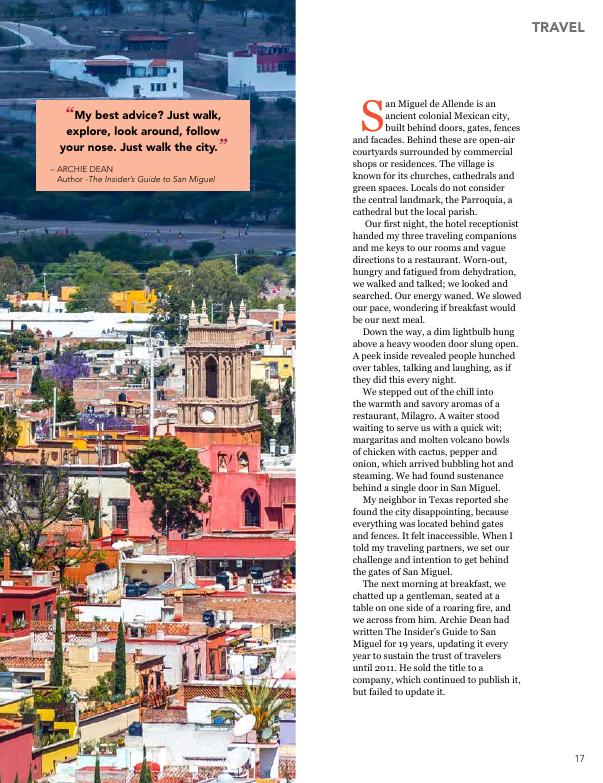 Span>
Behind the Gates of San Miguel
By Rhonda Wiley-Jones
05.18.19

San Miguel de Allende is an ancient colonial Mexican city, built behind doors, gates, fences and facades. Behind these are open-air courtyards surrounded by commercial shops or residences. The village is known for its churches, cathedrals and green spaces. Locals do not consider the central landmark, the Parroquia, a cathedral but the local parish.

Our first night, the hotel receptionist handed my three traveling companions and me keys to our rooms and vague directions to a restaurant. Worn-out, hungry and fatigued from dehydration, we walked and talked; we looked and searched. Our energy waned. We slowed our pace, wondering if breakfast would be our next meal.

Down the way, a dim lightbulb hung above a heavy wooden door slung open. A peek inside revealed people hunched over tables, talking and laughing, as if they did this every night.

We stepped out of the chill into the warmth and savory aromas of a restaurant, Milagro. A waiter stood waiting to serve us with a quick wit; margaritas and molten volcano bowls of chicken with cactus, pepper and onion, which arrived bubbling hot and steaming. We had found sustenance behind a single door in San Miguel.

My neighbor in Texas reported she found the city disappointing, because everything was located behind gates and fences. It felt inaccessible. When I told my traveling partners, we set our challenge and intention to get behind the gates of San Miguel.

The next morning at breakfast, we chatted up a gentleman, seated at a table on one side of a roaring fire, and we across from him. Archie Dean had written The Insider's Guide to San Miguel for 19 years, updating it every year to sustain the trust of travelers until 2011. He sold the title to a company, which continued to publish it, but failed to update it.

We asked for Archie's recommendations. "My best advice? Just walk, explore, look around, follow your nose. Just walk the city."

So we hiked out onto cobblestones streets. Cars couldn't pass, if we walked two abreast; so we took to more narrow sidewalks single-file. That proved dangerous with pipes, cracked concrete, steps to stores or houses and other hazards. Foot and vehicular traffic created a horizontal Cirque du Soleil ballet.

We chose to take the trolley tour first for an orientation to the city. Tourist office staff told us to go to a specific intersection and find "the man with a white cap" who sold tickets for the excursion. We found him — in the center of the intersection.

We viewed the city from many directions, but one stop captured my imagination. A specially designed square at one time in history had served as the village laundry with free spring water. Separate washbasins were built of concrete and stood empty now, crumbling and unused. Because the spring still ran freely, residents continued to received free water in their homes.

Curious explorers, we stepped across worn thresholds of cathedrals, wandered behind gates, moseyed around courtyards, checked out menus for future reference, ambled through small galleries of art both exquisite and primitive and discovered the public library.

The library is a tribute to the city. We heard people practicing their English or Spanish with a partner in the open courtyard. It ran its own thrift store, where we shopped for souvenirs.

The following day we taxied to a market, like a county fair back home. Vegetable growers brought in the morning harvest, merchants sold homemade goods, food vendors cooked on site. One seller built a 90-degree wall of strawberries on two sides of his table eighteen inches high. Some stalls held new, top-labeled clothes, while others accommodated stacks of outgrown or unneeded clothes, as well as Mexican woven blankets, pottery, and leather goods.

Unlike at home, police officers stood at attention in uniform with AK-47s slung across their chests, hands loosely sitting on the grip with ski masks on and eyes roaming. One of them looked away, so I quickly pointed my camera. Before I could click, he caught me. I mouthed, "May I?" He shook his head slowly, wagged a finger "no-no" from the hand siting on the rifle. I quietly put it back in my purse, feeling criminal for trying.

We visited some American acquaintances, staying in a local residence, who introduced us to a bóveda ceiling, a construction term for any arched brickwork.

From each corner of the one room in the house the brickwork domed and fit together as an arched ceiling, as if carved instead of bricked. It must have required special skill, because it was the only bóveda ceiling in the house.

Though my friend in Texas experienced the city as inaccessible, we did not. The four of us discovered magic behind the gates of San Miguel.

We tried on genuine "San Miguel" shoes, made for the cobblestoned streets of SMA. Viewed famous and not so famous art. Carried home memories of mosaics, museums, masterpieces and the mystery of what we left unseen. But we found our way behind the gates of San Miguel.

TO SEE & DO IN SAN MIQUEL 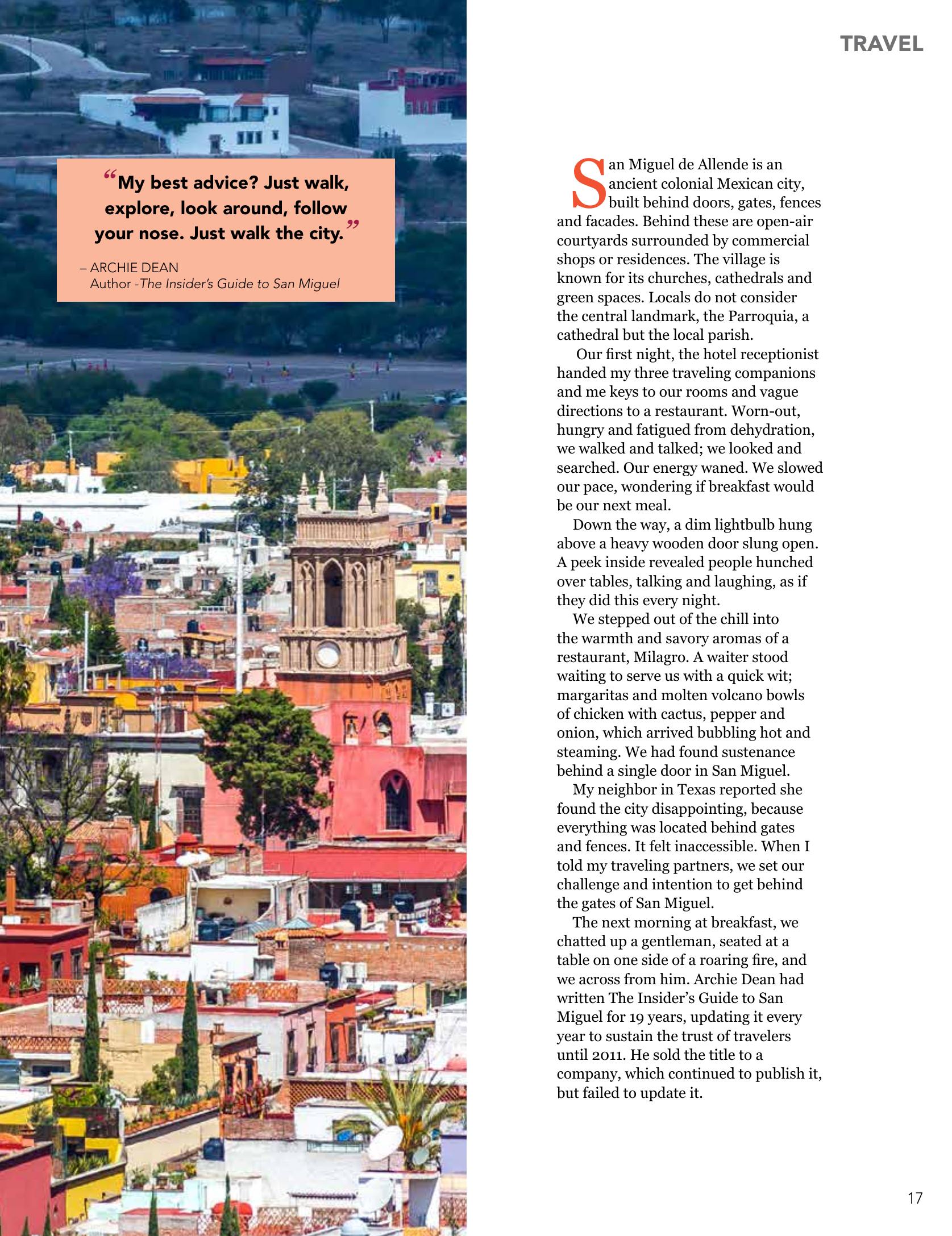