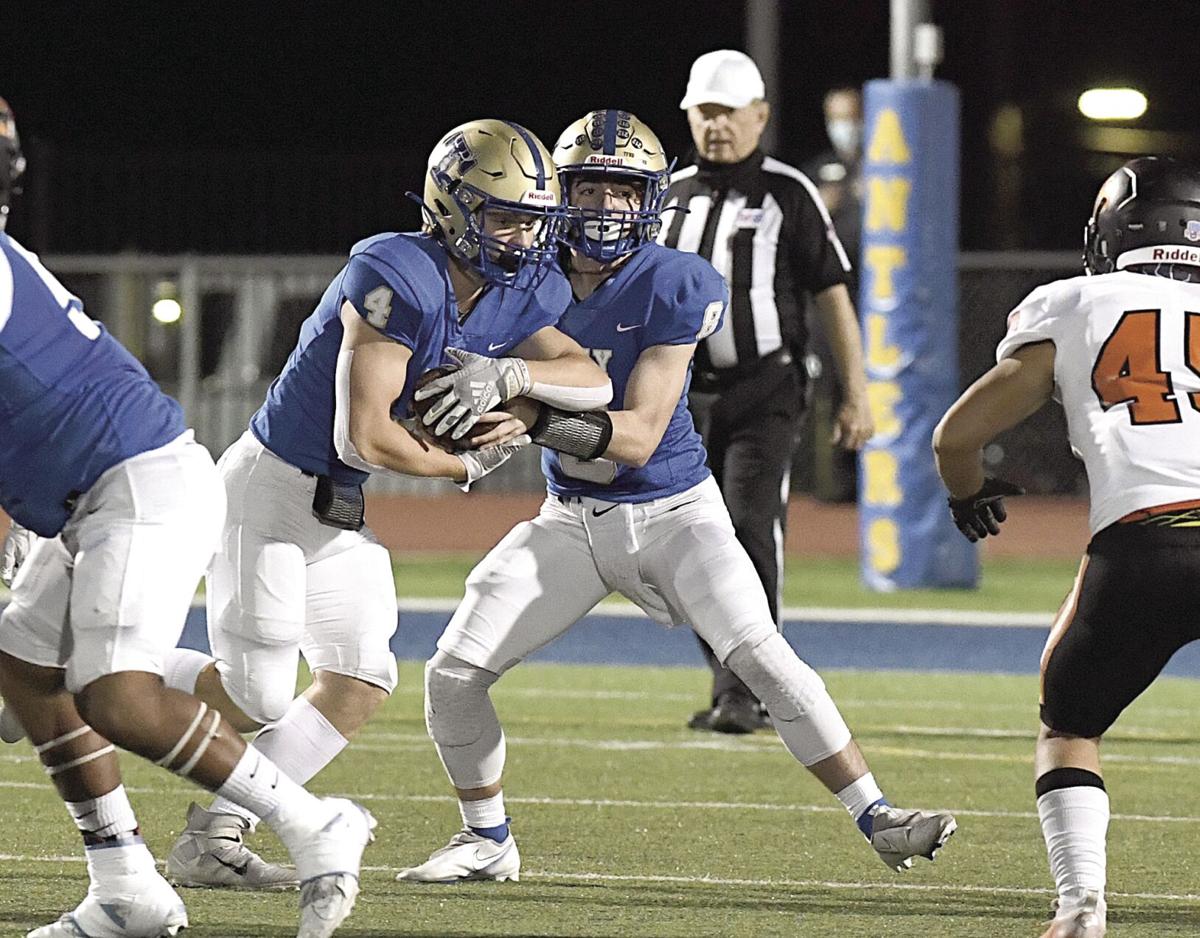 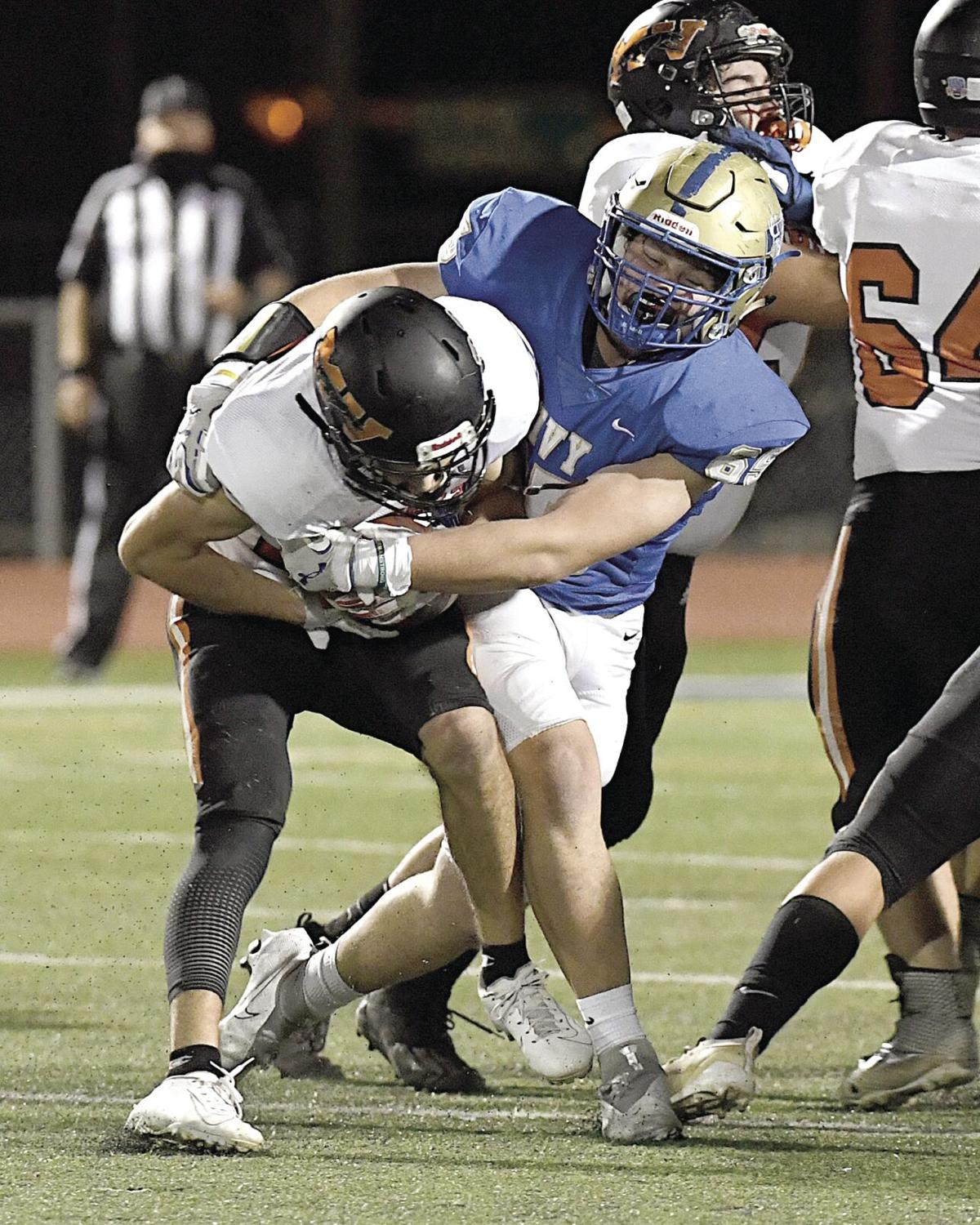 Hayden Barnett, 65, for the Antlers, stops the Medina Valley runner for a loss of 2 yards on the play. 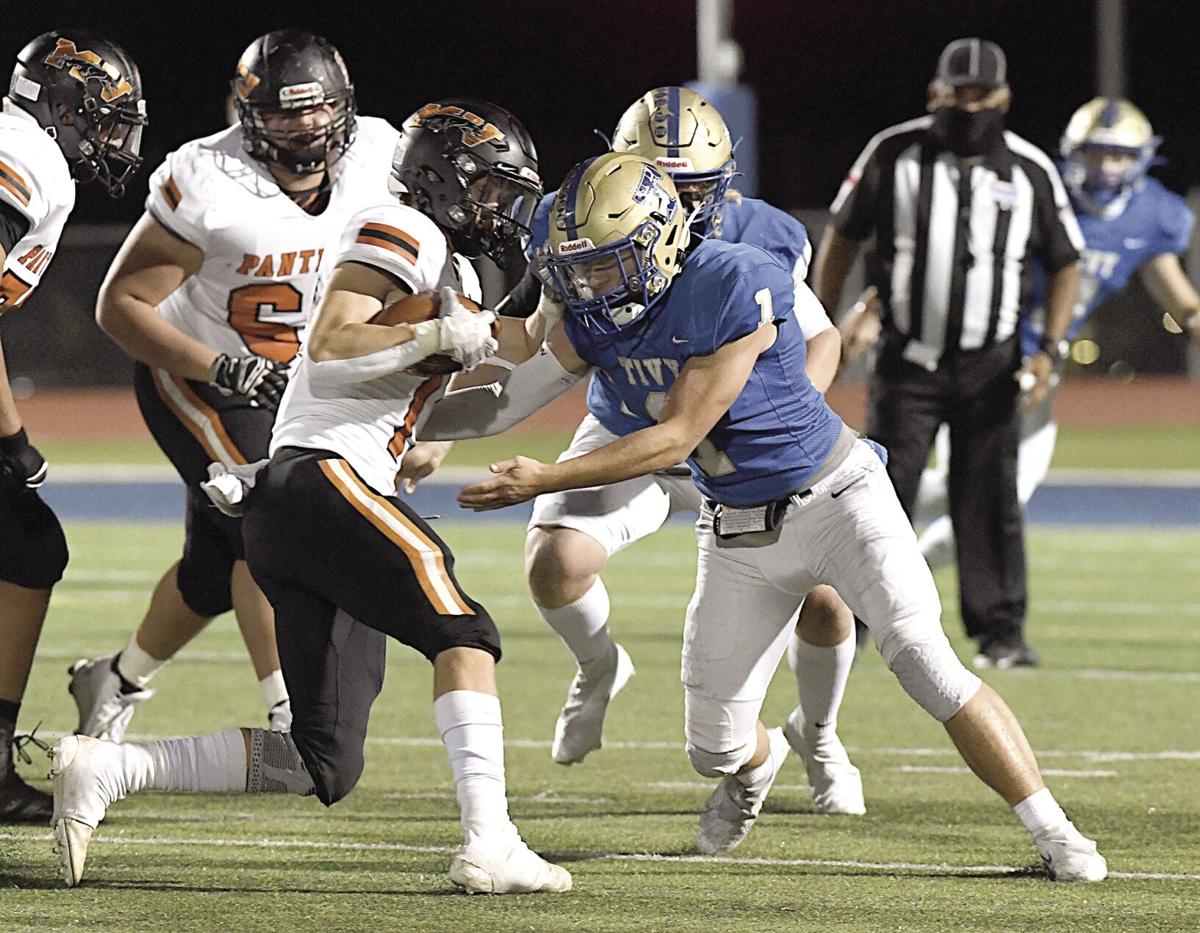 Antlers Payton Rice, 1, makes the initial contact on the Medina Valley running back. 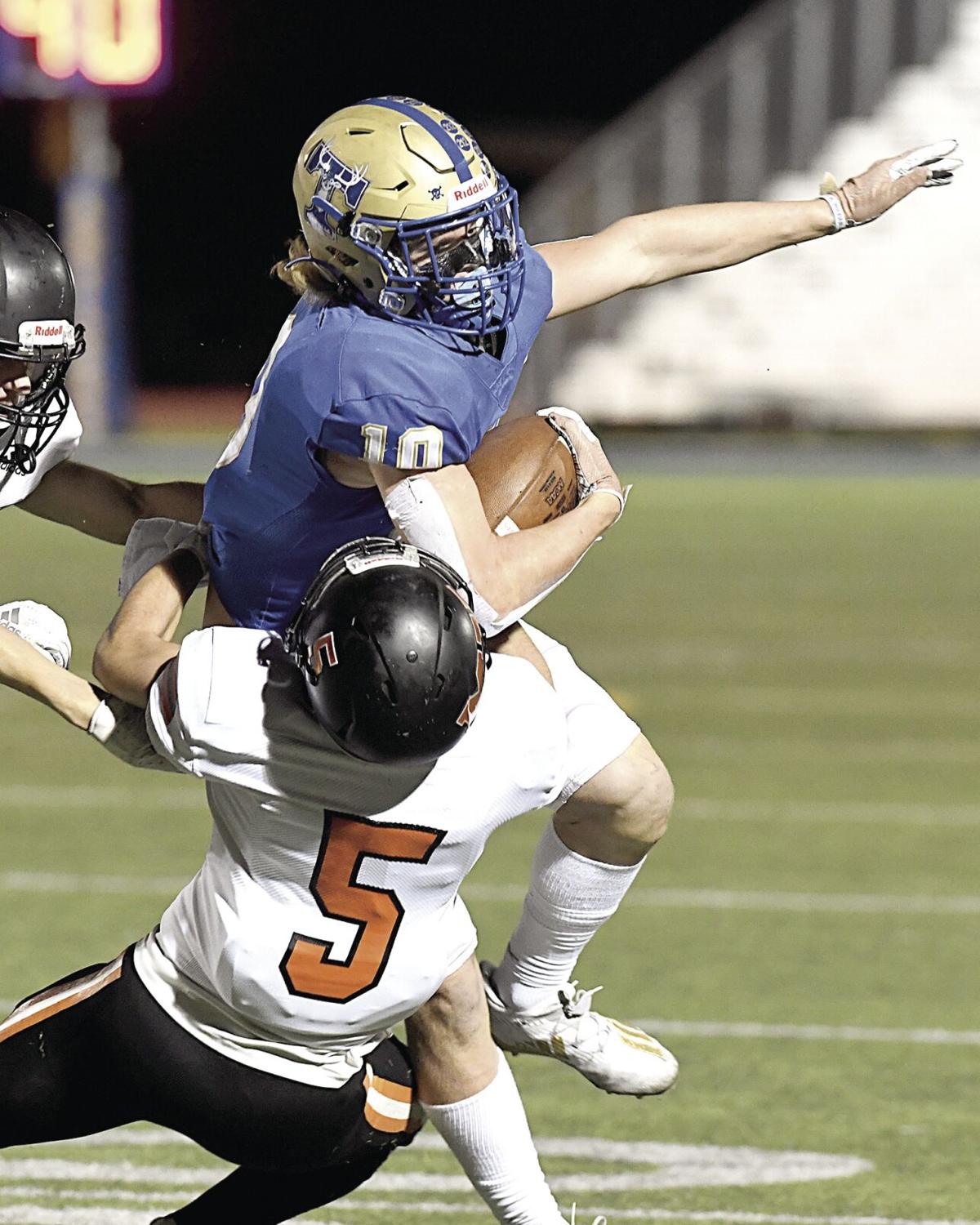 Fisher Middleton, 10, fights for yards as he runs over a Medina Valley defender. 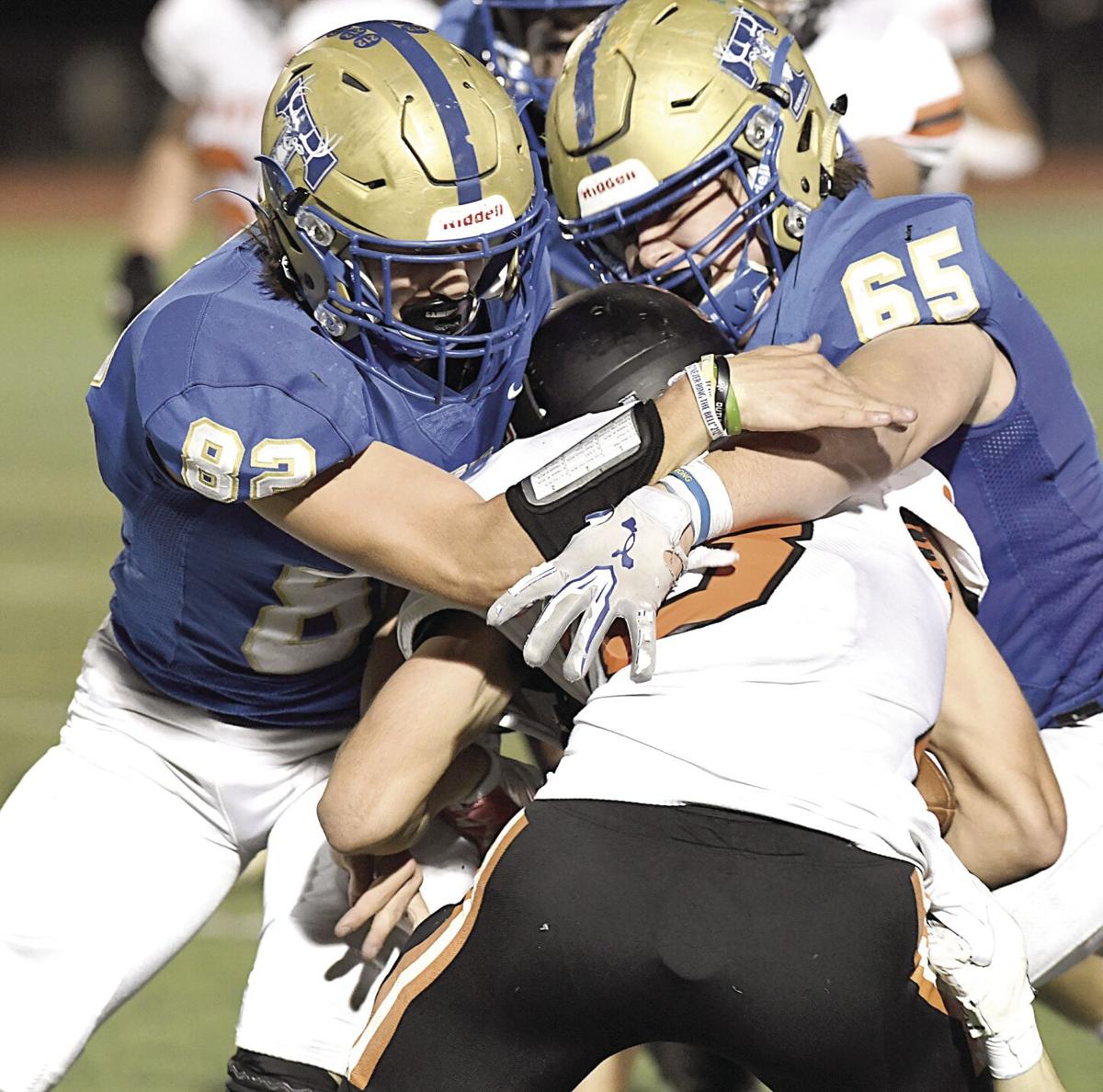 Tivy’s Kyler Davis, 82, and Hayden Barnett, 65, stop the running back for Medina Valley for no gain.

Hayden Barnett, 65, for the Antlers, stops the Medina Valley runner for a loss of 2 yards on the play.

Antlers Payton Rice, 1, makes the initial contact on the Medina Valley running back.

Fisher Middleton, 10, fights for yards as he runs over a Medina Valley defender.

Tivy’s Kyler Davis, 82, and Hayden Barnett, 65, stop the running back for Medina Valley for no gain.

Adversity has come in many forms this season for the Tivy Antler football team.

The weight of a challenging football season came down on the Antlers Friday night as they fell to the Medina Valley Panthers 28-14 at Antler Stadium.

It was Senior Night and there were high expectations for the Antlers to make a run for the playoffs, but questions remain on whether the Antlers will make the postseason for a 24th consecutive season or not after a gut-wrenching loss at home.

Turnovers and penalties have been a recurring theme throughout the season for Tivy.

Costly mistakes hurt the Antlers once again, especially in the first quarter.

On Tivy’s first drive of the night, Jake Layton fumbled the ball, but luckily fell on top of it, but the drive stalled forcing the Antlers to punt it away.

One of the misfortunes of the night occurred when Medina Valley quarterback Nick Rash tossed a 10-yard pass to Troy Tomaselli.

Tomaselli rolled into a referee forcing an injury timeout for the official.

Thankfully, he was not seriously injured.

This forced Medina Valley to punt it away and what appeared to be a terrific defensive stand turned into a nightmare.

On the punt, the return was fumbled at the one-yard line and Medina Valley pounced on the pigskin setting them up with first and goal at the one yard line.

Tivy’s second turnover turned into points for the Panthers.

Rash rushed in for the easy score to put Medina Valley on top 7-0 in the first quarter of play.

On the next offensive possession for the Antlers, Layton tossed a beautiful 34-yard pass to Jackson Johnston who made a one-handed catch in the process.

A penalty on the next play backed the Antlers up 10 yards and then Tivy’s third fumble of the first quarter was luckily retrieved by Layton who recovered his own drop.

Two plays later, Layton was sacked by Jared Marty for an 8-yard loss and the drive came to a halt.

CLEANER GAME IN THE SECOND

Tivy seemed to pick up some momentum in the second quarter, but not before Rash connected with Jessie Salinas for a 34-yard pass which set the Panthers up with first and ten at the Tivy 21.

On the next play, Bobby Peterson took it up the gut for a 21-yard touchdown run and Medina Valley was on top 14-0 early in the second period.

On Tivy’s next offensive drive, Jacob Roy went down with an injury and he did not return to the game.

Tivy ran the ball on every play of this possession, but they did strike paydirt on a 5-yard option run pitch from Layton to Ryan Maberry for the Antler’s first touchdown of the night cutting the lead to 14-7 in the second quarter.

Tivy’s defense made big plays including a tackle for loss by Scherer and a 8-yard sack by Hayden Poe giving the Antlers a chance to do something on offense before the break.

Jake Layton was picked off by Michael Tomaselli shortly before the half and the score remained 14-7 Medina Valley at intermission.

After the break, Layton was picked off again by Michael Tomaselli, his second pick of the night.

Ok, so it’s not sheer power, but Scherer Power will do.

Scherer knocked Rash for a loss of nine yards on a ferocious sack.

Scherer came to play and his presence was felt on the roster all night long.

After the sack, Tivy got the ball back and marched down the field for an impressive 53-yard drive featuring Fisher Middleton and Jake Layton running the ball.

Layton also connected with Fisher for a 21-yard pass on the drive.

This gave Tivy first and goal at the three yard line.

Layton then tossed a shuttle pass to Jack Frazier who scored a touchdown and we had ourselves a ballgame at 14-14 apiece.

Rash decided to pass the ball and struck Rafe Clendenin for a 40-yard touchdown pass to give the Panthers a 20-14 lead.

A bright spot came when the extra point was blocked and the Tivy bench cheered each other on.

After the score, Layne Zales took the kickoff return from the eight yard line and returned it to the Antler 27.

A Medina Valley player was involved in a collision during the tackle and was carried off the field on a stretcher.

We learned that it was just a stinger thank goodness, but the stands were quiet for several minutes.

Tivy put together some nice runs, but fell short on a fourth and three at their own 44-yard line when Jack Frazier was just shy of the first yard marker giving the ball back to Medina Valley.

Tivy’s defense did their job and with nearly two minutes left on the clock, they forced Medina Valley to fourth down and four from the Tivy 40-yard line.

That’s when Rash decided to take the snap on a fake punt and he took it to the house for a 40-yard touchdown run.

To add insult to injury, Tyler Mangum ran for the two-point conversion and effectively put Tivy away 28-14.

Anger and frustration set in on the Tivy bench among some of the players and Coach Jones had to settle some of the kids down to keep their emotions in check.

Tivy fought hard on the field, but found themselves on the short end of the stick this week.

Tivy is scheduled to face Alamo Heights next Friday at 7 p.m. in San Antonio.

This is a schedule change from the originally scheduled time of 2 p.m. on Saturday.

Who should take the COVID-19 vaccine?

Later this month, the FDA will consider approval of two vaccines made by Pfizer and Moderna. Current estimates project that no more than 20 million doses of each vaccine will be available by the end of 2020. Each product requires two doses. Who should take this vaccine?