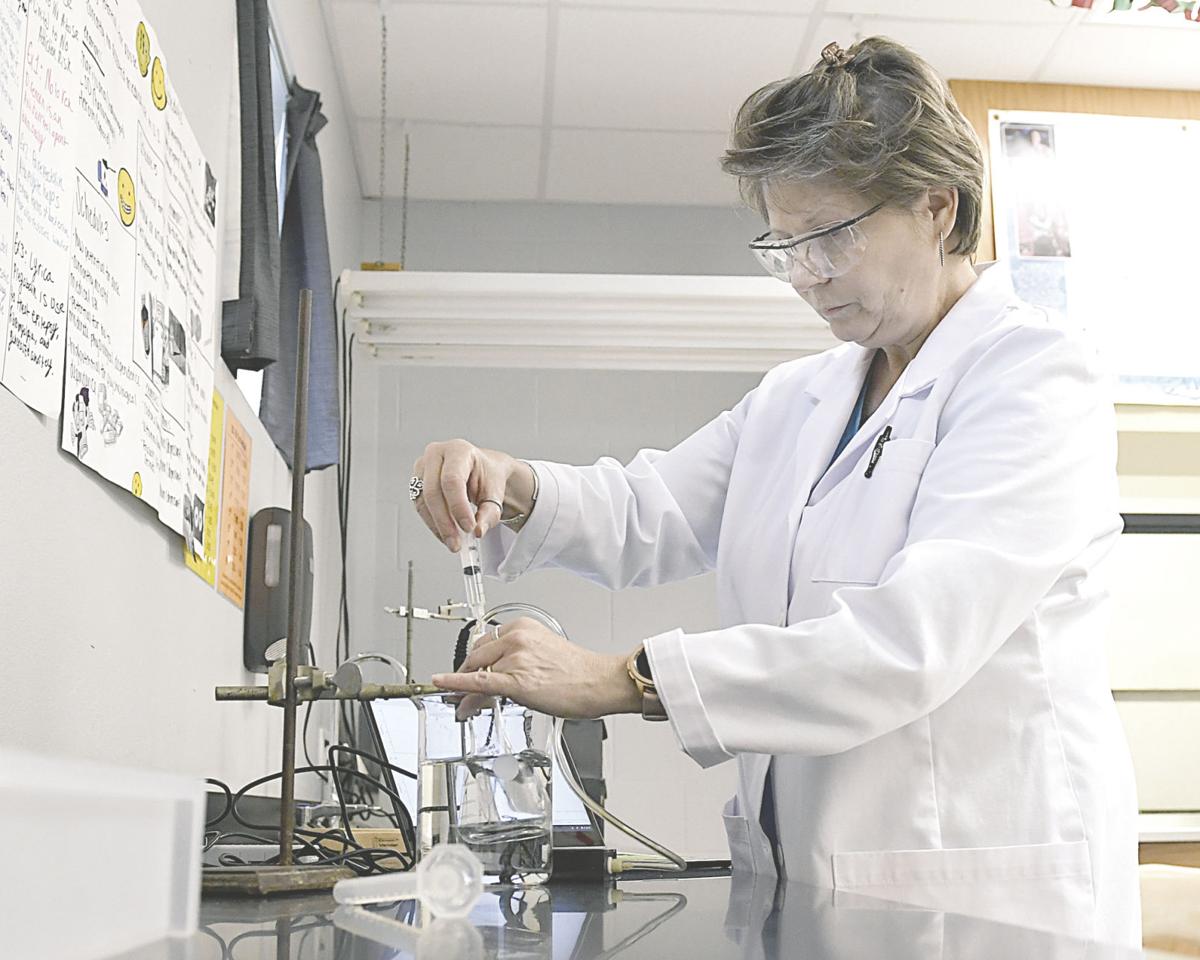 Libby Knaggs is mixing Chloric Acid and magnesium to gather pressure og the gases produced by the mixture. Knaggs has been teaching science for 27 years and is currently teaching at Tom Moore High School. 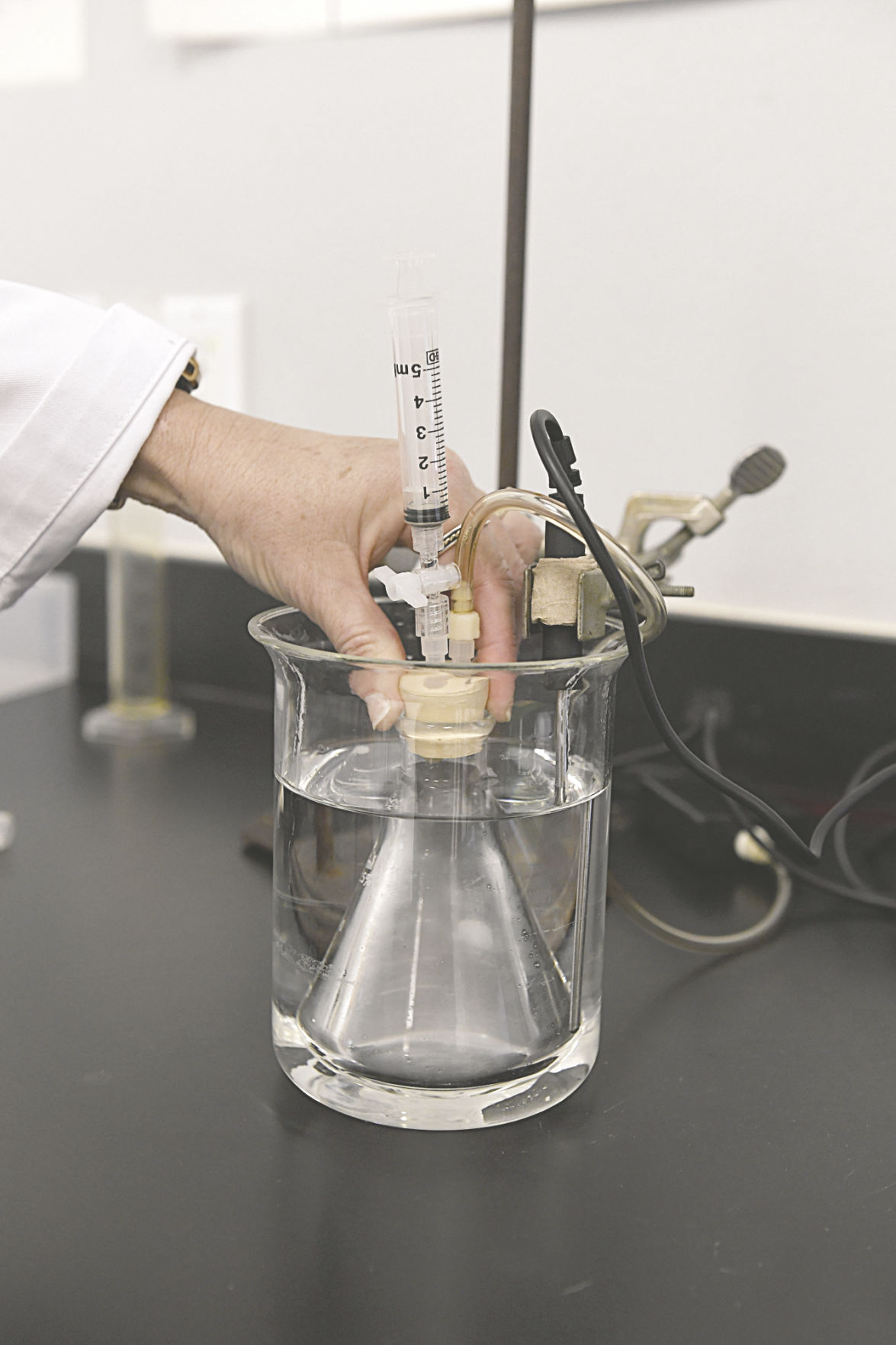 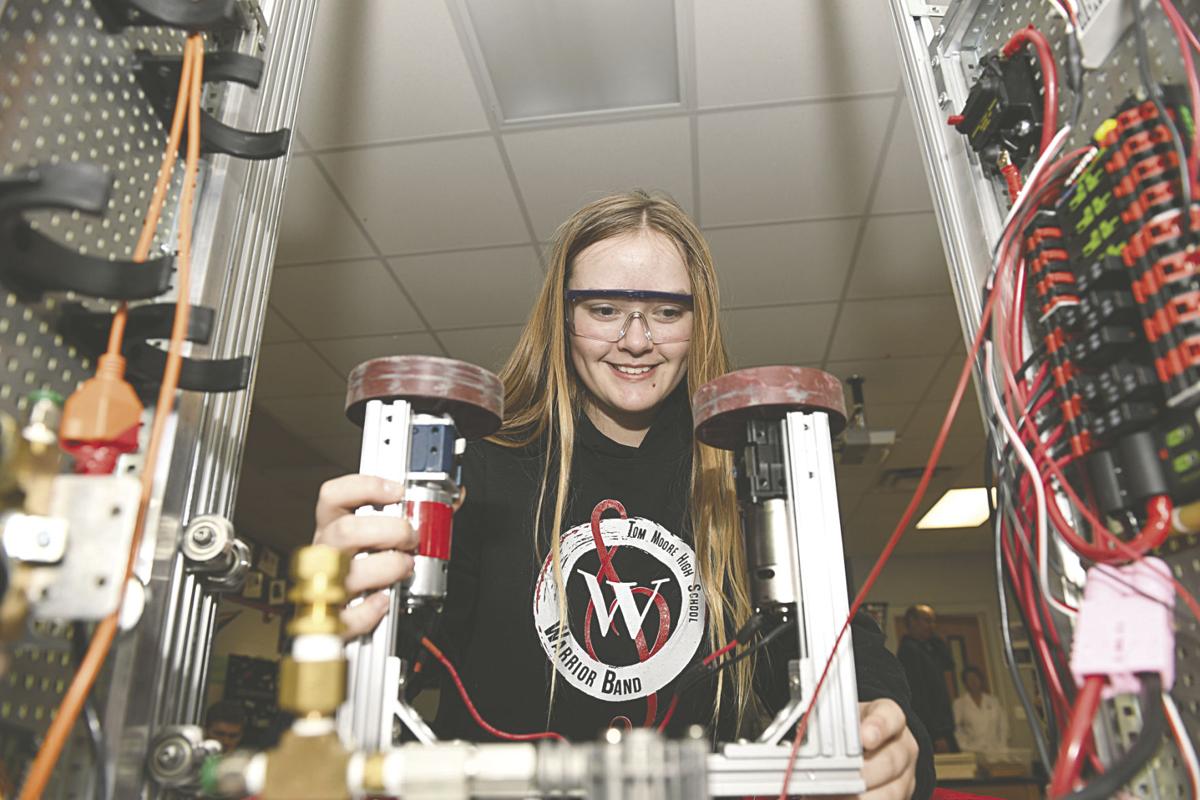 Jordan Bunch has a love of science and is a member of the Tom Moore High school robotics team.

Libby Knaggs is mixing Chloric Acid and magnesium to gather pressure og the gases produced by the mixture. Knaggs has been teaching science for 27 years and is currently teaching at Tom Moore High School.

Jordan Bunch has a love of science and is a member of the Tom Moore High school robotics team.

Since the 1980s, statistics have shown that women are getting more college degrees than men with one very big exception — science.

Outside of the fields of biology, women are still behind men when it comes to degree attainment in the fields of science, technology, engineering and math. Globally, about 30% of the world’s researchers are women, but that’s starting to turn.

Here in the Hill Country, there are plenty of options for women and girls to participate in science, and there’s a feeling of optimism when it comes to the future.

“I enjoy building and finding the solutions to a problem,” said Ingram Tom Moore High School student Jordan Bunch, who has been accepted into an Aerospace Scholars program through NASA.

At Schreiner University, women are making a difference in STEM programs

“I am seeing a change —  at least at Schreiner University,” wrote Adrian Zapata, an assistant professor of chemistry at Schreiner. “More and more women STEM majors are graduating. For example, in chemistry alone, anywhere between 60-80% of our graduates are women. In chemistry, we are also noticing that the majority of our chemistry majors are going on to post-baccalaureate programs like graduate school and professional school. We also noticed that a good percentage of our undergraduate female students are accepted to offsite competitive internships at a higher rate than what we have previously seen at Schreiner, at least in the last five years.”

That’s certainly a good sign and is running counter to where we were as a nation just five years ago, according to the U.S. Department of Commerce study.

While nearly as many women hold undergraduate degrees as men overall, they make up only about 30% of all STEM degree holders. Women make up a disproportionately low share of degree holders in all STEM fields, particularly engineering.

Women with STEM degrees are less likely than their male counterparts to work in a STEM occupation; they are more likely to work in education or health care.

Zapata, who is enthusiastic about the future, also adds this important element of context.

“Even though I notice some good progress, it is important to continue adding diversity as much as possible to science careers, research and teaching,” she wrote in an email. “Even though I see an increase, there is still a lot of work to be done to diversify science in this way.”

We heartily agree. There is work that needs to be done, but we can get there.

Good job on the part of Kerrville Independent School District Superintendent Mark Foust to send out a letter to parents urging them to be vigilant when it comes to the coronavirus.

While the risk is low, Foust’s idea was to tell the parents that the school district was well aware of the situation and was staying informed of the respiratory illness that has claimed the lives of more than 1,000 people in China.

It’s a good move by the school district, and one that we appreciate.

MISS: Fredericksburg is the new Aspen

We really love Texas Monthly magazine, and we all make mistakes but …

We promptly spit out our glass of Chardonnay when we read that “Fredericksburg is the new Aspen” in this month’s edition of the magazine.

Uh, Fredericksburg is cool, but let’s not kid ourselves. It is not Aspen.

Aspen is Aspen — it has snow and the XGames. It has rich people on an international scale.

In all seriousness, the story is an interesting tale about the amount of money moving into the Hill Country, and how it is changing the region. We are clearly seeing that here in Kerrville, where growth is going to be the No. 1 topic of conversation.

However, it’s a tad premature to call Fredericksburg anything other than it is — a small emergent town with a lot of potential.

Another Texas Monthly mention of Kerrville features local restaurant Rails Cafe, which received two stars. What’s odd is that it was a pretty nice review for the Schreiner Street eatery.

“A chicken and rice soup was delish and just what the doctor ordered,” the anonymous reviewer wrote before giving the restaurant two stars — which is still considered good.

If the doctor ordered it, and you deliciously enjoyed it, doesn’t that mean more than two stars? C’mon, Texas Monthly.