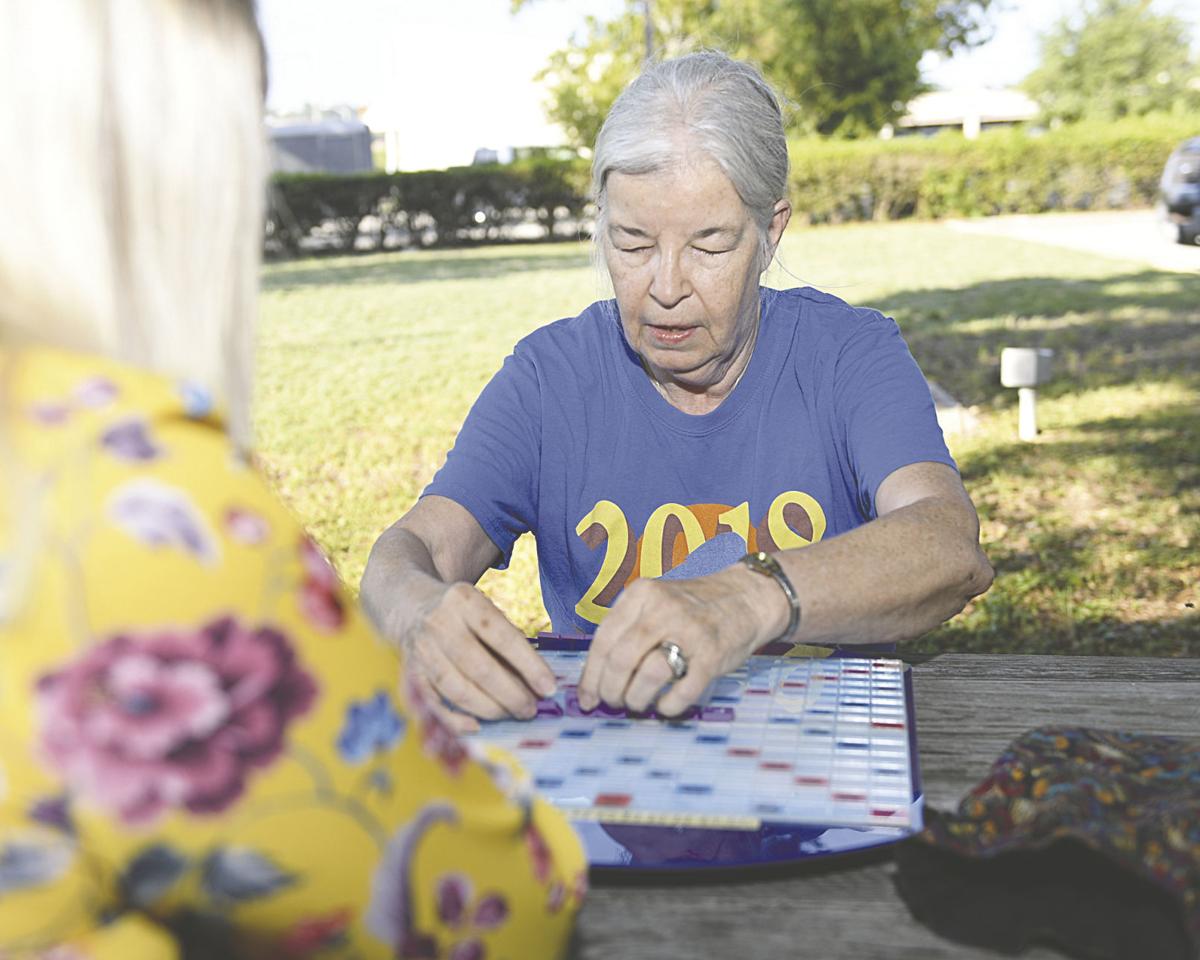 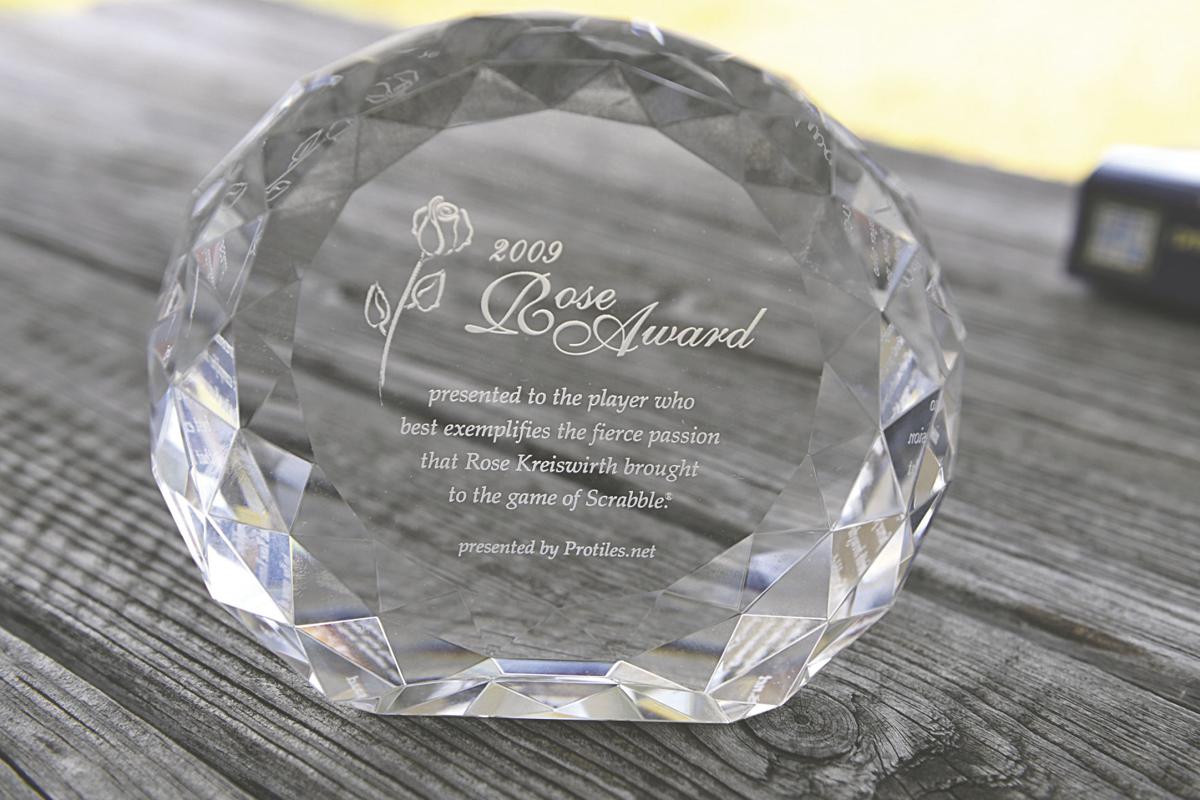 In 2009, Kerrville resident Deborah Gaudier was awarded the first ever Rose Award at the North American Scrabble Championship — an award given each year to a female player who best exemplifies fierce competitiveness and compassion.

In 2009, Kerrville resident Deborah Gaudier was awarded the first ever Rose Award at the North American Scrabble Championship — an award given each year to a female player who best exemplifies fierce competitiveness and compassion.

For competitive Scrabble player Deborah Gaudier — a full-time Kerrville resident since 2010 who just returned from back-to-back international Scrabble tournaments — the thrill of the game lies in the challenge.

“I enjoy the challenge of the words and the challenges of the play of the game. There’s an intellectual challenge to it. It keeps my mind sharp,” she said.

While Gaudier has always enjoyed the game, she first joined a Scrabble club in the fall of 2003.

It was a newspaper story about a Scrabble club member attending a world competition, said Gaudier, that first sparked her interest in joining a club.

“I read about it and said, ‘There’s a Scrabble club! I could play Scrabble with people who actually want to!’ (And) I looked it up and they met 10 minutes from my house. So I started going,” she said.

About a year later, in the winter of 2004, Gaudier began playing competitively in tournaments.

In competitive Scrabble play, a clock is used, and each side gets 25 minutes, which can be dispersed between moves however the player chooses.

Throughout her 14-year competitive Scrabble career, Gaudier has had seven first-place finishes at competitions.

Gaudier was the first ever recipient of this award.

The North American Scrabble Championship consisted of 31 games and the Niagara Falls International Open consisted of 21.

At the North American Scrabble Championship, in its 29th year, 401 Scrabble players gathered from five continents, 12 countries and 49 American states and Canadian provinces competing for $55,000 in prizes.

To attend nationals, a player must have a rating, Gaudier said, and in order to obtain a rating, a player must compete at a tournament besides nationals — such as the State of Texas Scrabble Championship in Schertz, held this year from Nov. 9-11.

At nationals this month, Gaudier won a class prize in her division — third place in division four — and a cash prize. The second place winner in her division was the youngest player in the competition, a 12-year-old player from the Houston area.

Gaudier said her two favorite words she played at the North American Scrabble Championship this year were “cloze,” for which she received 87 points, and “gaudier” — her last name — which is a playable Scrabble word, she noted.

It was only worth 67 points, said Gaudier, but it was a “bingo,” a term for when a competitor plays all seven tiles in one turn and receives 50 points for it.

Her favorite word she has ever played in her Scrabble career, she said, was “unlovely,” a “triple-triple” (played across two triple word score spaces) earning her a whopping 167 points.

The highest ranked Scrabble player in Texas — a Houston professor by the name of Orry Swift — has a rating of 2,016.

“I used to be a much higher rated player, but I don’t have anybody to play with here in Kerrville,” said Gaudier. “(So) I have to really struggle just to keep my rating where it is.

“I really wish I could find people here (in Kerrville) who wanted to learn to play competition-style Scrabble,” she added. “To be an official club, there are some requirements … but we could have an informal Scrabble club, and if we got enough people who were interested, then somebody could get the certification.”

The closest Scrabble clubs to Kerrville are in San Antonio and Schertz, Gaudier said.

“I think the closest (competitive) Scrabble player to me that I know of is 50 miles away,” she added, noting that an important piece of the tournament experience is social.

“And of course, you can also get some vacationing in. Once I started playing in tournaments, I had a chance to visit some other parts of the state I hadn’t seen, and I traveled and played Scrabble,” she said.

Last year, Gaudier competed in New Orleans, and the year before in Fort Wayne, Indiana. Competitors play during the day and then hang out, eat and sight-see at night, she said.

Gaudier and her husband have also gone on two Scrabble cruises — one to Alaska and one through the North Atlantic — where players hone their skills aboard a cruise ship. They plan to attend another next year, she said.

If Gaudier could give any advice to aspiring Scrabble players, it would be this:

“Just play. Even if it means that you’re playing your aunt Sally or something. Just play. The first way to improve your Scrabble skills is to play Scrabble.”