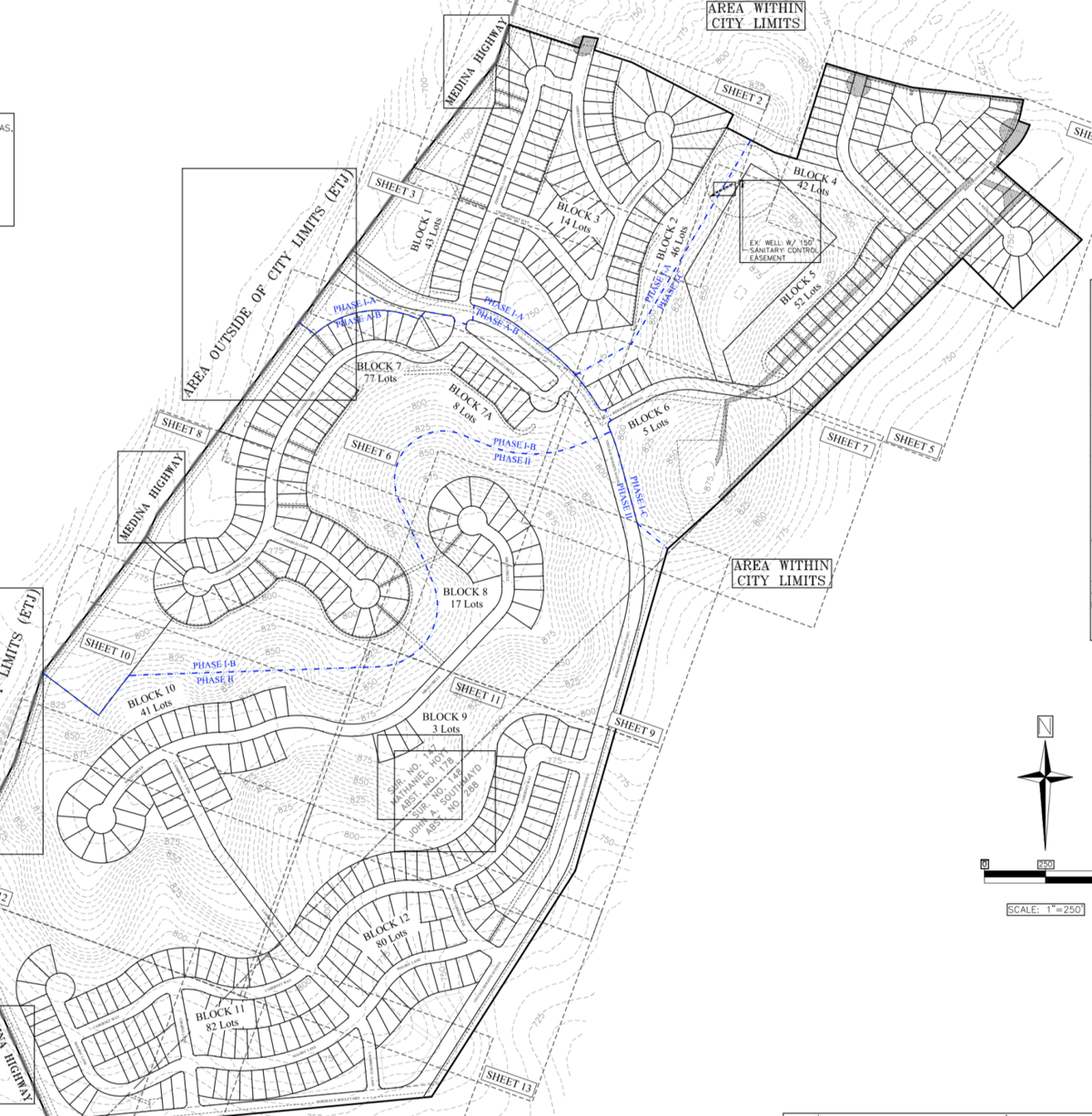 The city of Kerrville Planning and Zoning Commission will hear a first reading next Thursday afternoon about a proposal to build 510 homes in a development named Vintage Heights just south of the Riverhill area along the east side of Medina Highway.

The commission is being asked to change the zoning to a medium density residential development that will feature some lot sizes as small as 5,400-square feet. Other lots, however, will range from 8,000-square feet to nearly 20,000-square feet. City staff says the plan is a significant opportunity for the city, aligning with the city’s need for workforce housing. While the builder has not been identified, the plans have been submitted by Wellborn Engineering.

WHEN IS THE MEETING

The Planning and Zoning Commission will meet at 4:30 p.m. on Thursday in the City Council Chambers, 701 Main Street. The public hearing on this matter is first on the agenda.

The project will sit on more than 200 acres, just east of Medina Highway, and just south of Riverhill Boulevard. The new project will feature streets named for wine varietals: Chardonnay, Zinfandel, etc. While the scale of the project represents one of the largest recent developments in city history, the maps provided to the city show open space throughout the project.

It will also likely add a new major intersection to the city with the entrance slated to be on a new street called Vintage Heights Avenue that will allow access to the development.

Since the land was zoned for large single family home estates, those on large lot sizes, but city planners mapped out these reasons for the changes:

I live outside Memphis Tennessee in a small town called Oakland. We moved from the adjacent Shelby County to cut our property taxes in half and for safety. We and others built lovely houses only to have D R Horton come in and buy out all of the listing lots and put up houses half the size. They all look alike and if they were painted green they could look like Monopoly houses. The loans for these houses are for people who make no more than 65,000 household income and allows people to move in for ZERO down, ZERO closing costs, and Horton gives every house free appliances and free wood blinds. IOW - there is no skin in the game for the buyer. Two of the forty have closed and are occupied. The cars are parked on the street with the hoods secured with bungee cords. My sister lives in a gorgeous home on acreage in Kerrville and was telling me about this and I said - it has to be D R Horton. Sure enough, she sent me a copy of an article today that it is.

Now we know why city council meets in private before every regularly scheduled meeting to discuss items that might be questioned by citizens who will be impacted by discussions held in the back room. I thought the "be kind" mayor & real estate council ran on transparency. This project has been on the table for a long time, hidden in closed meetings. Hey, not to worry, it's good for real estate agents and Title companies.

Contrary to the project summary on the Planning & Zoning Commission agenda, the nonresident traffic "cut through" issue has not been significantly mitigated and/or resolved and continues to be is an ongoing safety hazard for the local residents. Dumping all these additional vehicles will only exponentially increase the problem. Before any approval of the change, the developers must come up with a solution that provides other egress and through traffic roadways for this subdivision.

Is this the affordable housing that the mayor is talking about? According to the RFP that was published, affordable housing is for those households making between 48k and 72k a year. I doubt that these homes will help those at 48k.

Word is it is DR Horton. Lil ole Kerrpatch is growing. This will have a huge impact on us but it is necessary. Traffic and schools will be the first big issue. They should have to include an elementary school in the development plan at a minimum.

Do you approve or disapprove how Gov. Greg Abbott has handled the coronavirus pandemic?

The coronavirus pandemic has surged since the middle of June leading Gov. Greg Abbott to issue a mask order for the state.