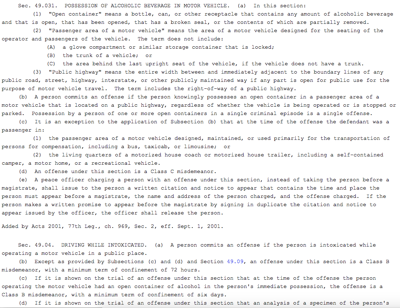 A grand jury for the 216th Judicial District has accused several people of felony driving while intoxicated in Kerr County.

The majority of DWI charges in Texas are misdemeanors. However, anyone who already has at least two DWI convictions faces a felony charge if accused of another DWI. Having a child passenger — a child being defined in the statute as someone younger than 15 — while committing a DWI also is a felony.

Those newly under indictment include:

Sad to continue to see all of the DUI arrests in Kerr Co., but glad our law enforcement officers are on the ball and catching them prior to a crash and tragedy. Now, on the many who have felony arrests (multiple DUI's or children in vehicle) they seem to have an obvious alcohol/drug problem which needs curing - or - they are just plain stupid or don't care about other people at all. Not much can be done probably about the latter two types. But, if under qualified exams they are shown to have a medical addiction, would not it be wiser to have them held for enough time (6 mos - year?) in a quality addiction program facility and "cleaned up"? Then in a community service plan further demonstrating the fallicy of continued addiction? Just a thought, that it might be better for the addict, their family and our community rather than sticking them in long-term jail or prison and exposing them to further criminals and activities, with drugs available, plus ruining their job potential afterwards? The way we have been doing it the past decades does not seem to be working and has a high cost in human lives and in taxpayer costs. What about it District Attorneys, Judges and Defense Attorneys?