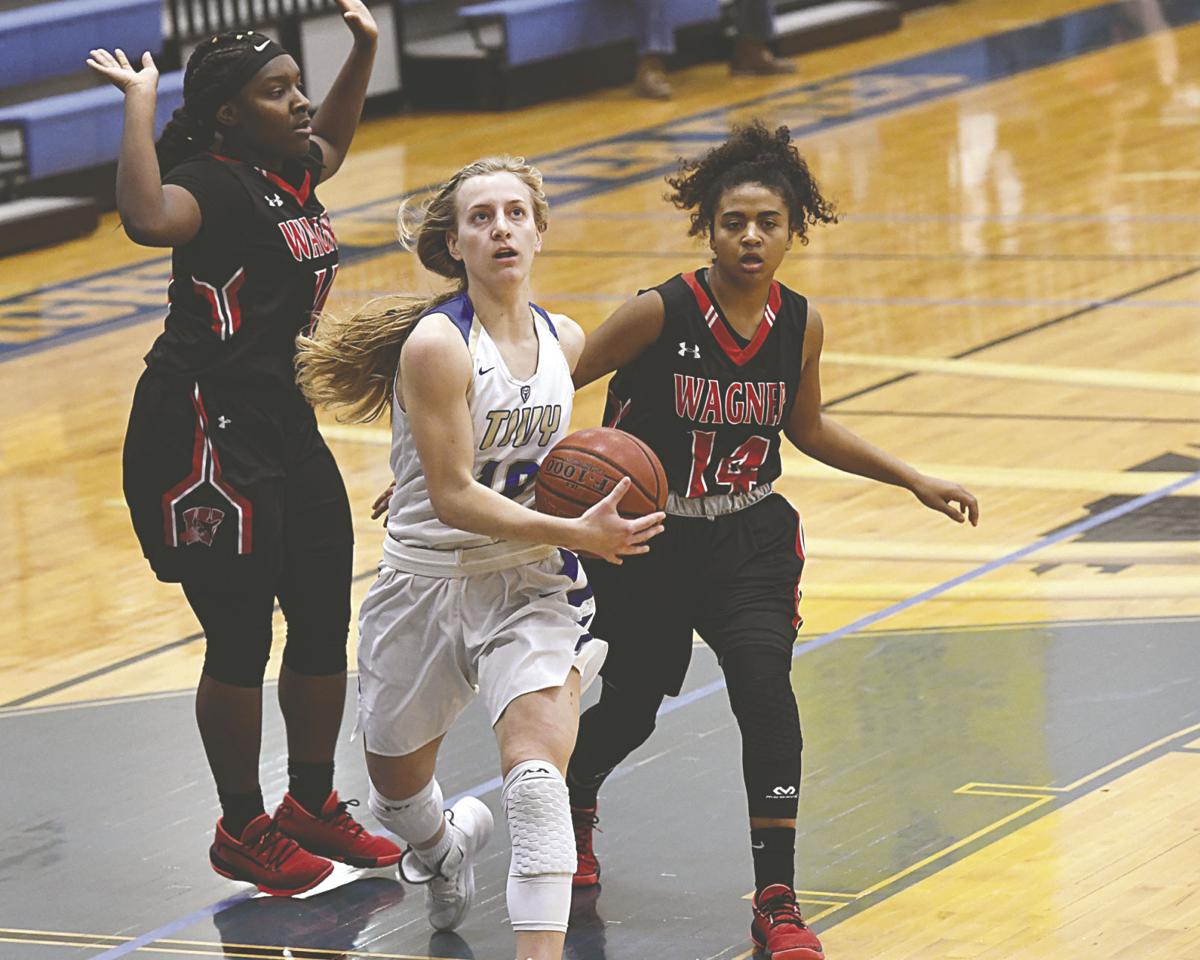 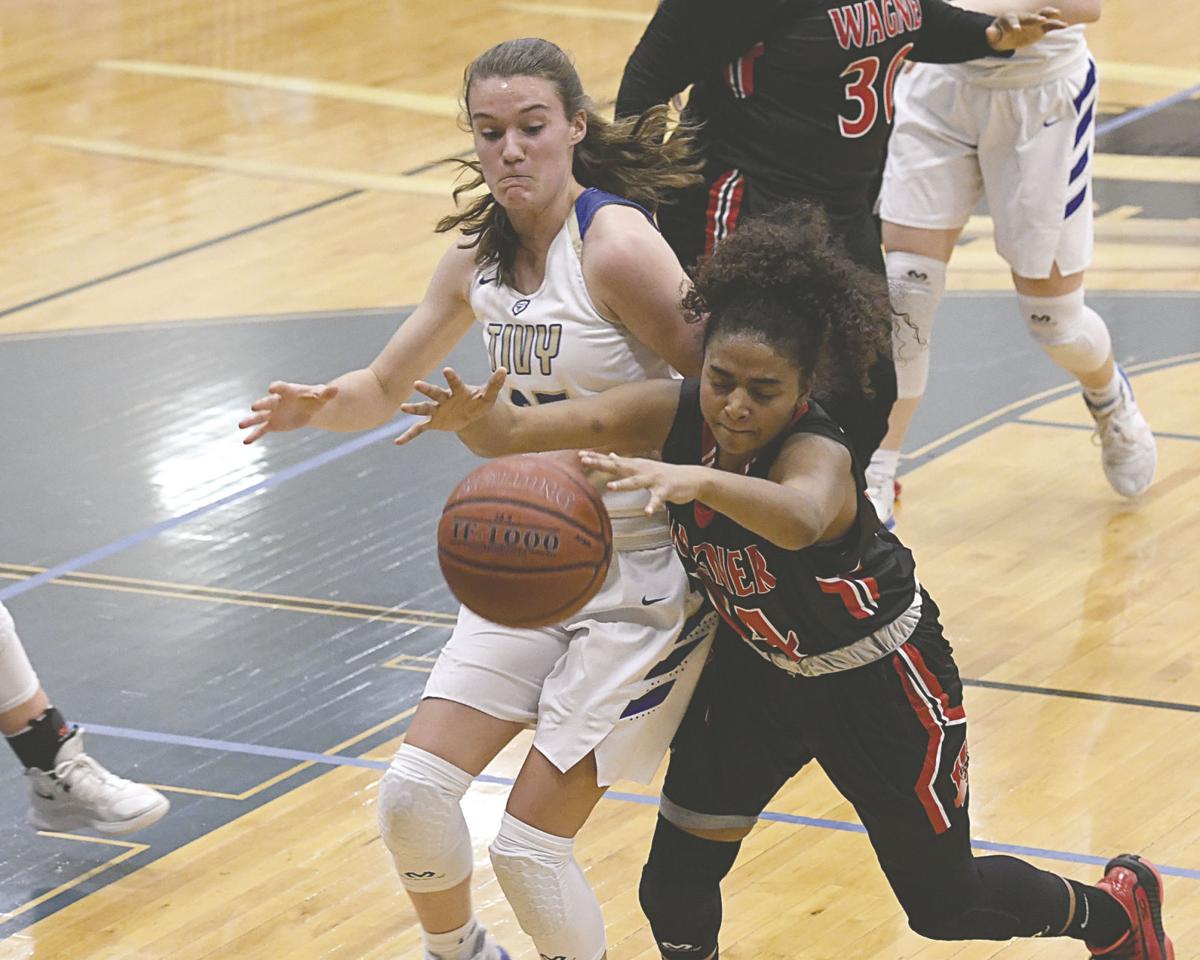 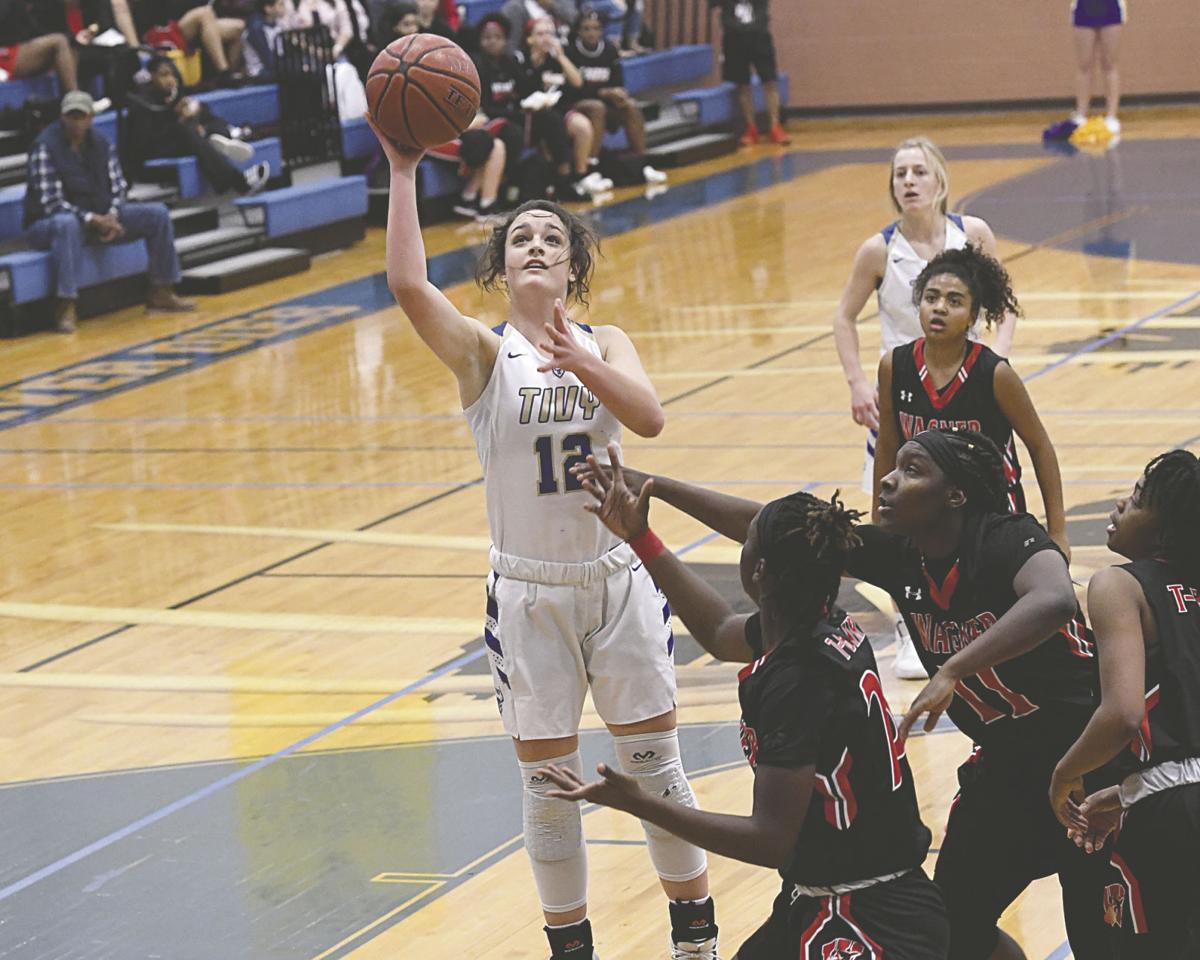 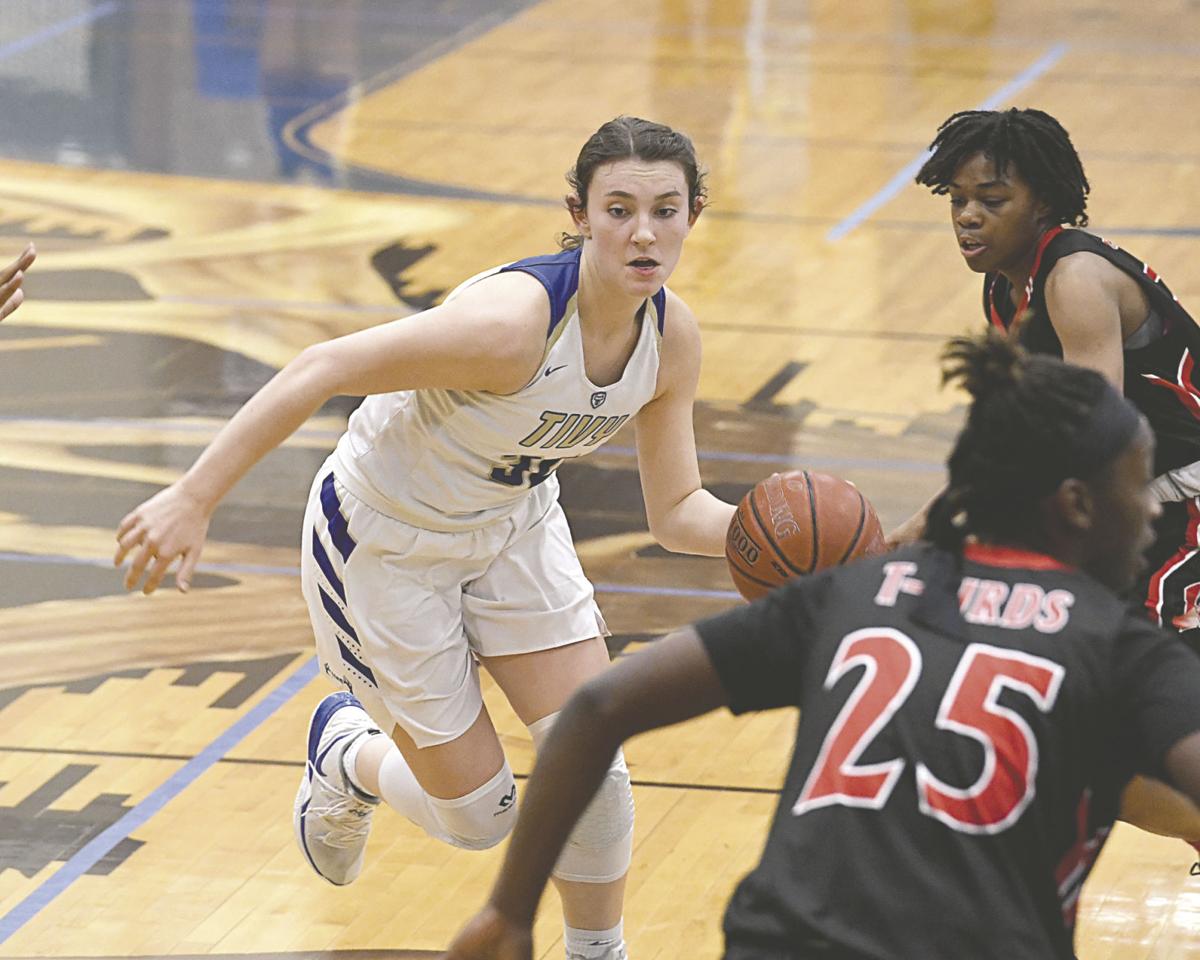 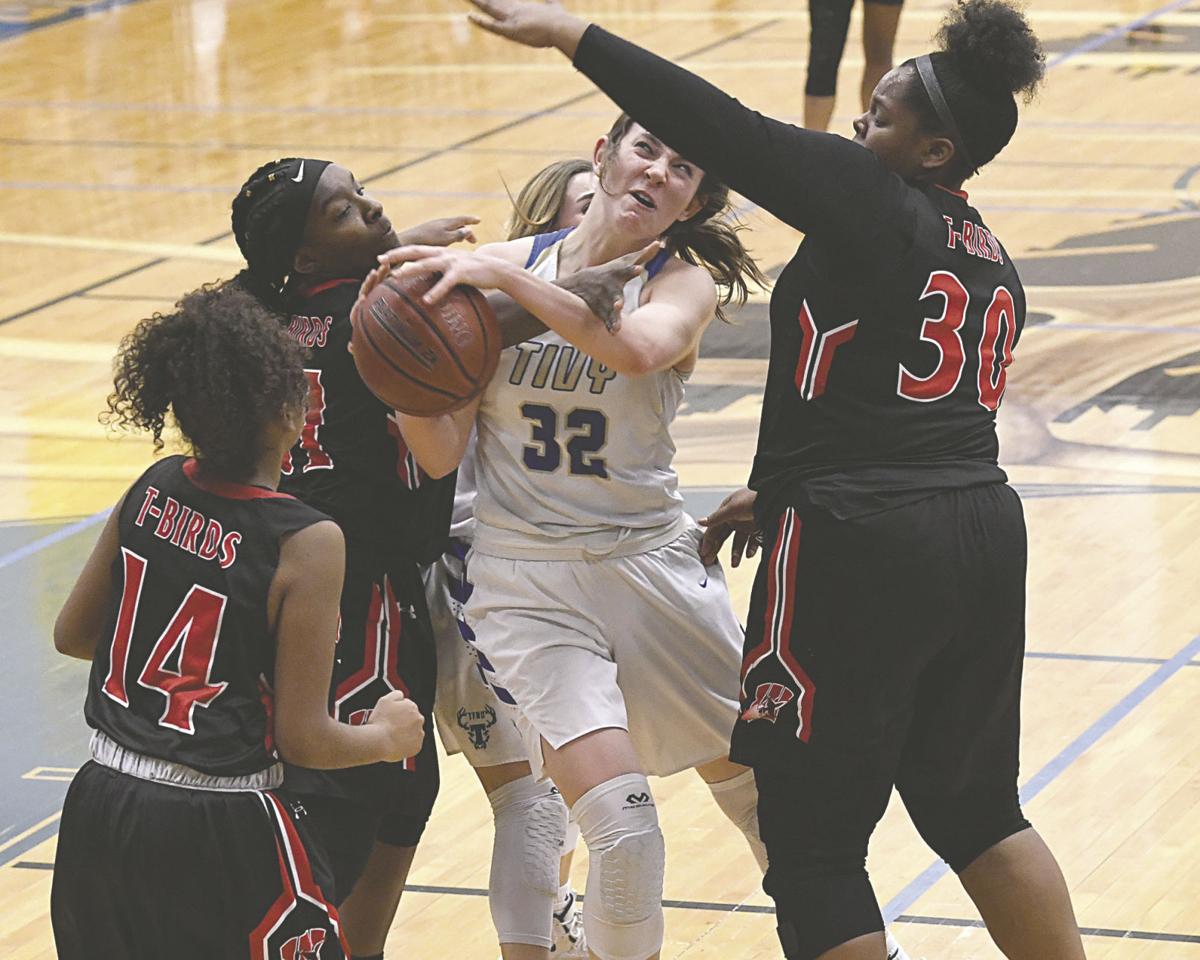 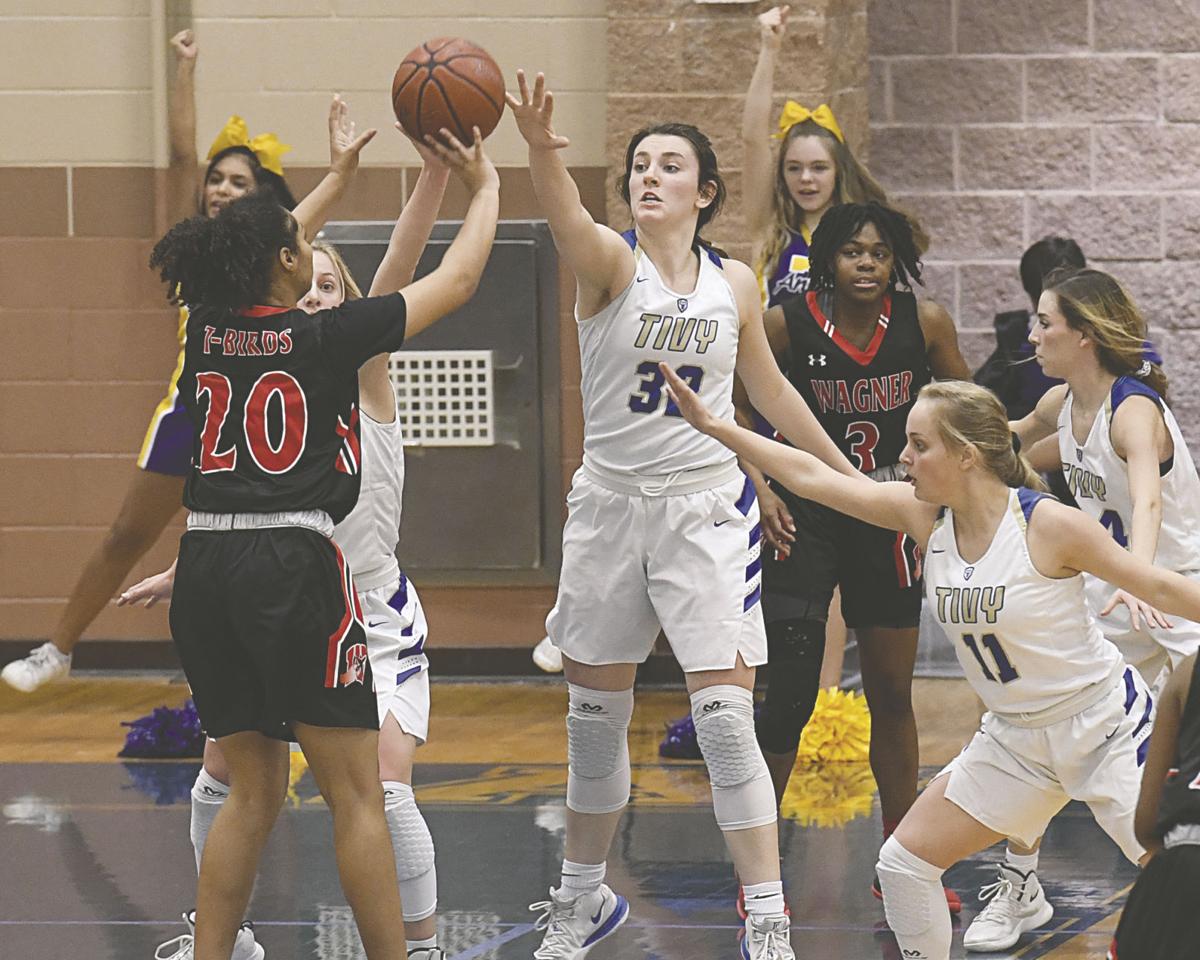 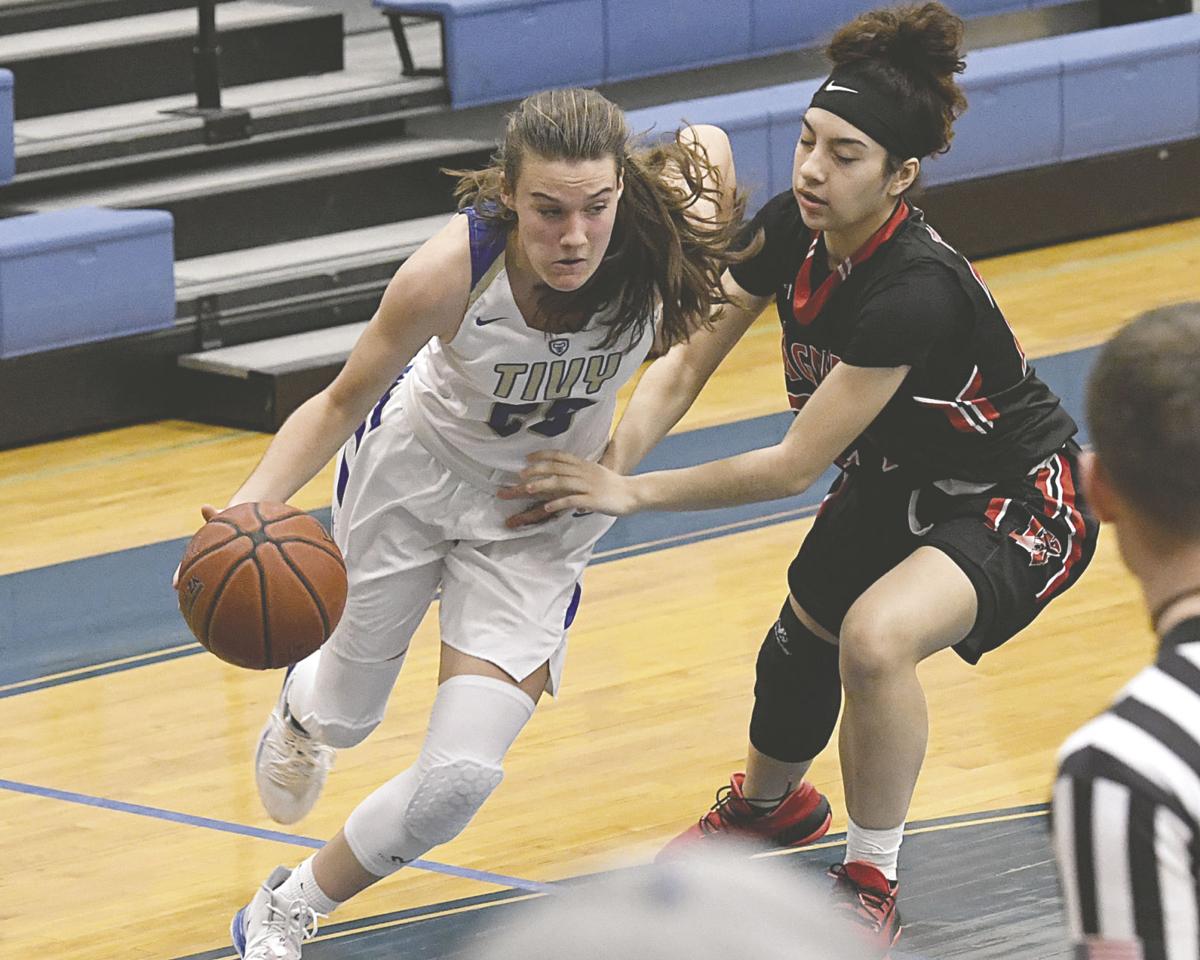 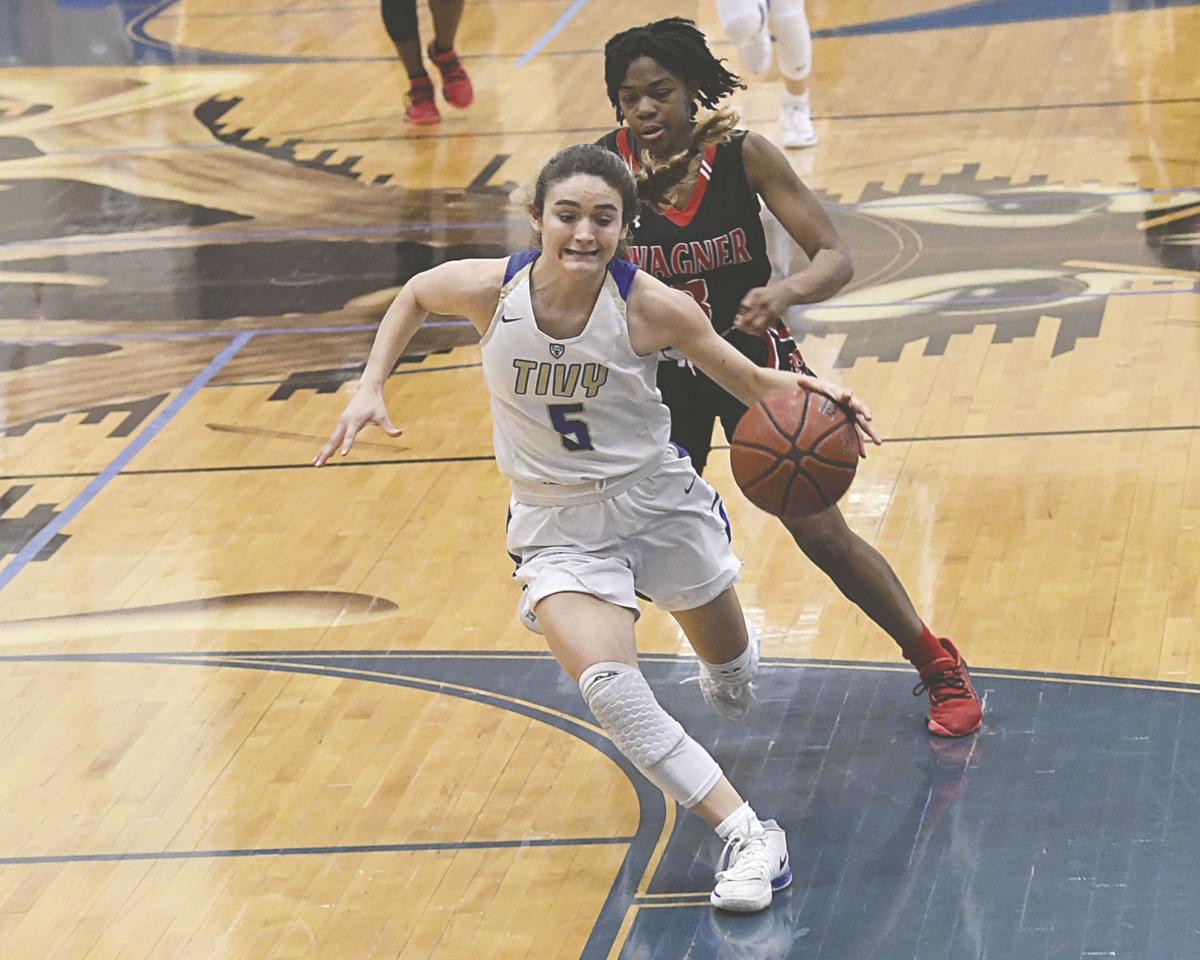 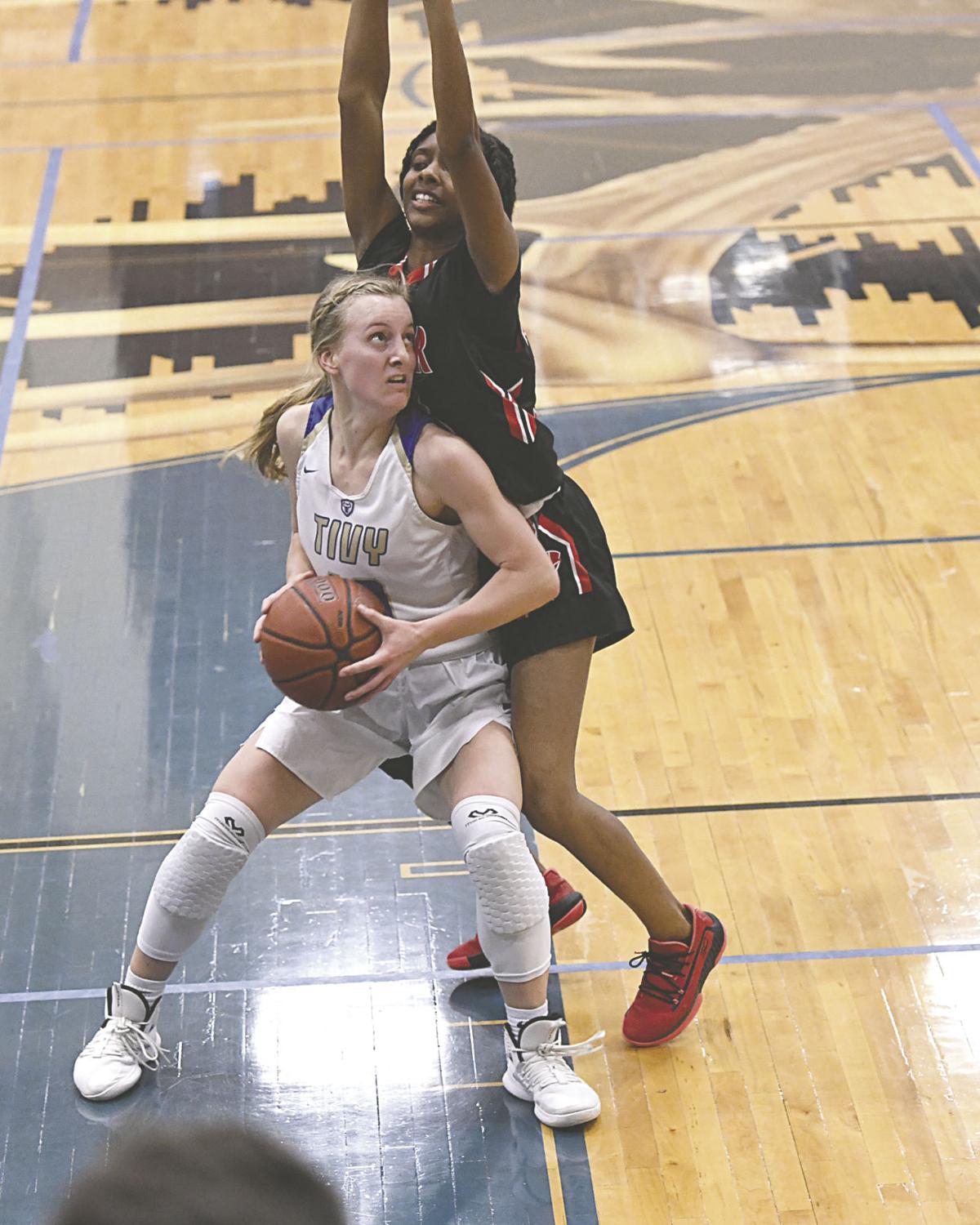 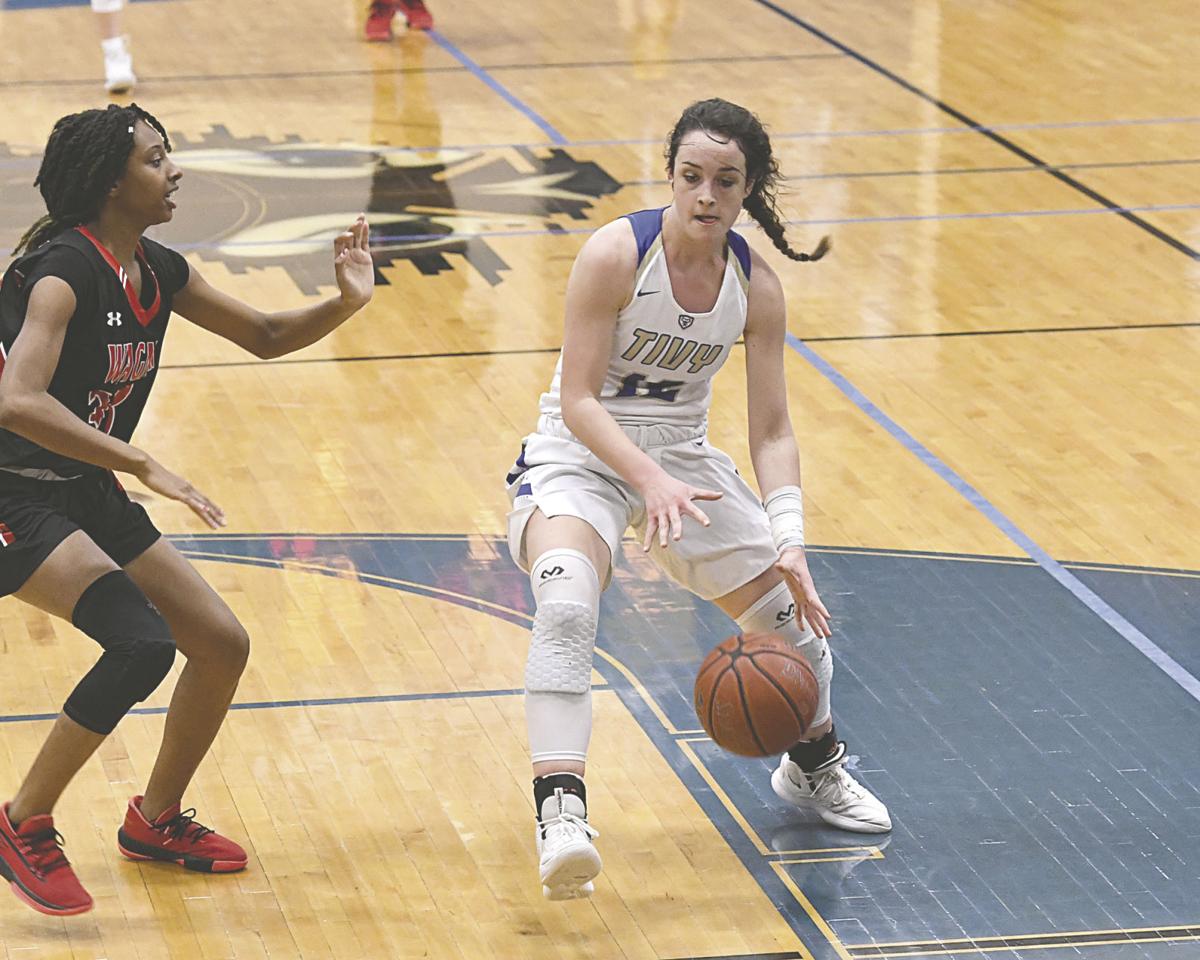 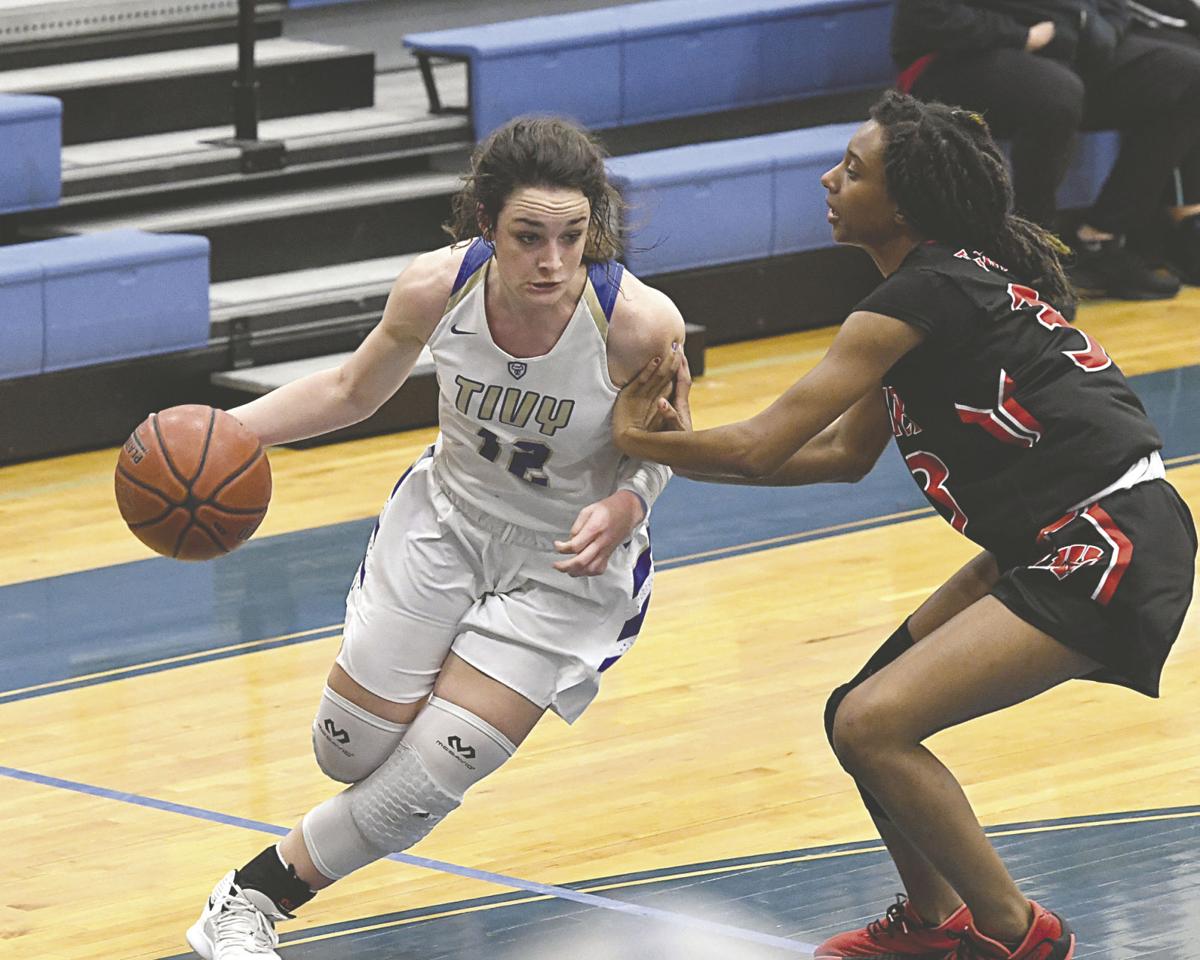 As the Tivy fans inside a packed Antler Gym roared their approval, Audrey Robertson didn’t even flash a smile.

Robertson had just driven the length of the court, absorbed contact from a Wagner defender and still banked in the shot, earning an opportunity to go to the foul line to give the Lady Antlers’ their 18th unanswered point in the third quarter. After an uneven first half, the Lady Antlers were dominating Wagner in the second half.

Robertson, though, wasn’t in the mood to celebrate. At least, not yet. With the Lady Antlers trailing by four at halftime, Tivy coach Christy Dill had urged Robertson and her teammates to give everything they have in the second half, so they could walk off the court proud regardless of the final score. Robertson was intent on following her coach’s orders.

So after scoring a bucket and drawing a foul, Robertson simply dished high fives to teammates, Ashlynn Way and Ashlee Zirkel and coolly buried the free throw to cap an 18-0 run that lifted the Lady Antlers to a 66-55 over Wagner on Friday night, keeping their hopes alive to win a fourth-consecutive district title. The Tivy girls (26-4, 12-1 District 26-5A) have a chance to move into a tie for first place in the standing when they visit Veterans Memorial (24-7, 14-0) on Tuesday.

“Instead of crumbling when it gets tough, they just find a different way to get the job done,” Dill said. “They are very good at adapting, staying together as a team and pushing through adversity. … They are super coachable, work hard and are mentally tough.”

And on Friday, they proved they have the ability to win another Region IV title. The Lady Thunderbirds are a very good team. They entered the game on a six-game winning streak; their last setback was a 54-52 loss on the road to a state-ranked Veterans Memorial team. They also executed a strong game plan against Tivy. After mainly playing man-to-man defense in a 65-51 loss to Tivy on Dec. 31, the Lady Thunderbirds deployed a 2-3 zone. The strategy worked, with Wagner building a 26-16 lead midway through the second quarter.

The Lady Antlers didn’t just melt that deficit, they did so without playing perfect basketball. When Dill watches the game film, she will see too many unforced turnovers (Tivy committed 20) and too many missed free throws.

The Lady Antlers could have played better basketball, yet still triumphed over a really good team — ultimately because they now believe they are going to win every game. That was obvious on Friday. Earlier in the day, Clay Robertson told his youngest daughter he was nervous wreck over the upcoming game. Audrey Robertson replied that she couldn’t wait to play.

“It was very rewarding, to not only do our best and work our butts off, but to win too,” Audrey Robertson said. “Everyone

contributed in an insanely amazing way. … They are a very scrappy team and they are very good team, and it was so rewarding to beat them.”

The Lady Antlers also won on Friday because Dill made a crafty adjustment of her own. At the beginning of the second half, she had Zirkel trap Wagner’s guards. The Lady Thunderbirds didn’t have an answer for Zirkel’s athleticism. After Becker knifed through the lane for a layup to begin the second half, Zirkel forced steals on back-to-back possessions, and scored two more layups to give the Lady Antlers a 37-35 advantage. They never trailed again.

“She’s so tenacious,” Audrey Robertson said. “I hate being guarded by Ashlee in practice, because she’s all up in your grill.”

Wagner learned that lesson the hard way during the second half. After the Lady Antlers began the third on a 18-0, the Lady Thunderbirds never cut the deficit to less than nine.

They tried to rally in the fourth. Trailing 61-50, they forced a steal and looked like they were going to score in transition. Becker, though, extinguished any remaining comeback hopes, emphatically swatting away the layup attempt, and giving Tivy’s fans one more opportunity to cheer a spuad that looks more like a championship team every game.

“We have come a long way from the beginning of the season,” Audrey Robertson said. “We are all such good friends, which helps amazingly on the court. … The chemistry is there. To know that we’ve come this far and that we have worked so hard to beat a team this good not once, but twice, is really rewarding.”