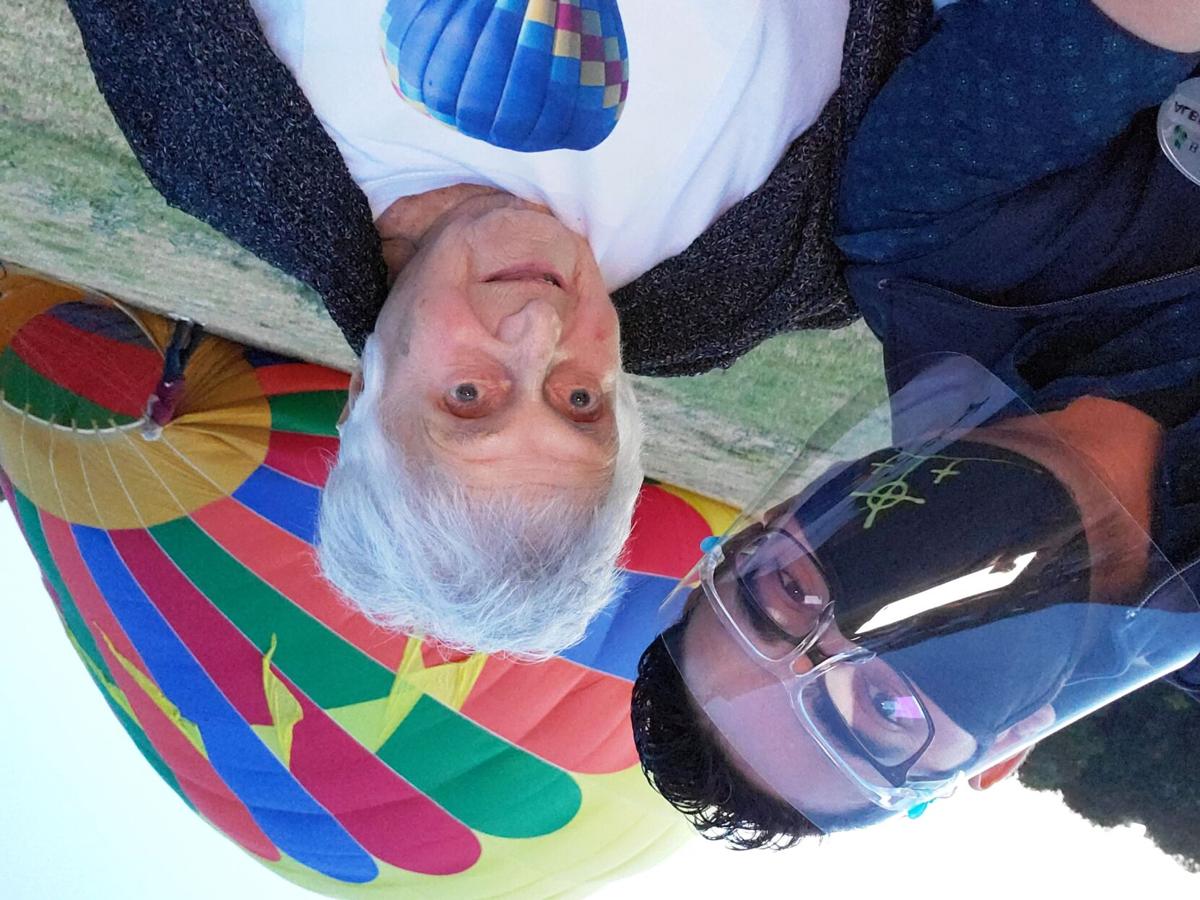 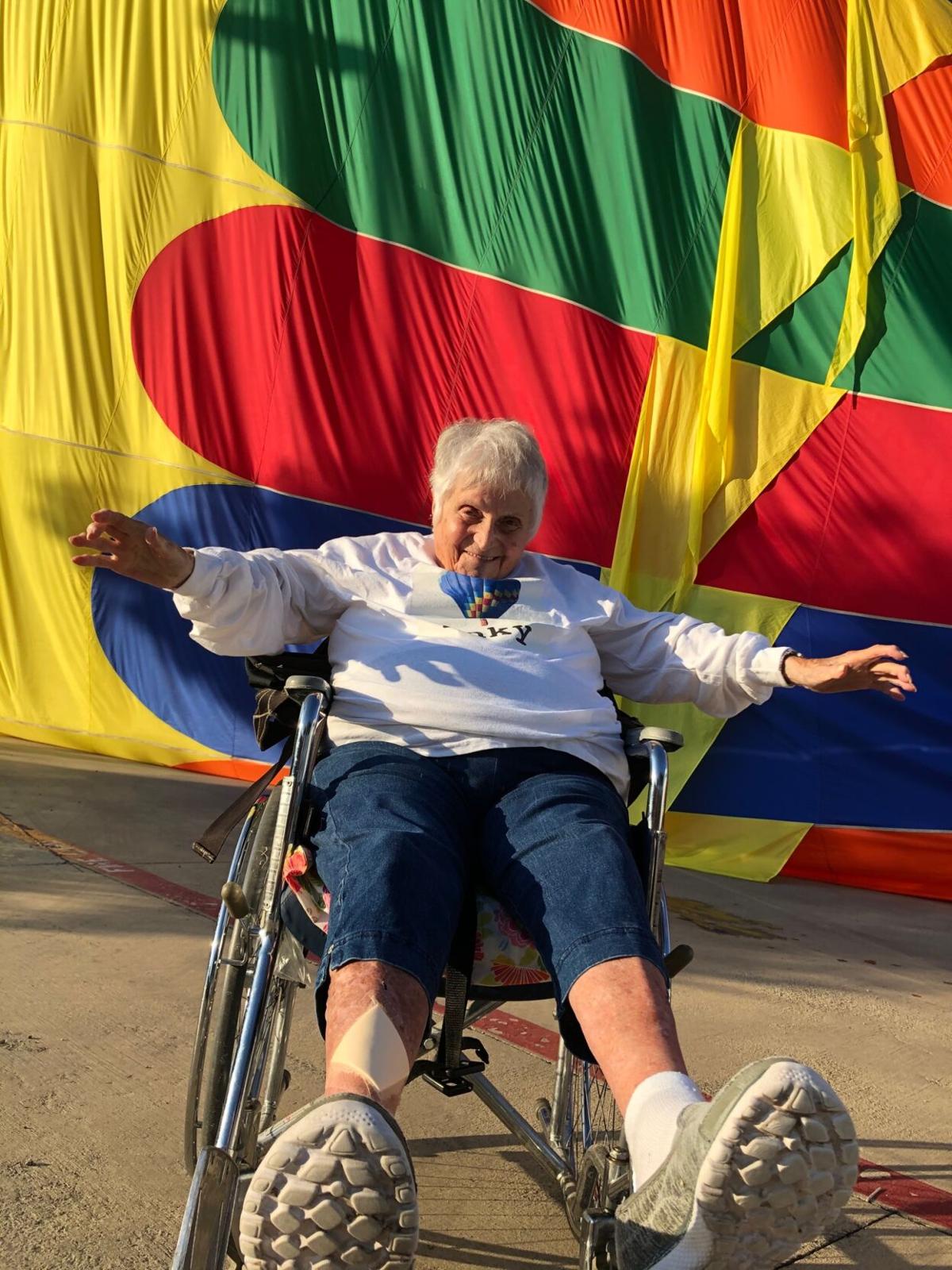 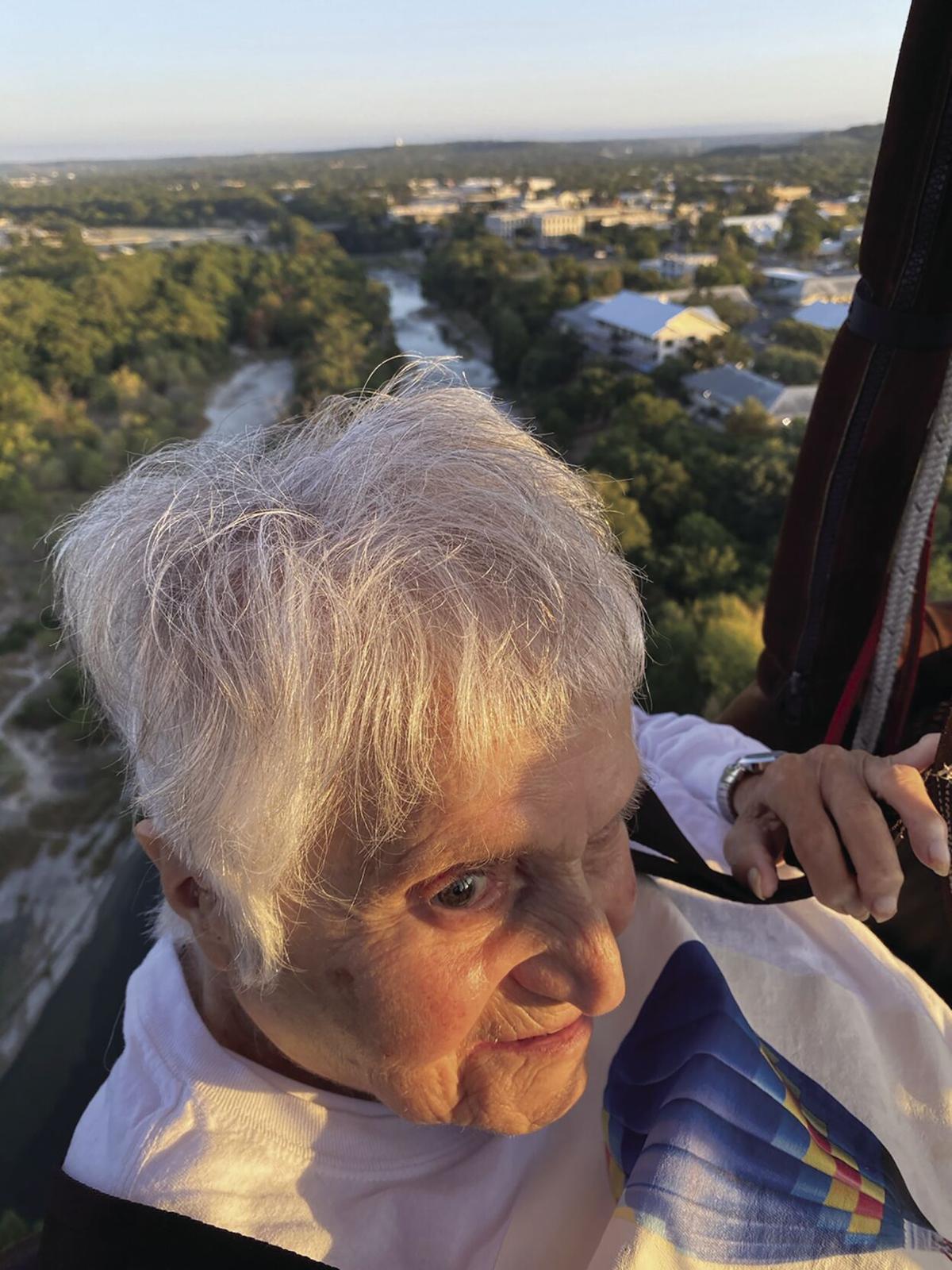 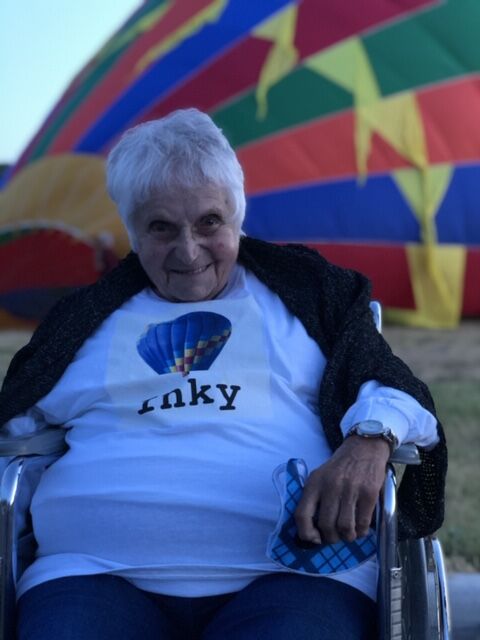 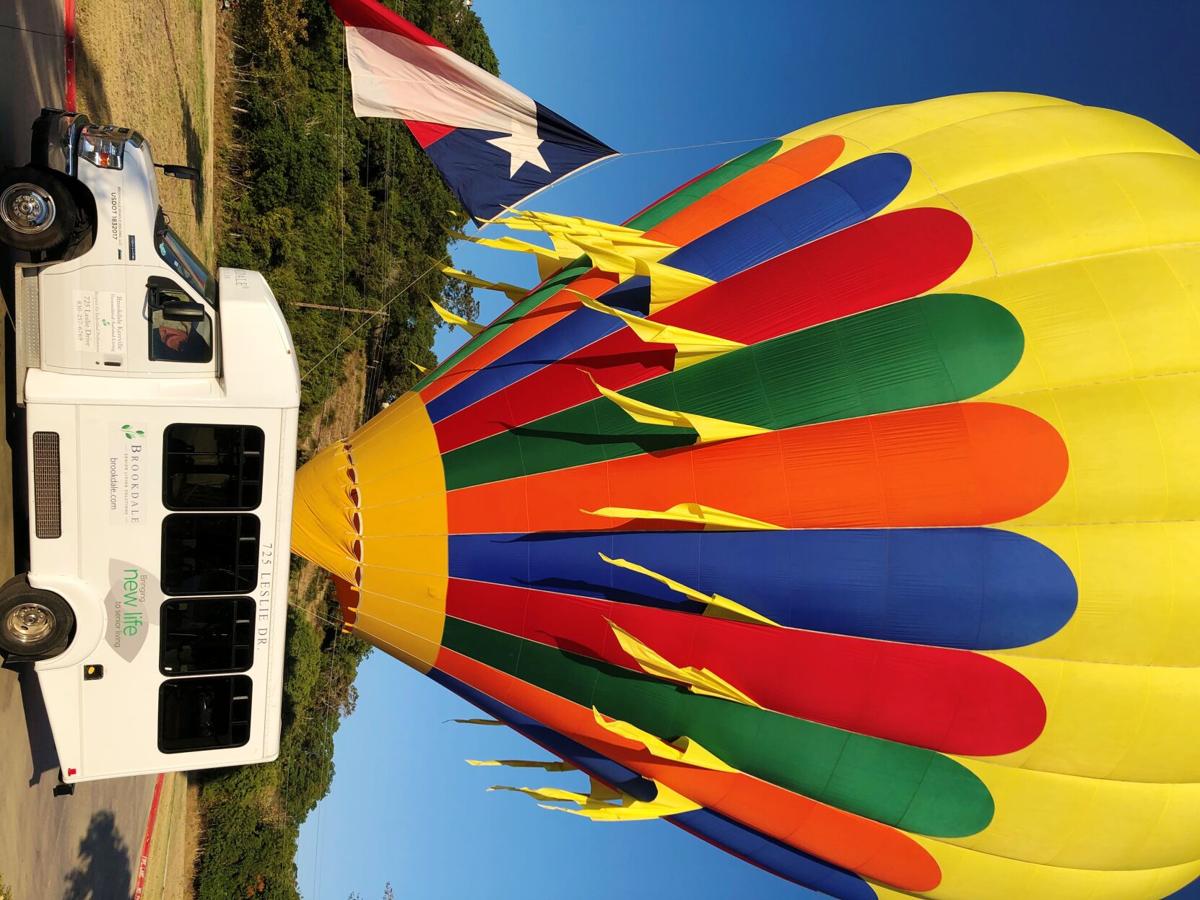 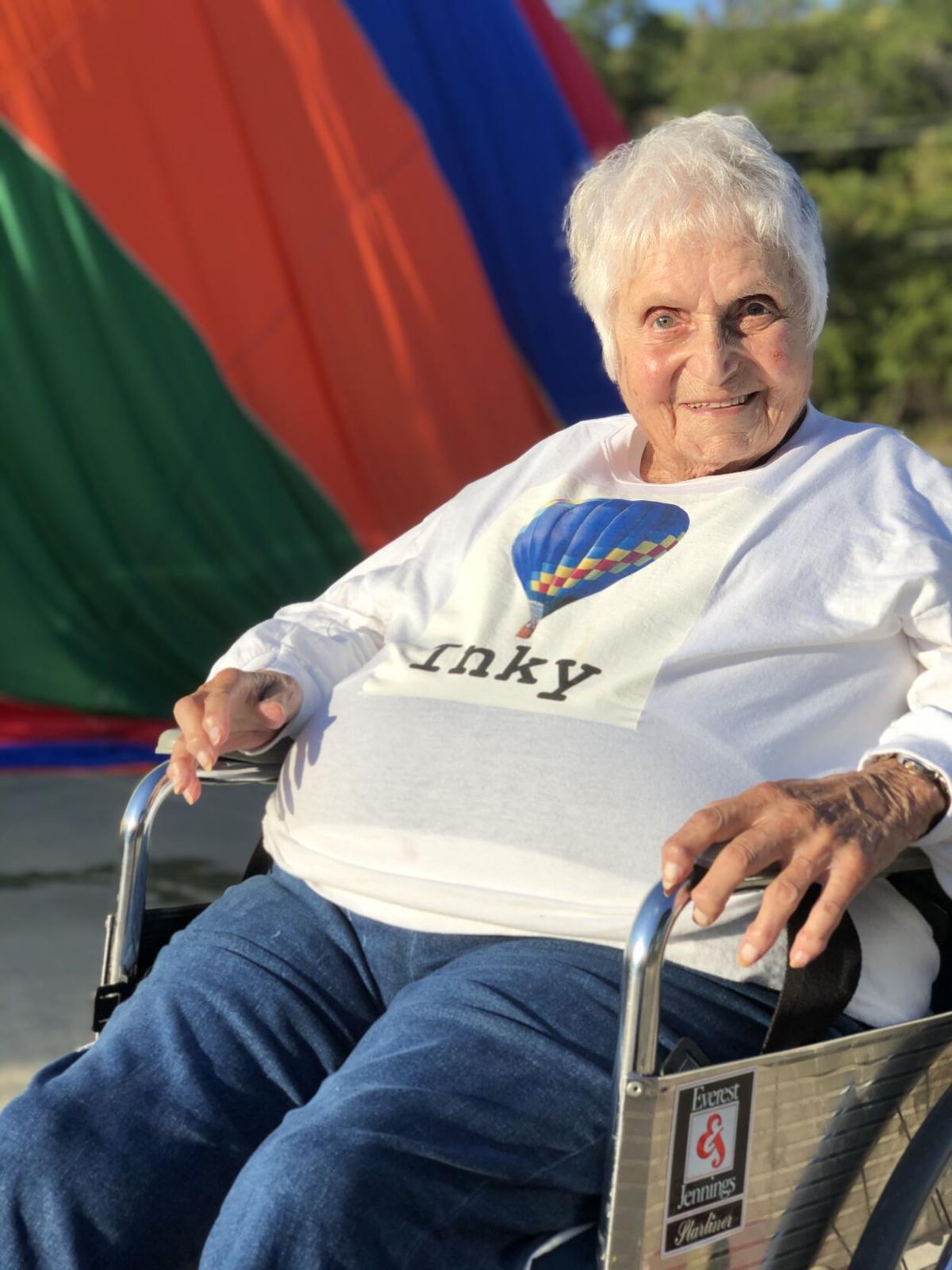 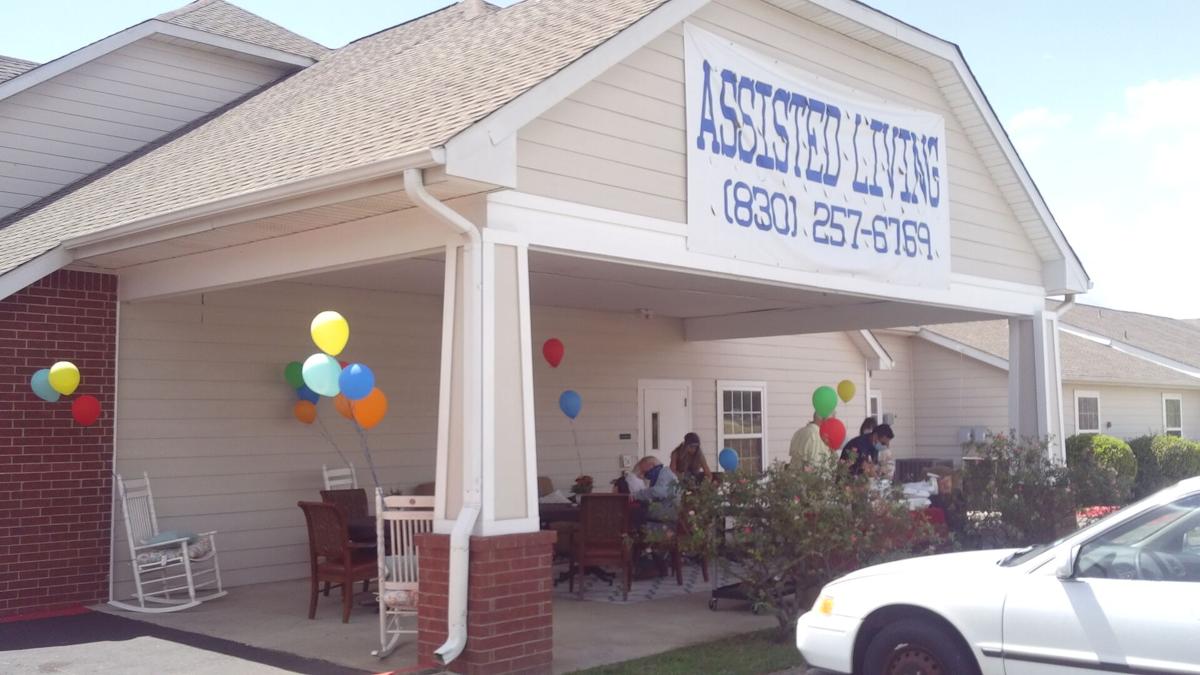 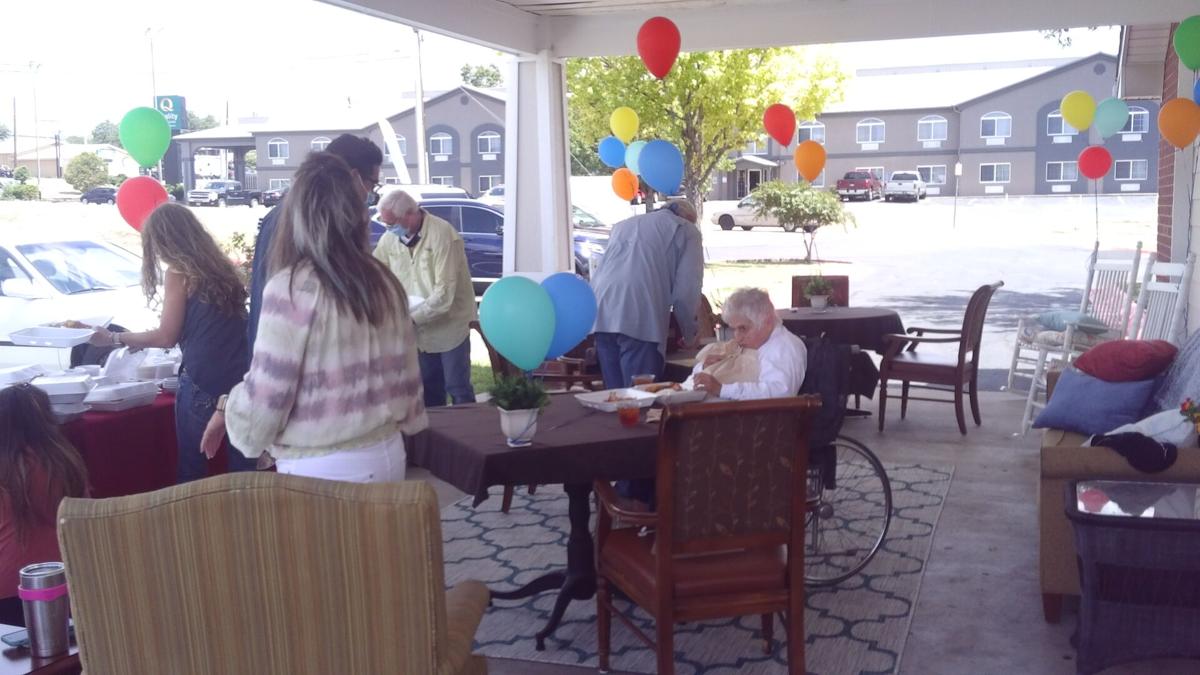 Following a ride in a hot-air balloon over the Guadalupe River, 98-year-old Inky Blumenthal was treated to a lunch of lobster, alligator, frog legs and shrimp at the Kerrville assisted living center where she lives.

As the exotic lunch she’d requested made its way to her from LaFour’s Seafood Restaurant, Blumenthal sat in a dining area set up outside her home, Brookdale Kerrville, on Aug. 27 a few hours after her adventure in the sky.

“It was very calming,” Blumenthal said of the balloon ride, which took off from Louise Hays Park.

The city of Kerrville shared the news of Blumenthal’s balloon ride on social media, and dozens of people responded, posting birthday wishes — she turns 99 next month.

Speaking with a German accent, Blumenthal described her memoir that’s scheduled to be published on Amazon on Sept. 7 — her birthday. Some of the proceeds from book sales will be donated to a Jewish memorial in Washington, D.C., she said. Blumenthal escaped the Holocaust when her family fled Germany in the 1930s.

“It’s unbelievable what they did,” Blumenthal said. “My (former) in-laws were gassed.

“I’ve lived in four countries and learned five languages — four and a half, because Spanish is similar to Italian,” she said.

“By the time we left (Germany), I was 11, so I won’t tell you my age now,” Blumenthal joked. “Age is just a number. It depends on how you feel. I feel pretty good. The only thing I lost was the willpower to walk. Otherwise I don’t have any complaints.”

Although she was in a wheelchair, Blumenthal expressed confidence she’d be back on her feet again, mentioning a surgery that could help. She appeared to generally have a positive outlook and asked if she could be of any help as Brookdale staff prepared the dining area.

“It’s a beautiful day, one of the nicest days I’ve spent here — there’s a breeze, it’s not damp, muggy,” Blumenthal said as the food was laid out for her, Brookdale staff, individuals with Austin Aeronauts Inc. — the balloon company — and Elisabeth Cox.

Cox, who helps her life partner, John Oliver, plan entertainment and fundraisers at The Bandera Ale Project he co-owns, helped care for Blumenthal in Bandera, where the latter had settled in an RV —  the same RV Blumenthal traveled the country in alongside her second husband of 20 years. Oliver was on hand earlier in the day helping Blumenthal get in and out of the hot air balloon basket. Cox helped out at the balloon ride and lunch — she relayed questions to Blumenthal, whose hearing aid was malfunctioning, and even cut the lobster tail for the older woman.

“The thing about Inky is she’s all about making lemons out of lemonade,” Cox said. “If there’s an obstacle, she’ll overcome it. ‘When a door closes, a window opens’ — she says that frequently.”

Editor's note: This article has been edited to say Blumenthal left Germany in the 1930s, and proceeds from her book will go to a Holocaust memorial.