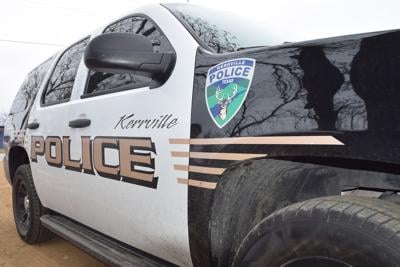 A 41-year-old Kerrville man was arrested for the 26th time in Kerr County, this time on suspicion of shoplifting at Walmart.

About 12:30 p.m. Nov. 18, a KPD officer was dispatched to Walmart to investigate a report of theft, according to Sgt. Jonathan Lamb, KPD spokesman.

The officer responded and contacted a loss-prevention employee who reported he had observed a man later identified as Rene Alexander Charnichart take his shoes off in the shoe section of the store and put a new pair of shoes on his feet, then proceed to walk around the store with the new shoes on, Lamb said in a Nov. 20 email.

“He also saw Charnichart conceal two Bluetooth speakers and a four pack small wine bottles on his person before he attempted to exit the store, passing all points of sale and opportunities to pay for the shoes, speakers, and wine,” Lamb’s email states. “The merchandise was valued at $33.87.”

Charnichart was arrested and booked into the Kerr County jail on suspicion of misdemeanor theft. Records were not immediately available indicating whether he had been released.

According to county records, Charnichart has been convicted of felony unauthorized use of a vehicle, failing to stop and render aid after a crash, causing a crash that led to $200 in damage, theft of service, driving while intoxicated, failure to identify a fugitive and possession of less than 2 ounces of marijuana.

He has pending charges of:

Who should take the COVID-19 vaccine?

Later this month, the FDA will consider approval of two vaccines made by Pfizer and Moderna. Current estimates project that no more than 20 million doses of each vaccine will be available by the end of 2020. Each product requires two doses. Who should take this vaccine?