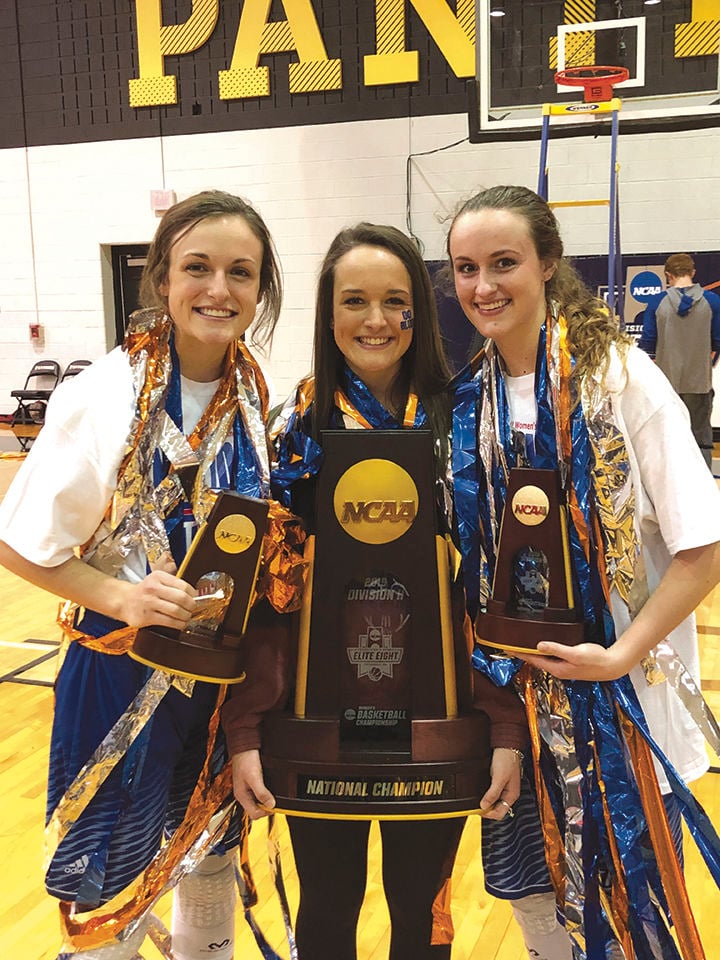 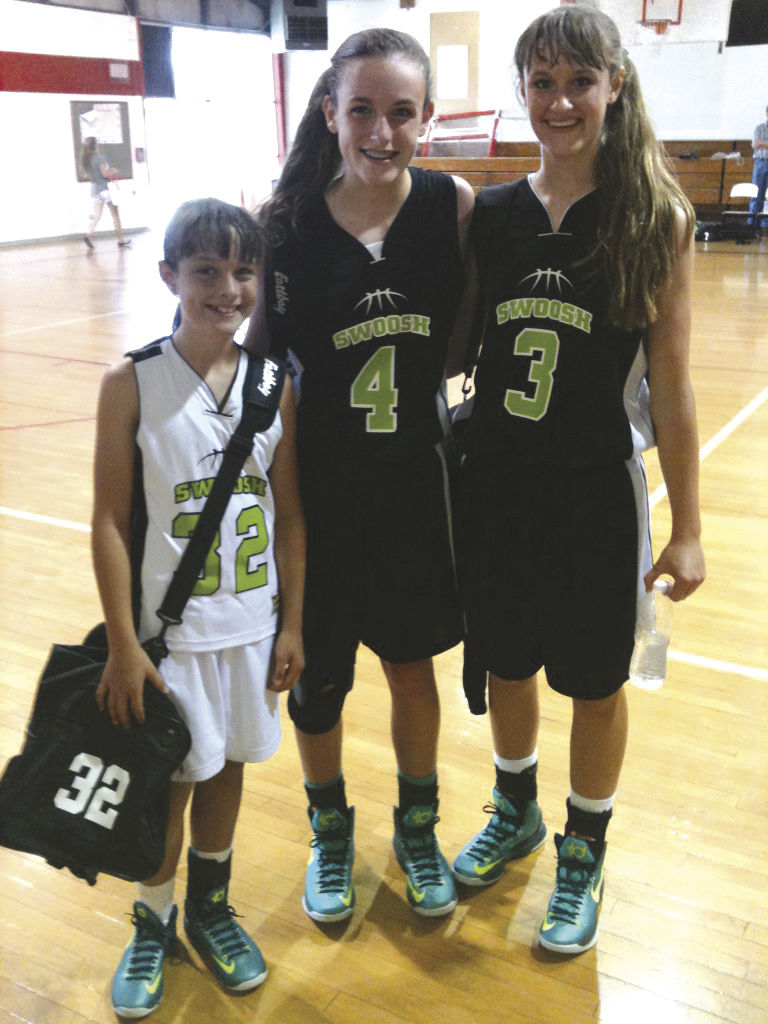 Audrey Robertson was 3 years old when she first gained admittance to the family shootaround.

During these sessions, Clay Robertson taught his three daughters the sport’s fundamentals in his driveway, helping his youngest daughter, Audrey, learn how to shoot on an 8-foot goal.

It was during these father-daughter moments when Audrey fell love in love with basketball. Her father and two sisters, Olivia and Juliana Robertson, made sure she remained dedicated to the sport. Clay, a former Schreiner guard and Tivy’s all-time assist leader, coached Audrey’s select travel team, Kerrville Swoosh. Olivia and Juliana remained her two biggest role models.

So naturally, everyone expected Audrey to be great when she made Tivy’s varsity team her sophomore year, just because she was a Robertson. She admitted she initially felt the pressure, worrying that she would never be as good as her sisters.

But she didn’t let those anxieties stop her from creating her own legacy at Tivy.

As a junior last season, she was an all-state selection, helping the Lady Antlers earn a berth in the state tournament for the second straight year. She’s been even better in her final year, averaging 16.7 points, 7.6 rebounds, 4.5 steals and 2.7 assists per game to help Tivy finish the regular season with a 28-5 record. The Lady Antlers hope to embark on another deep playoff run when they play Austin LBJ in the bi-district round Monday in Dripping Springs.

But it’s been Audrey’s ability to mentor a group of first-year varsity players that has allowed the Lady Antlers to prosper this season. Dill has said several times this season that Audrey and her senior teammates have been some of the best leaders she’s coached. They have made this season a joyful experience for the underclassmen.

“We (seniors) have tried to make it really fun because it’s our last year and we have tried to soak up every moment, which has made the season even better,” Audrey said Monday in Dill’s office. “I talked to (seniors) Liz Twiss, Presleigh Way and Julia Becker, and told them I actually look forward to coming to practices this year.”

“I guess I am going to have to make them harder then,” quipped Dill, sitting next to Audrey.

Deep down, Dill is also trying to savor every remaining moment this season. For nine years, she has coached at least one Robertson sister. For nine years, she has heard Clay chastise officials from the bleachers, has enjoyed Allison Robertson’s famous sopapilla cheesecake that she serves during team dinners and has watched the couple’s children make spectacular plays on the court.

It’s hard to imagine the Tivy girls basketball program without a Robertson, but one thing is certain: Dill is going to miss the trio.

“(Audrey) is a really good person — a good example both on and off the court,” Dill said. “(The Robertsons) have been a great family to work with. Each one has brought their own strengths to the program and has made us better. … It’s going to be very strange not having one of them on the team.”

During the summer when she was still in high school, Olivia barged into Audrey’s room every morning at 8 a.m., demanding that her youngest sister accompany her to the gym.

At that time, Olivia dreamed of playing basketball at the next level; Audrey, on the other hand, just wanted to sleep in for a few extra hours. She often tried (unsuccessfully) to resist her sister’s pleadings.

“Do you want be great, Audrey?” Olivia asked, whenever Audrey declined her invitations. “Then you will get up and you will do it.”

Audrey now appreciates Olivia’s efforts to drag her to the gym. Waking up early every day during summer vacation wasn’t always fun, but it prepared her for the grind of varsity basketball.

“(My sisters) have never given up on me,” Audrey said. “Just that routine I got in helped me for years to come when I really did want to focus on basketball.”

Now, it’s Audrey’s turn to play the role of an older sibling, mentoring both sophomore Ashlee Zirkel and freshman Riley Dill. Zirkel remembers experiencing some nerves before an early home game. So before the Lady Antlers ran out of the locker room, Audrey encouraged Zirkel to keep attempting field goals. When Riley became flustered after traveling during Tivy’s 50-27 win over Harlandale last Tuesday, Audrey urged her to flush out the mistake and focus on the upcoming defensive possession.

Under Audrey’s tutelage, both players have blossomed into strong varsity players. As a result, the Lady Antlers have steadily improved throughout the season.

“Her encouragement really means a lot to me,” Zirkel said. “I want to be the same kind of senior to someone else that she’s been to me.”

Olivia always knew Audrey possessed the ability to be a great leader. After all, there was a reason she pushed her youngest sister to go to the gym.

“She does a really good job of setting an example for younger girls and that makes me really proud,” said Olivia, who sends Audrey encouraging texts before every game. “She’s the youngest sibling, but now she is figuring out how to lead and be the player on the team that everyone looks up to. … It’s been a blessing as an older sister to see.

“I wanted her to love the sport. I didn’t want to force her to get up and do it. I think that she has finally got to the point where she truly does love it, and she is just having a great time and playing really well, too.”

Audrey didn’t break away from family tradition. On Nov. 19, 2019, she signed her letter of intent to play at LCU.

Her signing was significant for another reason: Her first college season will overlap with Juliana’s senior year.

Olivia and Juliana played two seasons together at Tivy and then two more at LCU. Audrey, though, has never experienced the luxury of being on the same team as one of her sisters. That will change next fall.

He’s going to miss not having a daughter play at Tivy, but he’s excited to see two of his daughters share the same court in the future.

“Winning the national title was the cherry on top, but getting to watch your kids play at any level is such a special thing,” Clay said. “There’s nothing like watching your kids playing together on the same floor and cheering for each other.”

Audrey, though, isn’t thinking about college just yet. Her family was why she fell in love with basketball, but her senior teammates Way, Becker and Twiss have given her three more reasons to love the sport. She’s been playing with them since seventh grade; She’s hoping to win a few more playoff games with them before she joins Juliana at LCU.

“To be able to play the sport I love with great friends is such a blessing.” Robertson said. “I am trying to soak up every last bit of it.”