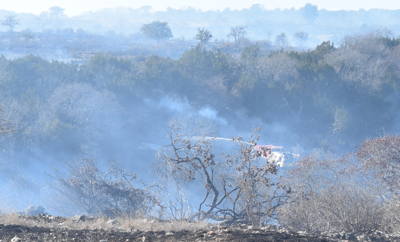 UPDATE: 200 acres may have been affected by the brush fire, indicated a representative of the Turtle Creek Volunteer Fire Department on Thursday evening. The extent of the damage will be clearer after sunrise, the representative indicated. Firefighters were still busy at the scene as of 9 p.m. Thursday.

Firefighters from at least eight departments fought a brush fire on Thursday about 10 miles south of Kerrville.

As of late that afternoon, the fire had been contained, although hot spots were still being put out.

It’s believed the fire was started through artificial means, but details of the investigation into the cause were not immediately available. The blaze burned at least dozens of acres.

The incident commander in charge of coordinating efforts was Wes Gordon, chief of the Turtle Creek VFD.

Dub Thomas, Kerr County emergency management coordinator, also was on scene to provide assistance. The vast majority of the response to the brush fire was mounted by volunteers, he confirmed.

“They do it without being asked,” Thomas said. “It’s a calling for them, it’s all about people and communities working together, solving problems.”

Firefighters from at least eight departments fought a brush fire on Thursday about 10 miles south of Kerrville. The fire was contained that af…

All those who own property in Kerr County — whether permanent homestead, hunting cabin or inherited real estate are reminded they have until t…