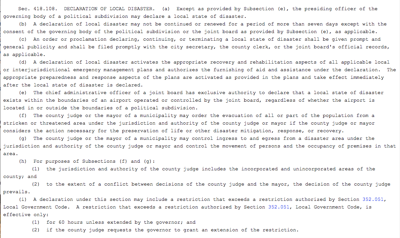 Kerr County Kerr County Judge Rob Kelly has declared a local state of disaster due to the pandemic.

Kelly, during a Tuesday press conference, said there are no positive cases of the coronavirus in Kerr County, but added that eight people are self-quarantined and being monitored by the county and state health department. He stressed that “there is not a health emergency” in Kerr County.

“What we’re doing here today is we’re going to be safe rather than sorry, and that is the real purpose for declaring the disaster today,” Kelly said.

The authority gives Kelly the right to halt work on a TxDOT-licensed project officials were worried might inadvertently sever communication lines during a time when 911 service might be particularly important. A local outbreak of coronavirus may put pressure on the 911 system, first responders and the local hospital, so officials want to be ready. The hospital was in the process of expanding its small ICU from 12 to 14 beds to prepare for a potential outbreak.

Previous TxDOT projects have resulted in accidental breakages of fiber optic cables that knocked out cellphone and 911 service, and even landlines in some cases. News reports indicate these outages occured in 2010, 2015 and 2016, sometimes involving multiple incidents per year.

Precinct 3 Commissioner Jonathan Letz has been appointed to communicate with the contractor and other stakeholders to determine whether such an order might be necessary.

“If they can reach an agreement, we’ll take their recommendations,” Kelly said.

But Kelly added he may take “emergency action to stop that construction until this crisis passes so that no one loses coverage.”

Kelly also said he declared the disaster to allow public access to disaster-related financial relief. It wasn’t immediately clear whether this was necessary, however, because the governor already has declared a state of disaster and applications already were open for the Small Business Disaster Loan program.

The governor already has declared a state of disaster and applications have been open for the Small Business Disaster Loan program here.