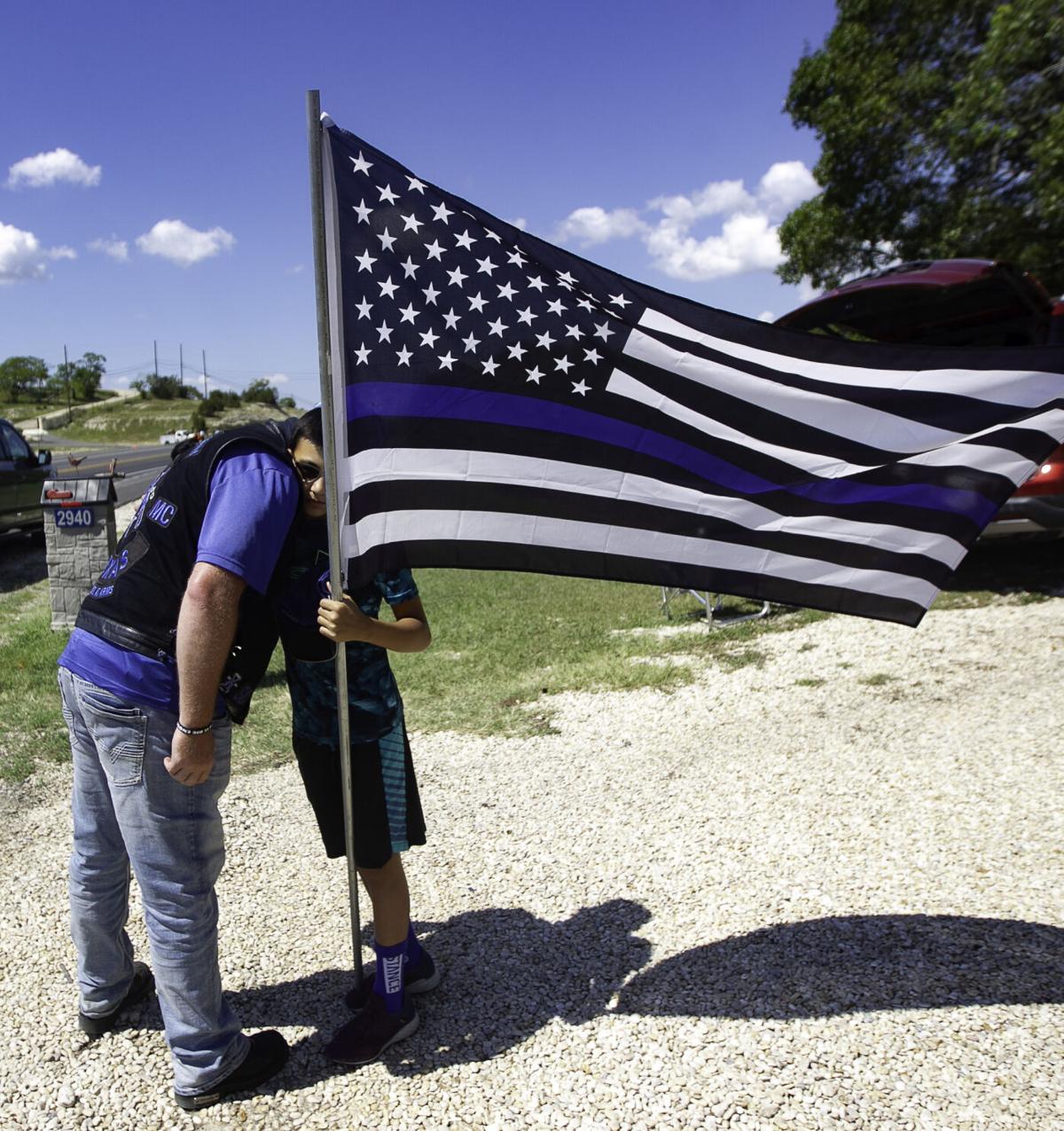 David Guerra, 12, holding the Thin Blue Line flag, is embraced by a member of the Thin Blue Line Motorcycle Club on Sunday. Guerra helped aid the club's riders after they were hit by an alleged drunken driver on July 18. Three men were killed that day, a fourth-rider died last week. 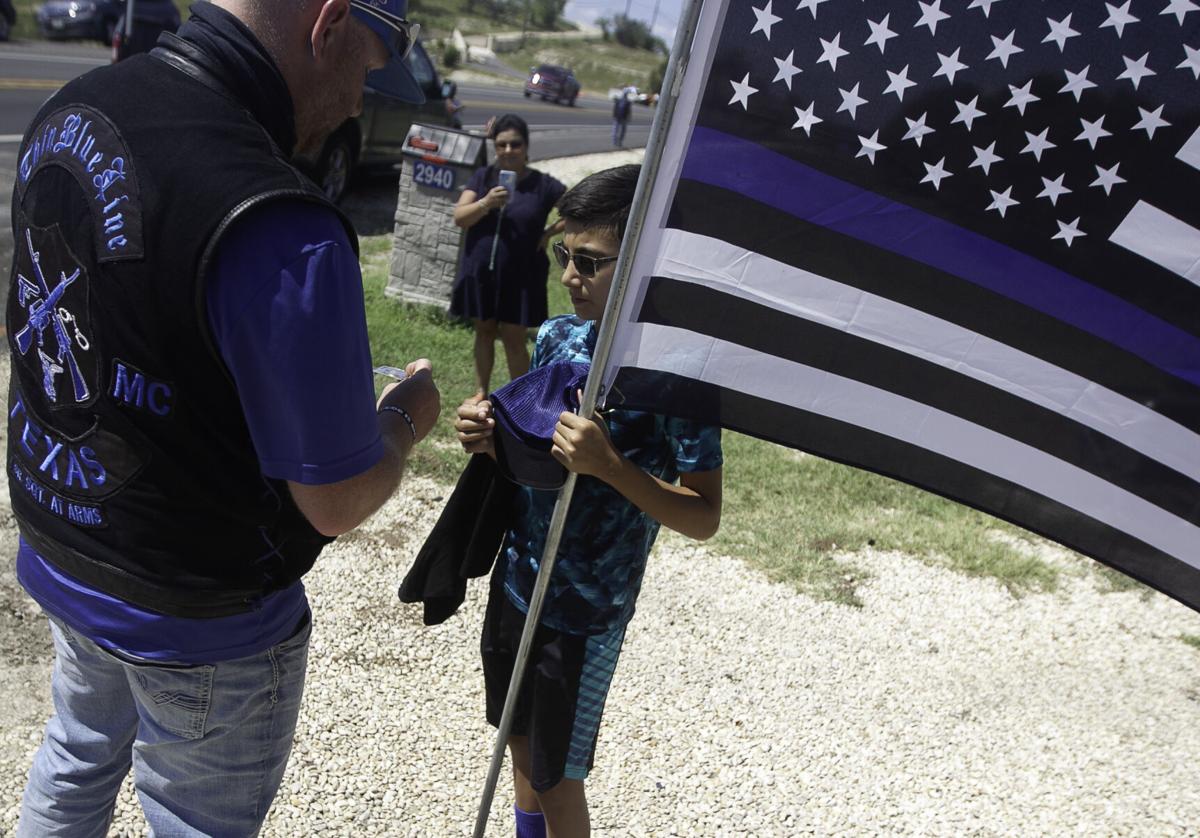 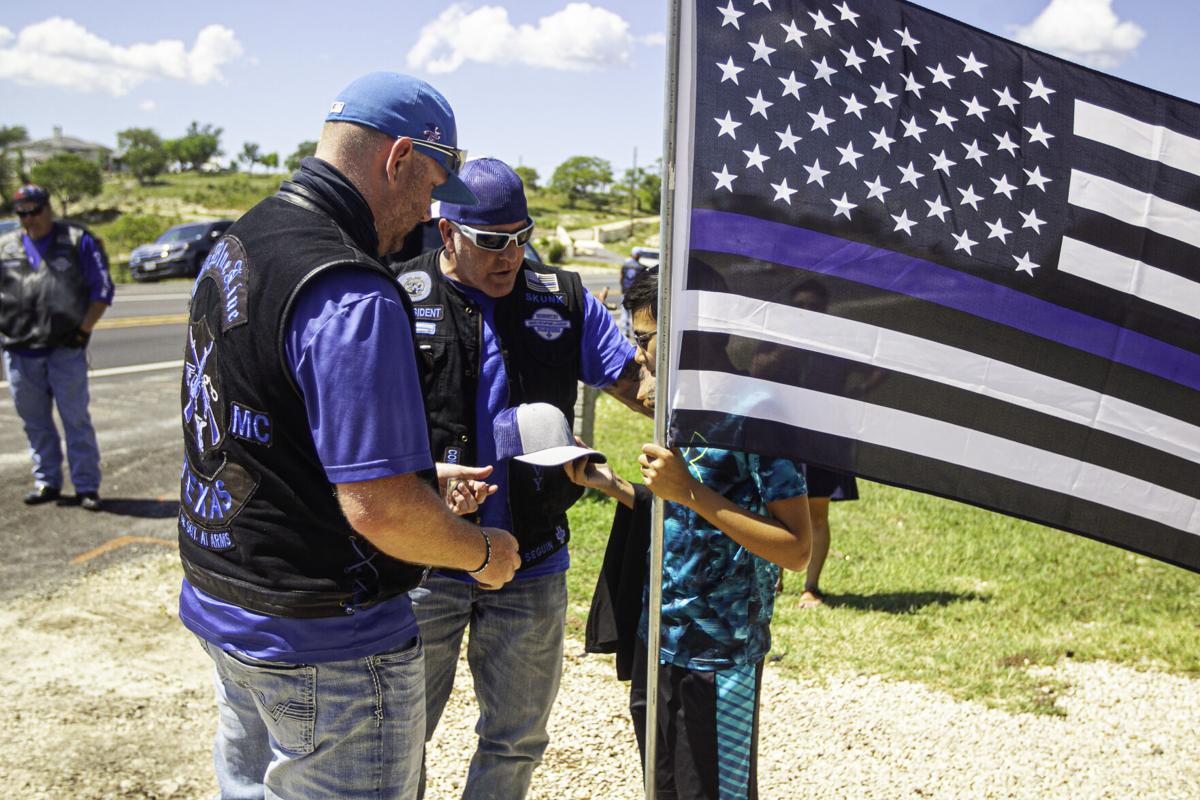 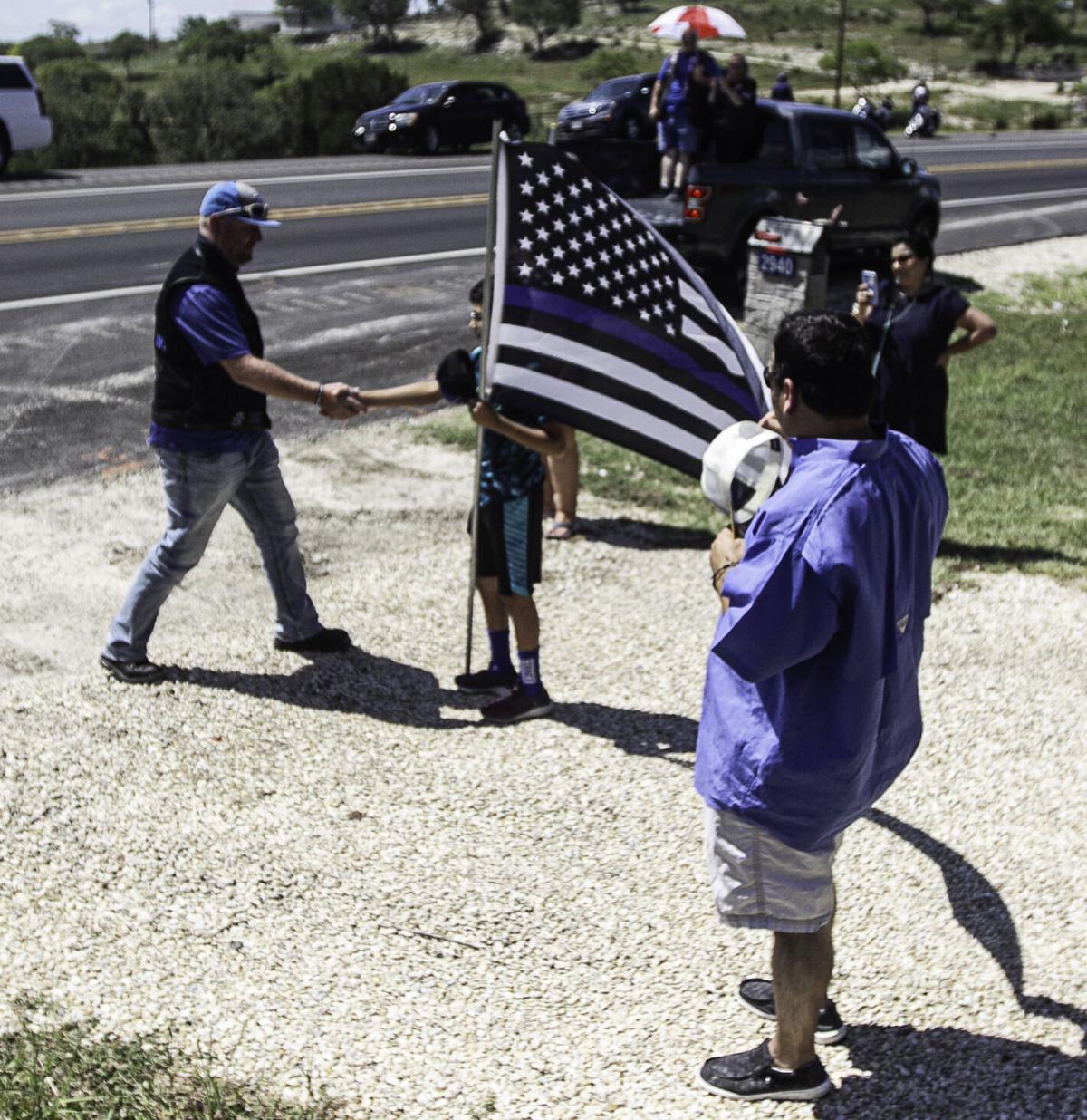 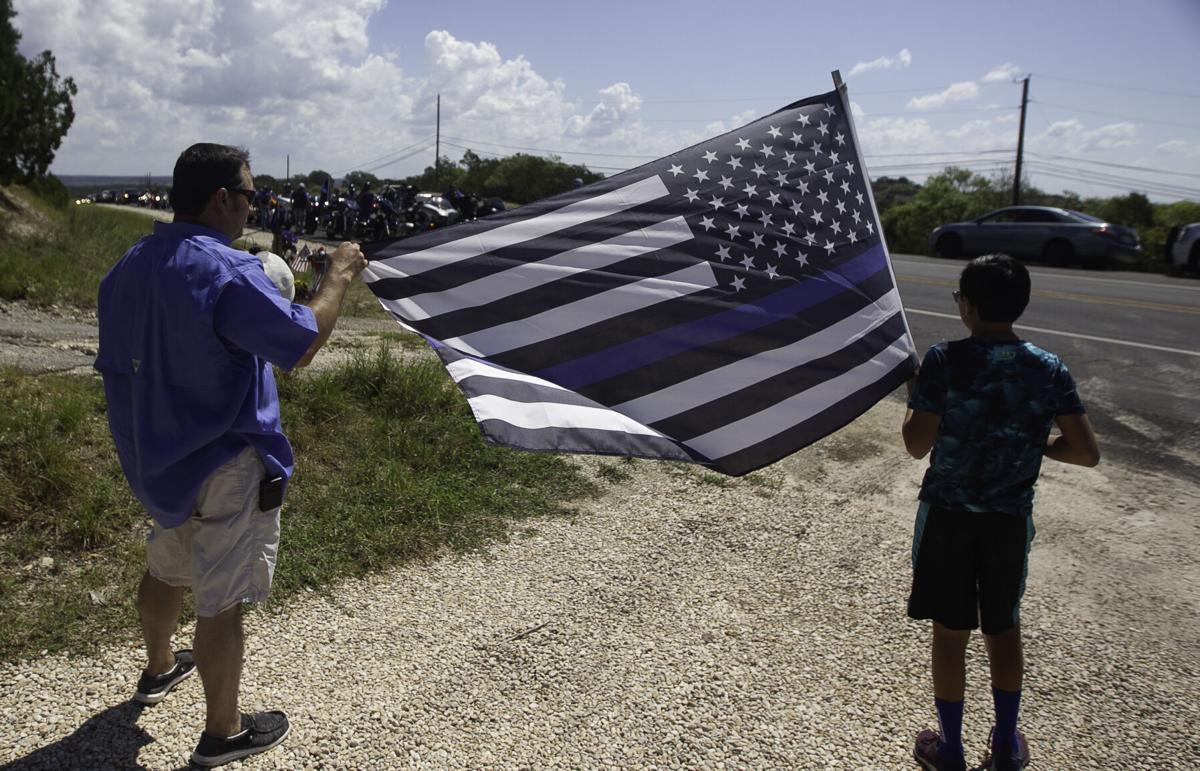 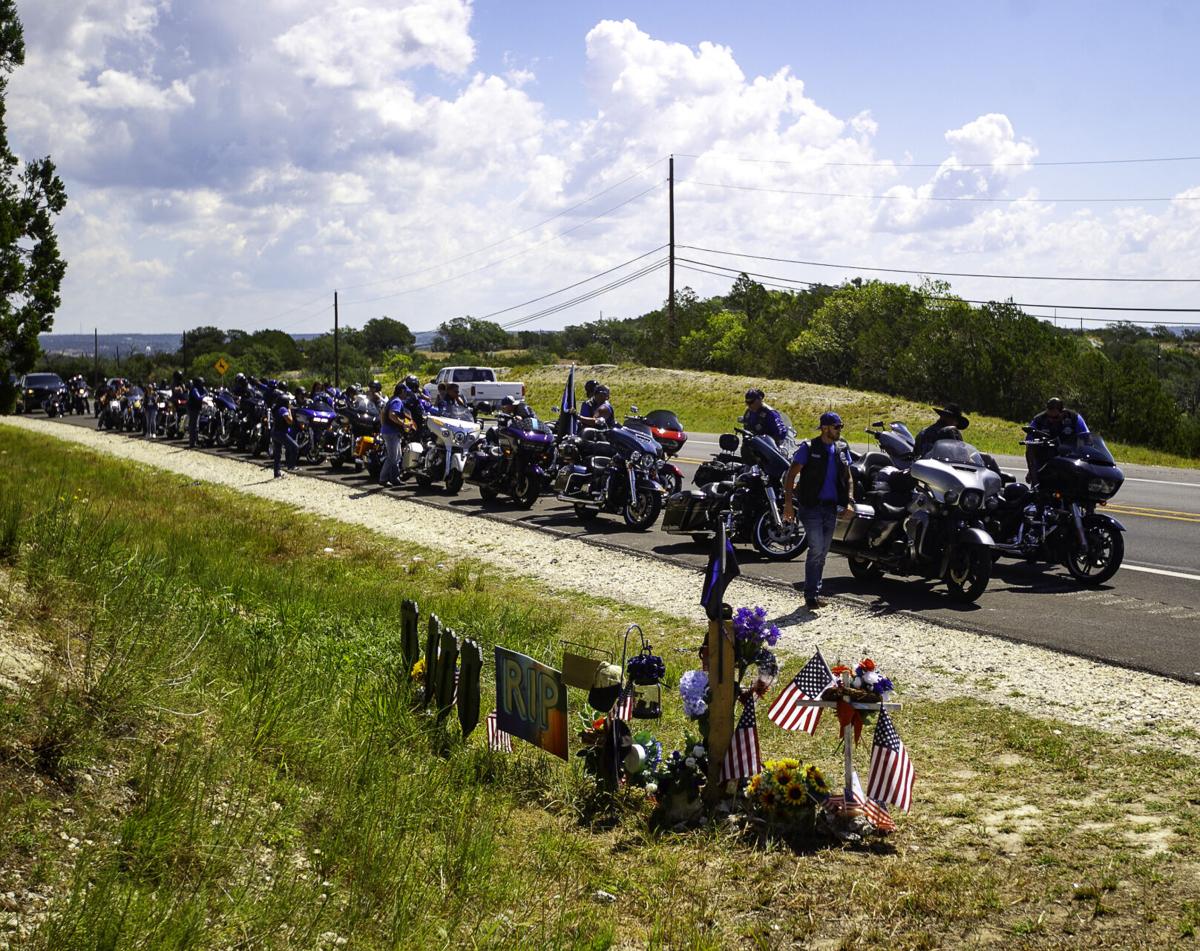 David Guerra, 12, holding the Thin Blue Line flag, is embraced by a member of the Thin Blue Line Motorcycle Club on Sunday. Guerra helped aid the club's riders after they were hit by an alleged drunken driver on July 18. Three men were killed that day, a fourth-rider died last week.

One by one they made their way to the 12-year-old David Guerra who was standing holding a Thin Blue Line flag on the side of Texas 16 on Sunday afternoon just south of the Kerrville city limits.

They walked past the paint marks that outlined the scene of a horrific crash that has changed all of their lives. They headed toward the boy, and the boys’ father, because it was this boy who did so much for them.

They held out a hand, and they almost followed it with a hug because on this day they were not only honoring their friends and colleagues but the efforts of a boy who became a man on July 18 — facing what no child should ever see, but doing it with the courage rarely possessed by even adults.

David Guerra saw what happened on that Saturday afternoon two weeks ago in a blink of an eye — a motorcycle plunging down an embankment. Then it was another. Then smoke, and this boy, who is about to enter the eighth grade at Kerrville’s Hal Peterson Middle School, knew he had to act and act fast. He called for his mom, telling her there was a really bad crash in front of their house and that they needed to call 9-1-1.

David Guerra wasn’t done. He ran out of his house toward the highway, where three men were already dead or dying, and at least two motorcycles were on fire. He grabbed a hose and gave to the men who were in black vests with blue writing — members of the The Thin Blue Line Motorcycle Club.

To the members of The Thin Blue Line, Sunday proved to be a day of remembrance for the four men who lost their lives when an accused drunken driver plowed into them on July 18. It was a day that the Guerra family will never forget.

“I just saw bikes down,” said Ruby Guerra, who made a call to 9-1-1 and told dispatchers the severity of the scene and how many bikes that she could see down.

For five years, the Guerra family knew there could be an accident along Texas 16, but never one to the scale that they witnessed on July 18. The crash claimed the lives of Joseph Paglia and Michael White, who were both from Niles, Illinois. A third man, Jerry Wayne Harbour, was also killed. A fourth rider, Joseph Lazo, also from Niles, died in a San Antonio-area hospital on Thursday after a battle to keep his leg.

David Guerra’s quick thinking was applauded by the more than 200 riders that came out for a memorial ride on Sunday. He was given a T-shirt, hats, a coin but most importantly he was told thank you by one rider after another.

“When I came up to the porch, I saw everything that had happened,” said David Guerra, who was holding the Thin Blue Line Flag with this father, Donnie. “I immediately ran and started to undo the hose and threw it over here to get it, and I turned on the water. I proceeded to get another hose. We also had a wading pool and I went and got buckets of water.”

That quick-thinking helped contain the fire and give some aid to those in need. Eight others were also injured. There were at least 16 motorcycles that were involved in the ride south toward Medina on July 18 when the alleged drunken driver struck them.

Ruby Guerra says they’re doing fine because their family is rooted in faith, but she still asks her son if he has bad feelings about what happened.

David Guerra tells her he’s fine because he did all that he could to help those men that day.

Riders with several motorcycle groups, along with the Texas All-Terrain Club, left Helotes on Sunday morning for a memorial ride that paused b…

Thank you, David Guerra, for wearing your superhero cape and acting quickly that day. Our family lost someone very special to us that day, but heaven gained a few angels and Kerrville gained a hero. Thank you

Do you plan to watch Tuesday's first presidential debate?