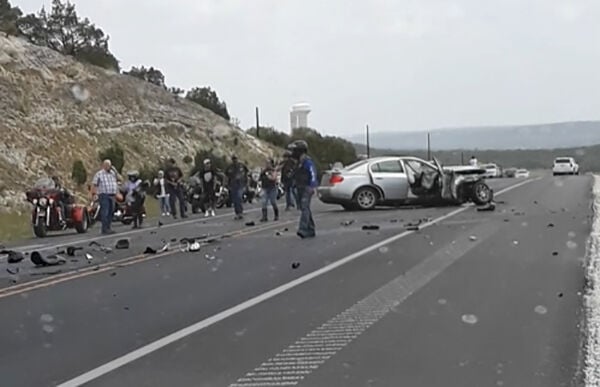 The Texas Department of Public Safety said this car was driven by Ivan Robles-Navejas when it struck a group of motorcycle riders on July 18, 2020. Three members of the club were killed in the crash, while nine others were injured.

Debris is strewn across Texas 16 after a fatal motorcycle crash left three men dead on July 18, 2020. 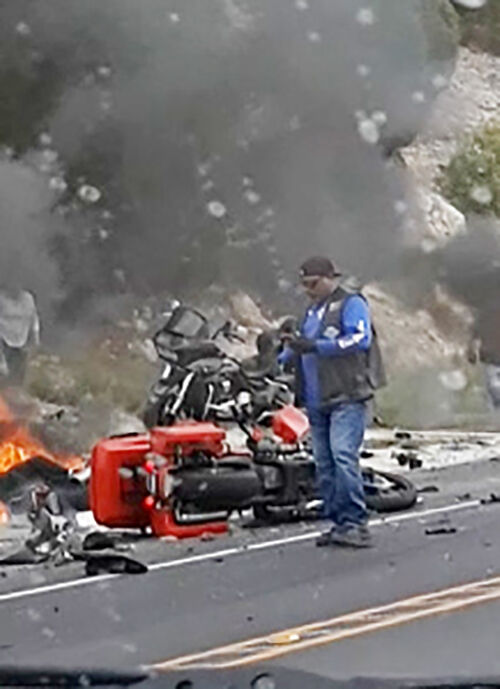 A member of the Thin Blue Line Motorcycle Club stands over the scene of a fatal motorcycle crash involving three members of the club. Two of the motorcycles were on fire.

The Texas Department of Public Safety said this car was driven by Ivan Robles-Navejas when it struck a group of motorcycle riders on July 18, 2020. Three members of the club were killed in the crash, while nine others were injured.

Debris is strewn across Texas 16 after a fatal motorcycle crash left three men dead on July 18, 2020.

A member of the Thin Blue Line Motorcycle Club stands over the scene of a fatal motorcycle crash involving three members of the club. Two of the motorcycles were on fire.

Bill and Yolanda Carson were headed into Kerrville on Saturday afternoon to run some errands, but they will never forget what they saw as they made their way north on Texas 16.

From the moment they turned left onto the highway from Sparkman Road, near their home, they could see downed motorcycles, heavy black smoke and utter chaos. What the Carsons saw was the aftermath of a horrific crash that killed three motorcycle riders and left nine others injured, including three critically. Department of Public Safety troopers say the wreck was caused by a drunken driver.

The Carsons pulled to the side of the road, and Yolanda began recording video of the scene in what she described as a way to preserve evidence of what had happened. The video shows a scene of devastation with three men lying on or just off the roadway. A woman was covering one who was already dead.

The Kerrville Daily Times has chosen not to show the full video, because of the sensitivity of the content, but has provided two stills from the video of the suspect’s car and the wreckage of some of the motorcycles, which were on fire in the front driveways of two homes along Texas 16.

“Look at the car,” Bill tells his wife during the video. About 100 yards ahead of them is a silver sedan that has massive front-end damage. Investigators said Navejas crossed the center line and hit the group of 16 riders head-on. The riders, who were part of the Thin Blue Line Motorcycle Club, were part of a larger group that was meeting in Medina. The riders had enjoyed lunch in Kerrville before heading south. Investigators said Navejas was heading north on Texas 16 into Kerrville when the crash happened.

During the video, the couple becomes alarmed by what they thought was a slow response to the severity of the accident. Although they knew 9-1-1 had called, Yolanda ends the video to make another call to 9-1-1.

“I said they needed to bring more ambulances and a fire truck,” Yolanda Carson said.

In the video, there are two motorcycles on fire, and members of the club are working to help those who were injured. The scene stretches approximately 100 yards behind the couple, looking south down Texas 16. Another person is kneeling next to two men lying just to the side of the roadway. Members of the club, many of them former law enforcement officers, took control of the scene right away.

The video is shot too far away to see what happened to the Robles-Navejas, but it’s clear that he’s not in the car after enlarging the video.

The couple said on Tuesday that they can’t stop thinking about the crash and the men on the side of the road.

“That’s not the kind of thing that is going to leave you for a long time,” said Bill Carson, who once survived his own motorcycle crash.

Bill Carson said the couple spent more than 20 minutes at the scene before they were told they could leave as police and emergency services arrived.

“There were just people everywhere on the ground,” Bill Carson said with a shake of his head.

Robles-Navejas was in the Kerr County jail as of July 20 on bonds totaling $500,000, according to jail records. But even if he could make bail, Robles-Navejas wouldn't be released without the approval of the U.S. Department of Homeland Security, because an immigration hold was placed on his file.

According to the Kerr County Sheriff’s Office, the 28-year-old man told jail staff he was born in Mexico, arrived in the U.S. when he was 3 months old, obtained a resident alien green card when he was 24 years old, and was prevented by the pandemic from renewing the card after it expired in January 2020.

Saturday wasn’t the first time Robles-Navejas was accused of DWI; he was arrested in 2016 on suspicion of misdemeanor DWI. It appears prosecutors opted not to file a charge, however.

Robles-Navejas pleaded guilty to misdemeanor resisting arrest, search or transport in 2015 in relation to an incident that occurred in 2013, according to Bexar County records.

Robles-Navejas was arrested in 2018 on a warrant out of Bexar County on a felony charge of aggravated assault with a deadly weapon — a charge that was pending trial as of July 20. He is alleged to have committed this crime on Nov. 17, 2018. A trial date had been set for June 12 but was delayed for unknown reasons.

According to the Kerr County Sheriff’s Office, when Robles-Navejas was fingerprinted during the booking process at the jail on Saturday, an automated computer system transmitted his information to DPS, which shared information with federal agencies. The U.S. Department of Homeland Security was notified of Robles-Navejas’s arrest and issued an immigration detainer.

Robles-Navejas is a REPEAT public offender. His cake-walk needs to be over. He needs life in prison. If he gets deported to Mexico, he will bounce back to the USA and continue to offend and kill people, and continue to fall through the cracks of the justice system. The DA needs to see that he never harms anyone again, for the sake of the community.