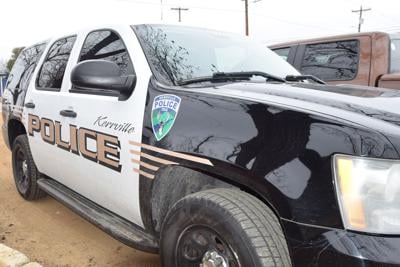 A 47-year-old San Antonio man was arrested on suspicion of driving while intoxicated after a slow-speed pursuit through a store parking lot.

It all started about 7 p.m. Nov. 16 when KPD officers were dispatched to Lowe’s Home Improvement for a possible drunk driver.

“The caller reported to KPD dispatch that the suspected intoxicated driver drove over a ledge,” said Sgt. Jonathan Lamb, KPD spokesman, in a Nov. 20 email. “Upon arrival, an officer located the suspected vehicle and pulled behind it and activated his emergency lights and sirens in an attempt to conduct a traffic stop on the vehicle, which was driving slowly through the parking lot. The vehicle did not stop and continued slowly through the parking lot.”

Officers continued to follow through the parking lot at about 12 to 15 MPH with officers driving behind him with their emergency lights and sirens, as well as announcing on a PA that they are the police and he needed to stop the vehicle, Lamb said. Other officers set up spikes at the exit of the parking lot leading to Loop 534 in order to prevent the driver from leaving the parking lot and further endangering the public, Lamb added.

“After approximately 3,971 feet and 5 minutes, the suspect came to a stop behind the Lowe's building and was detained,” Lamb said.

The driver, reportedly identified as John Wayne Coffee, displayed signs of intoxication and failed a field sobriety test, then agreed to provide a specimen of his breath at the Kerr County jail, Lamb said.

Another person recently arrested on suspicion of DWI is Brady Don Nelson, jailed Nov. 19 by a KPD officer. Nelson also was accused of possessing less than 2 ounces of marijuana, and was released the same day on a promise to pay $2,000 if he doesn’t show up for court.

Would you take the COVID-19 vaccine if it was available?

Later this month, the FDA will consider approval of two vaccines made by Pfizer and Moderna. Current estimates project that no more than 20 million doses of each vaccine will be available by the end of 2020. Each product requires two doses. Would you take this vaccine if it were available to you?