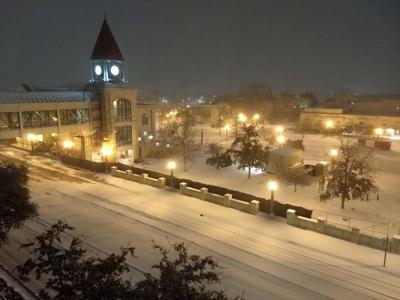 The brutal winter storm that ripped through Texas last week laid low most of the state’s power grid, rendering basic everyday essential services useless. Across the state, millions of citizens shivered in dark, freezing cold homes, often without food and even more perilously without water. Those dire circumstances produced a potential health crisis of epic proportions – a crisis that demanded an equally epic response from local agencies, businesses and citizens alike.

It was a challenge Kerrville rose to with outstanding resolve. If ever there was a doubt about Kerrville Kindness, our citizens, business owners, emergency responders and city workers put it to rest last week.

Kerrville Fire Chief Eric Maloney and Kerrville Police Chief Chris McCall combined forces to respond to emergency calls, citizens in distress, and other local weather-related issues. Between Feb. 12-19, as the storm raged across Kerrville, the KFD and KPD answered thousands of calls, with many involving stranded motorists or transfers of citizens to emergency shelters set up to provide relief for those without power. City personnel also coordinated and mobilized massive efforts to transport clean water to areas of the city hardest hit by the storm-induced water shortage.

The city’s emergency shelters, located at Calvary Temple Church and First United Methodist Church, and the Salvation Army were manned by dedicated volunteers who braved horrific weather, icy roads and other hazardous conditions to minister to others without concern for their own safety or health. Their devotion to serving their fellow citizens represented the finest example of care and compassion.

No less noble were the efforts of Kerrville Public Utility Board linemen, who spent countless hours trying to restore power to the Kerrville area, all the while being hampered by ERCOT-mandated rolling power outages that made it virtually impossible to track down where local power failures were occurring. Many of these individuals left their own families at home in the same conditions most of us faced to venture out into sub-freezing temperatures and biting winds as they sought to restore comfort for the rest of us.

Likewise, City of Kerrville Public Works employees battled 24/7 against overwhelming winter conditions to keep roads open and as safe as possible, and the city’s water department staff labored around the clock to restore water to area homes despite numerous line breaks and power outage issues. Once water was restored, they continued working through the weekend to lift a TCEQ-mandated water boil notice issued during the storm’s height.

And many thanks must be given to area businesses who chipped in wherever needed to help alleviate local suffering. The boiled water operations at Pint & Plow Brewing Company and Basement Brewers of Texas helped supply desperately needed clean water to many citizens, while other businesses contributed food to local shelters as well as emergency responders and street crews. Our local H-E-B and Walmart were, as always, at the forefront in doing all they could to keep operating and providing emergency provisions.

However, the biggest thank you’s go to our citizens, who persevered through this crisis with patience and concern for others. We have heard countless stories of neighbors helping neighbors, checking on neighbors, offering up food and shelter to neighbors who had none. We have read numerous Facebook posts of food runs over icy streets to deliver much-needed meals or supplies to total strangers – acts of humanity that show Kerrville Kindness is so much more than just a slogan.

Last week was one of the toughest Kerrville has endured for quite some time, and the residual effects of it will continue for some time into the future. But we have already demonstrated that in times of crisis we all pull together, and I have no doubt that our community spirit and faith will lead us going forward.

After the severe winter storm knocked out potable water distribution for the city of Kerrville, first responders asked their friends at Baseme…

I wanted to make sure to give kudos to Kerrville's Home Depot for staying open when Lowes, HEB and virtually every other business was closed! ....even when they were out of power, their generators were up and running their registers.