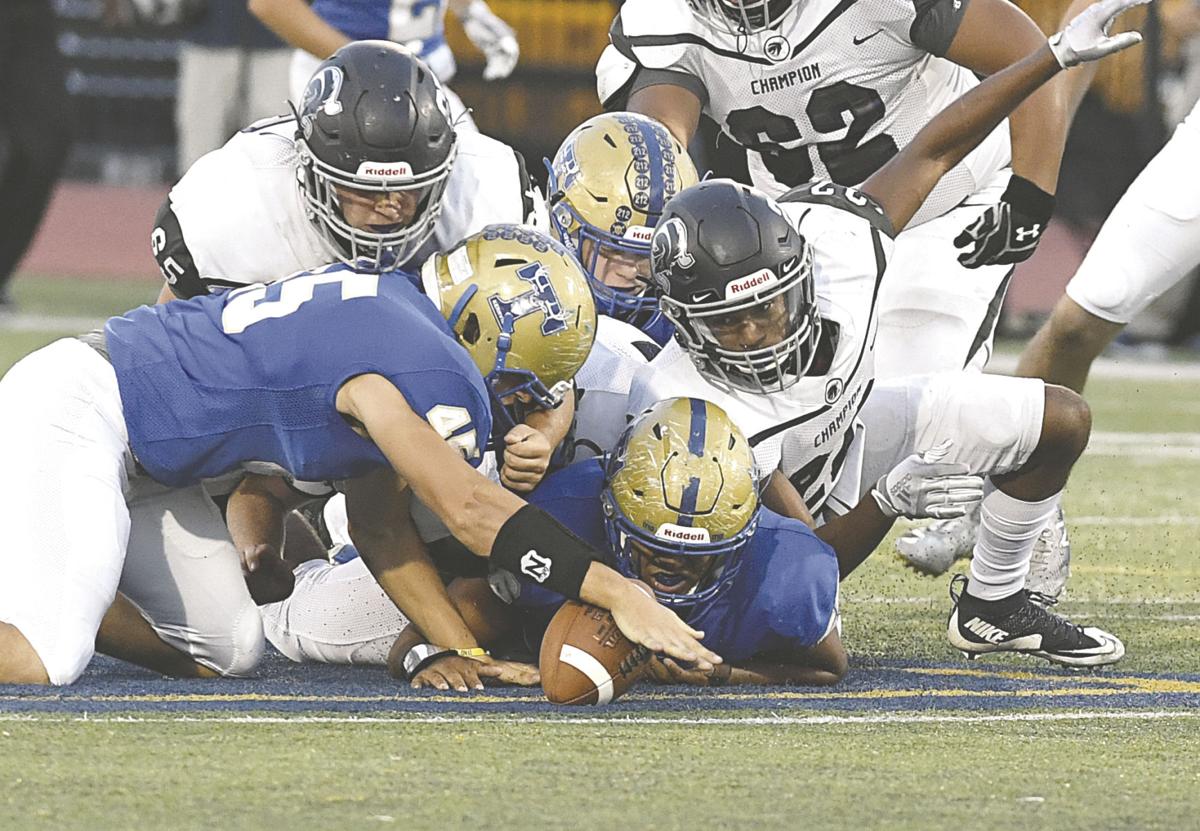 Tivy's Garrett Kleypas, 45, jumps on a fumble to get the ball back for Tivy Friday against Champion. 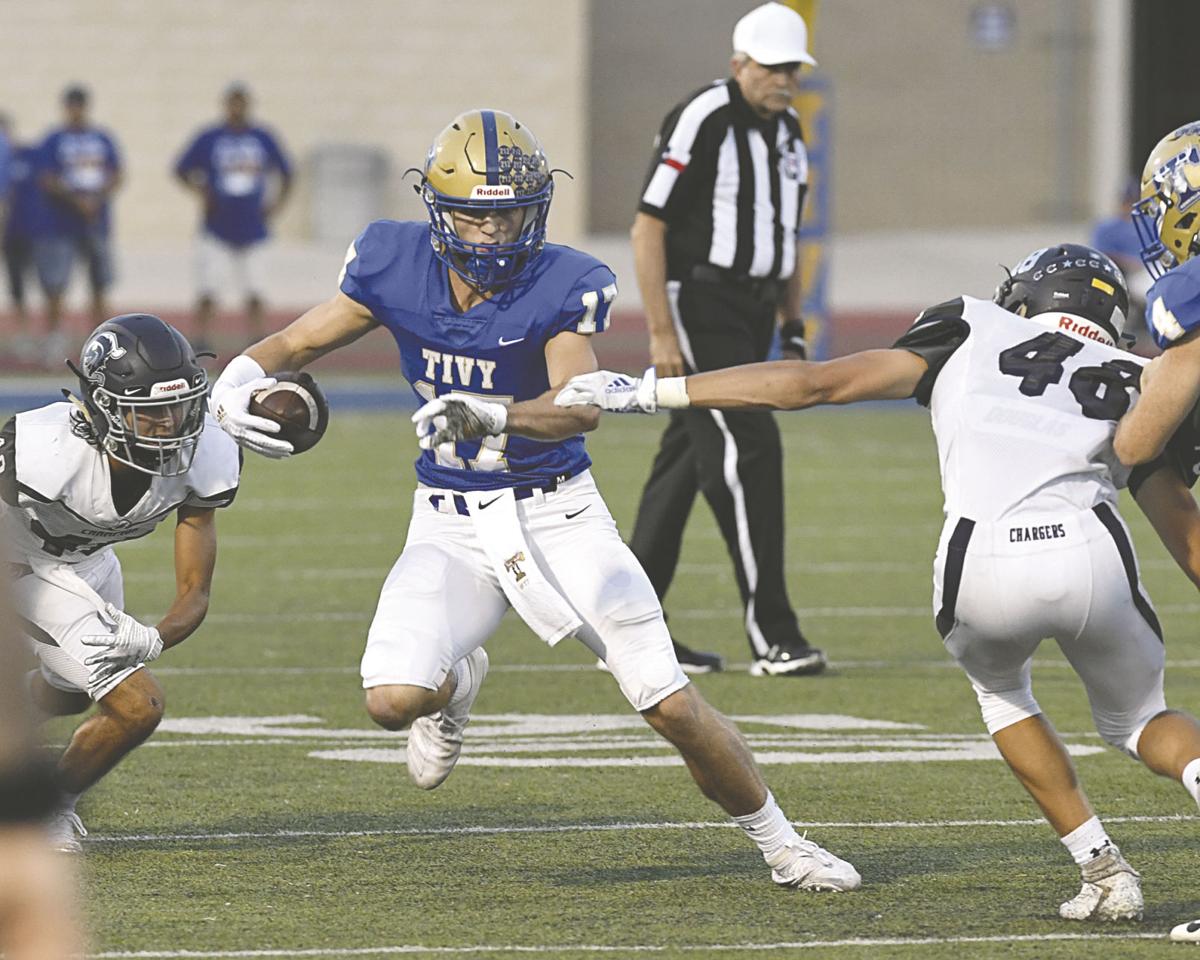 Tivy receiver Brooks McCoy, 17, makes a catch and scramble for a first down Friday against I10 rival Champion. 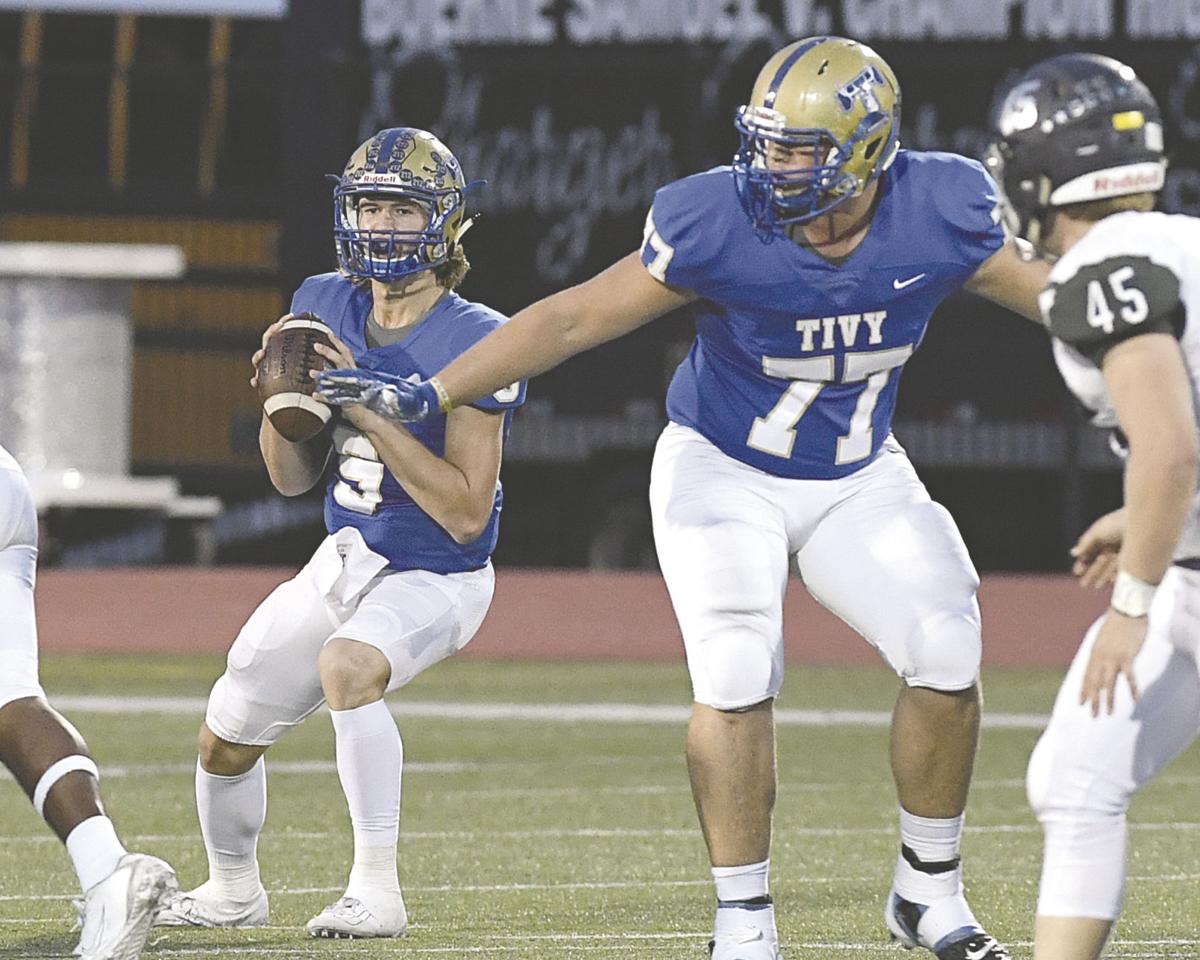 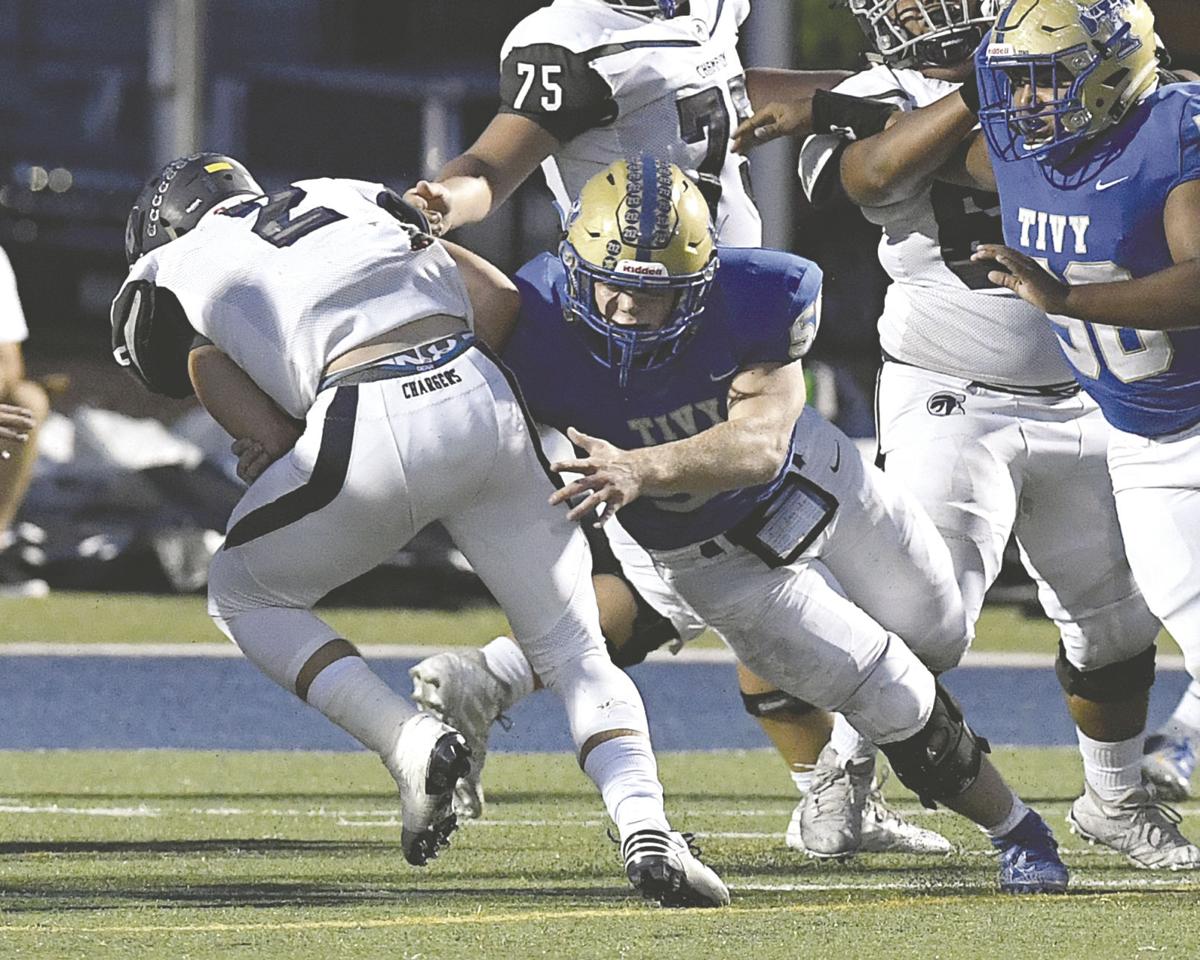 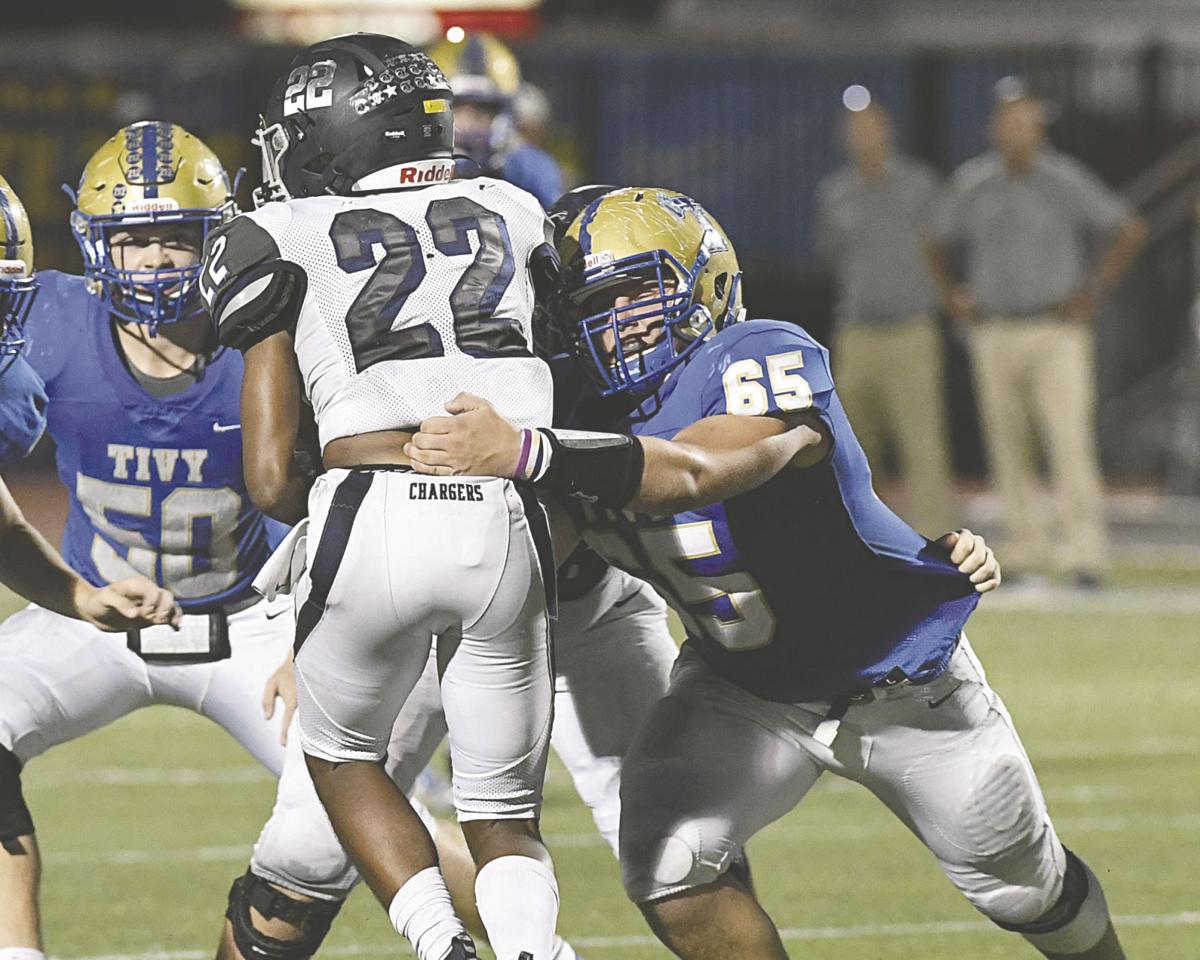 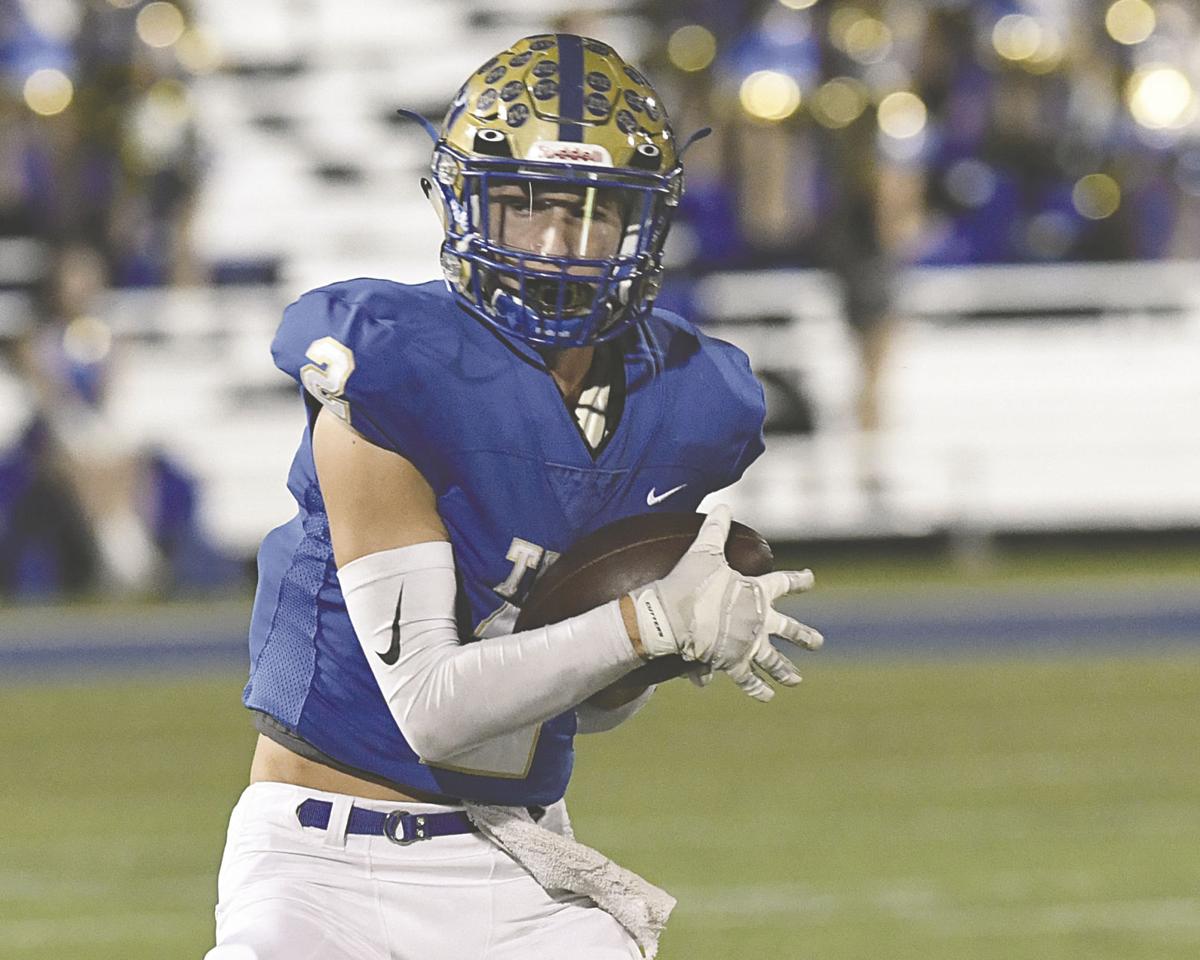 Tivy receiver Stoney Rhodes, 2, catches a pass for a first down Friday against Boerne Champion. 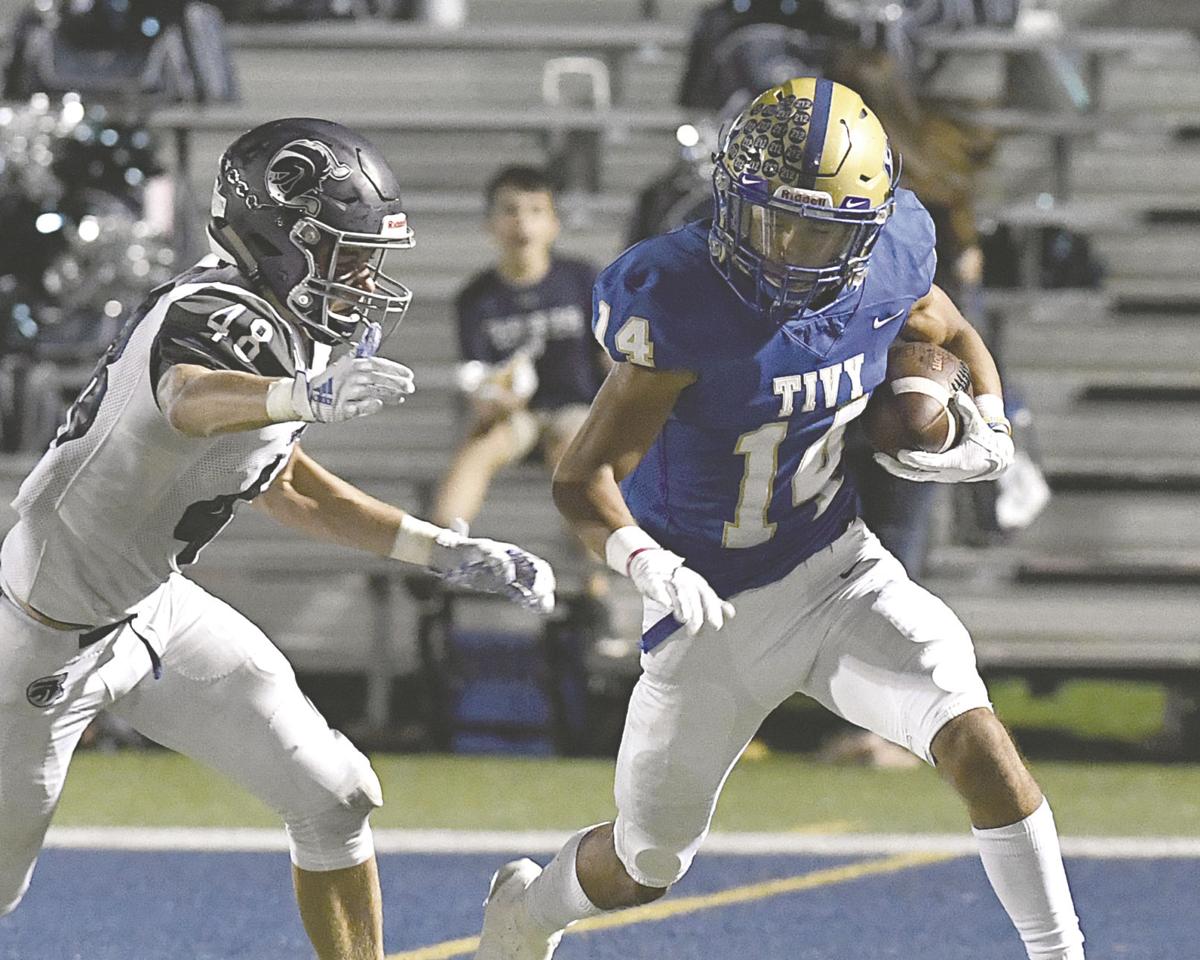 Frank Molina, 14, for the Tivy Antlers, catches a pass for a short gain against Boerne Champion. 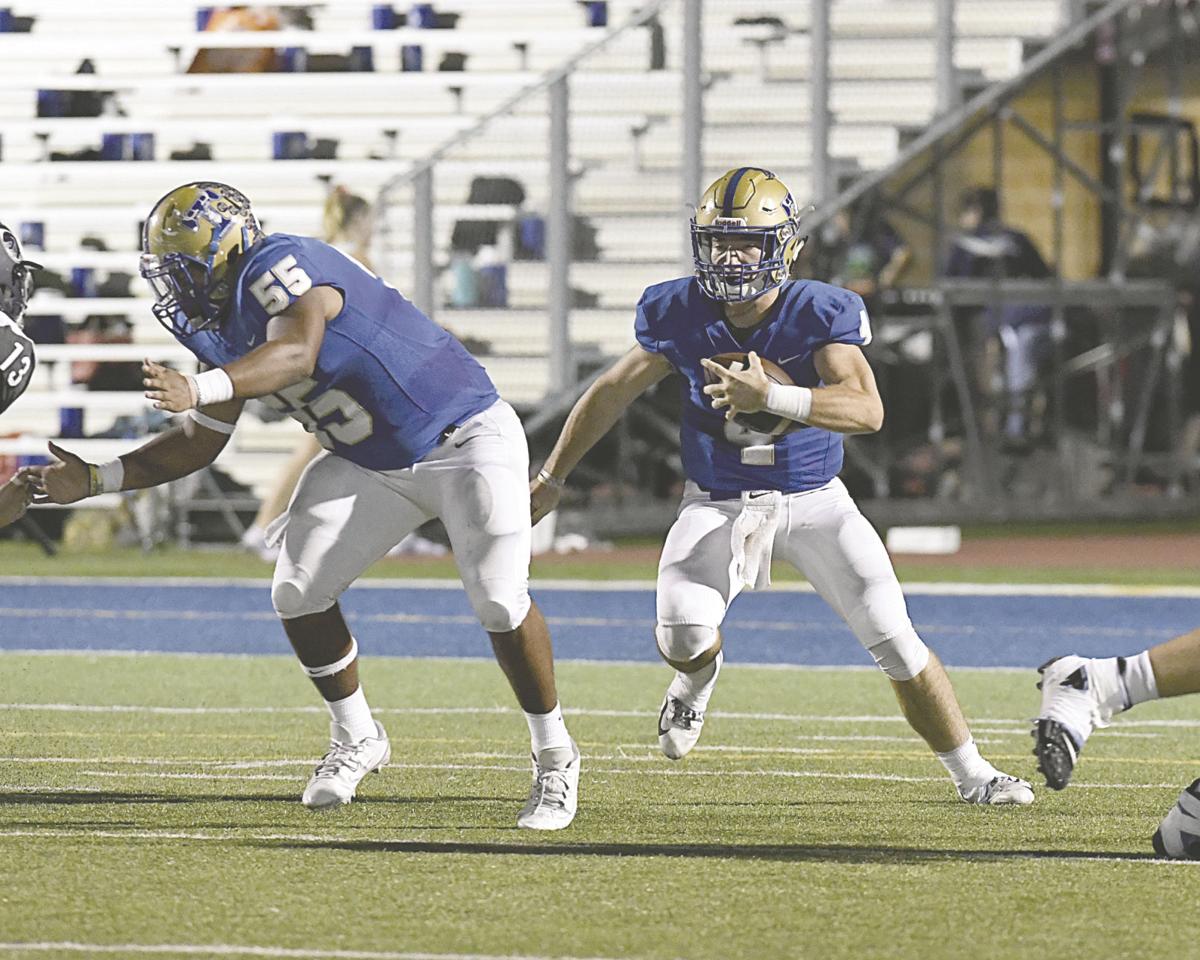 Quarterback Cole Miears, 4, runs through a hole opened up by lineman Aaron Ortega, 55, during the Antlers home game against Boerne Champion.

Tivy's Garrett Kleypas, 45, jumps on a fumble to get the ball back for Tivy Friday against Champion.

Tivy receiver Brooks McCoy, 17, makes a catch and scramble for a first down Friday against I10 rival Champion.

Tivy receiver Stoney Rhodes, 2, catches a pass for a first down Friday against Boerne Champion.

Frank Molina, 14, for the Tivy Antlers, catches a pass for a short gain against Boerne Champion.

Quarterback Cole Miears, 4, runs through a hole opened up by lineman Aaron Ortega, 55, during the Antlers home game against Boerne Champion.

Hayden Poe can’t really remember what was racing through his mind as he chased after Luke Boyers. The Tivy defensive end just knew he had to find some way to bring Boerne Champion’s quarterback to the ground.

In the first half, Poe had whiffed on a sack. Moments later, he promised fellow defensive end Gonzalo Hernandez that he wasn’t going to miss another sack in the game. Late in the fourth quarter, with the Chargers threatening to score the game-winning touchdown, Poe had a chance to deliver on his promise.

And, did he ever.

Senior defensive tackle Dominic Jefferson slowed Boyers just enough for Poe to slam the elusive quarterback on the turf for a 13-yard loss. Poe’s sack turned out to be the play of the game, helping the Antlers churn out a 24-19 victory over the Chargers Friday night at Antler Stadium.

His second-career sack brought the ball back to the Champion 49-yard line, making it 2nd-and-23. The Antlers forced three straight incompletions to give the ball back to Tivy’s offense with 1:45 left. The Chargers received the ball again at their 39-yard line with 14 seconds to go, but once again, Tivy’s defense stopped their last attempt to reach the end zone to seal the Antlers’ (3-1, 1-0 District 14-5A Div. II) third straight win over the Chargers in both teams’ district opener.

“To get that sack was one of the best feelings in the world,” Poe said. “I am so proud of our defense. That’s the definition of 212-effort right there. That fourth down stop, that’s great right there.”

Poe, though, wasn’t the only defensive hero on Friday night. Champion’s offense entered this game averaging 46.3 points per game. The Antlers held Champion (3-1) to their lowest scoring output this season. Sure, the Chargers amassed 402 yards. Sure, their running back Tamari Jenkins had 200 rushing yards, charging through the A-gap for a 59-yard touchdown to give Champion the lead in the fourth quarter.

When the Antlers needed a stop, their defense always delivered, giving senior quarterback Cole Miears an opportunity to author another fourth-quarter comeback.

That’s exactly what Miears did, tossing the game-winning 15-yard touchdown pass to Fisher Middleton with 8:12 in the fourth quarter.

“We have very determined kids,” Tivy coach David Jones said. “We have hard, tough kids who refuse to give up. They do a great job. … It was a great wins. Our kids fought their tails off. It was unbelievable. Unbelievable.”

Tivy’s defense gave great effort from the first whiste, with defensive end Garrett Kleypas pouncing on a bobbled Champion snap on the first drive of the game. Six plays later, Quarter back Trapper Pannell (11 of 17 for 77 yards) uncorked a 15-yard pass to Brooks McCoy (seven receptions for 72 yards) to give Tivy a 7-0 lead.

The Antlers’ defense continued delivering big moments in the first half. Trailing 14-6 late in the second quarter, Champion was charging toward Tivy’s end zone, enjoying first-and-goal at the 3-yard line. Tivy, however, prevented Champion from reaching the end zone on four straight plays to earn a loud ovation from the Tivy faithful.

Tivy’s offense capitalized on the goal-line stand, driving 78 yards to give Jared Zirkel a chance to nail a 37-yard field goal as time expired, giving the Antlers a 17-6 lead at the half.

But with Pannell nursing a AC sprain, the Antlers’ offense sputtered in the third quarter, allowing Champion to mount a rally. Boyers sliced the deficit to 17-13 with a six-yard touchdown run; Jenkins gave Champion its first lead of the game early in the fourth.

The Antlers faced fourth-and-one at their own 34 on their next possession. They decided to call a timeout to discuss the play call.

Fortunately for them, they had Miears, who has orchestrated so many fourth-quarter rallies in his Tivy career. There was last year’s win over Champion; then there was the three-overtime victory against Alamo Heights and the time he helped the Antlers overcome a 21-point, fourth-quarter deficit in their 63-62 double-overtime win over Bastrop.

On Friday, he penned another chapter in the entry.

“I guess I save my best football for the fourth quarter,” Miears said. “I wish I could play like that the whole game.”

After his touchdown, it was the Antlers’ defenders to earn just a few more stops. Once again, they delivered.

“Three years we have come out on top,” senior safety Race Risinger said. “That’s how I am going to end my senior year.”