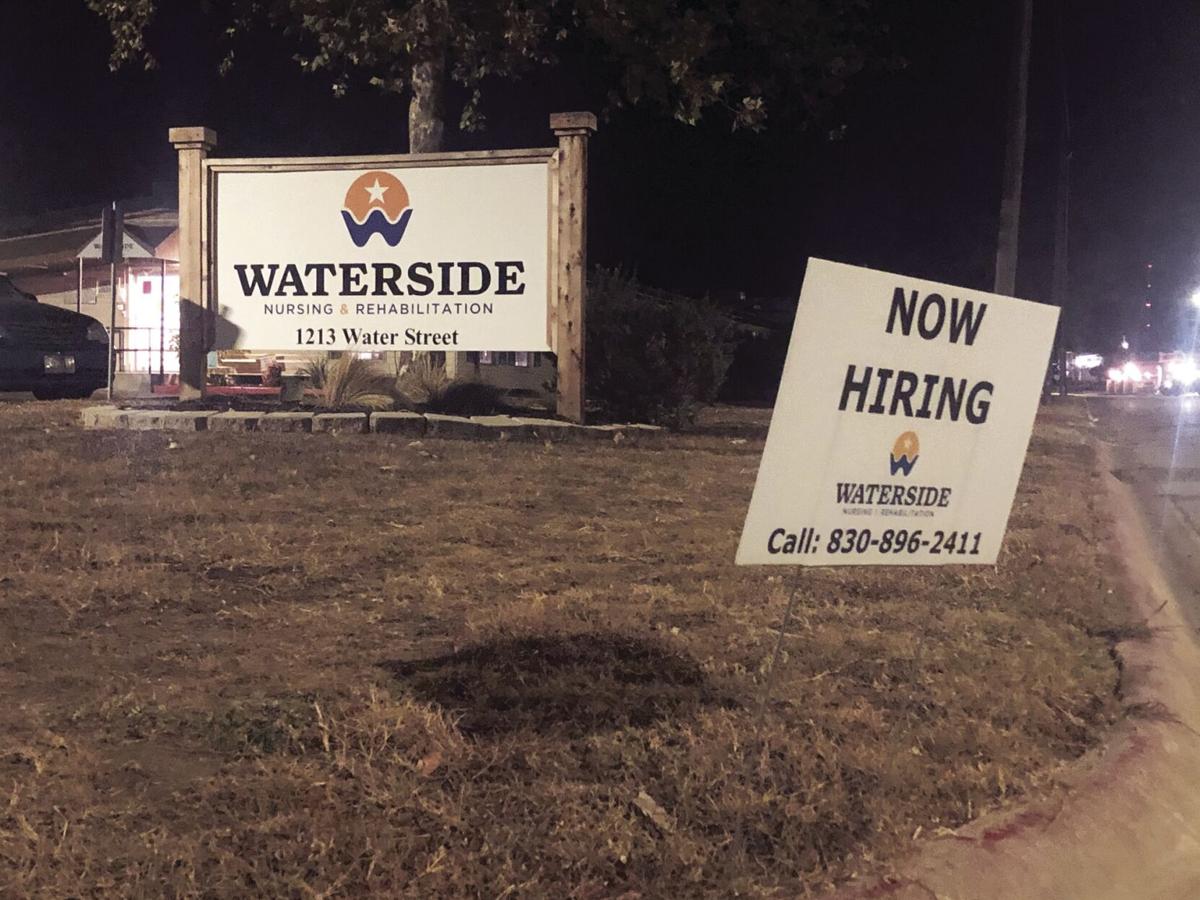 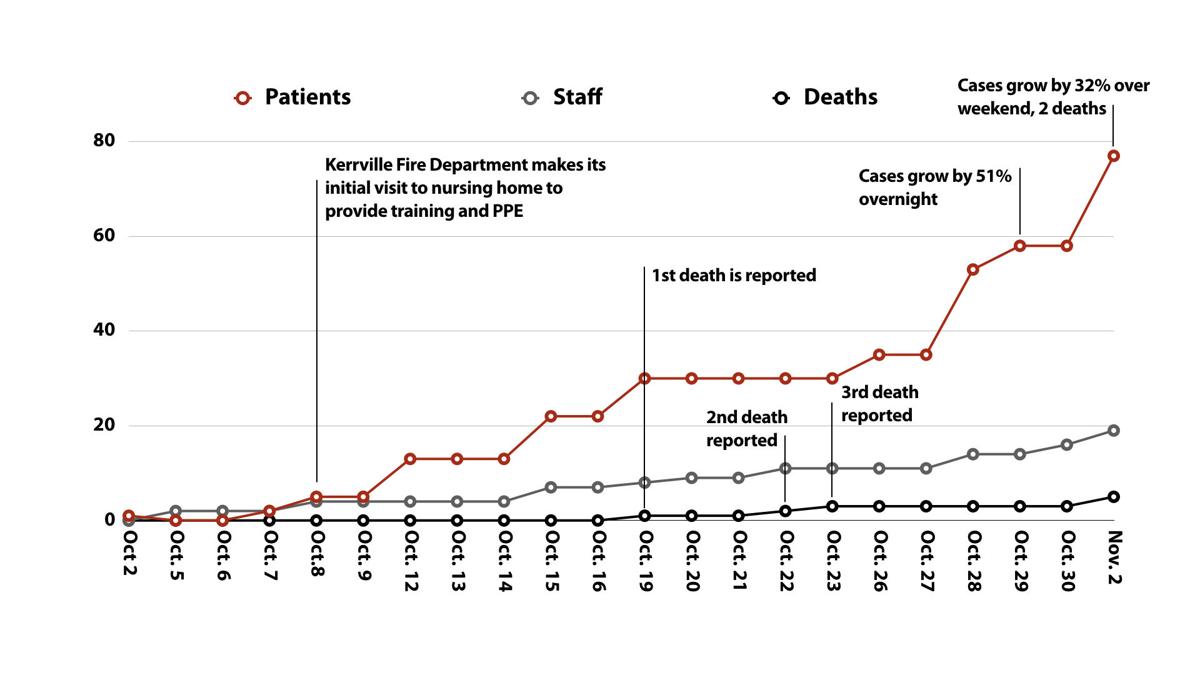 This graphic tracks Waterside Nursing and Rehabilitation’s COVID-19 outbreak from Oct. 2 through Nov. 2. The graphic counts the total number of cases. Before Oct. 2, there had been two previous cases of coronavirus among staff members. Source: Texas Health and Human Services Commission.

This graphic tracks Waterside Nursing and Rehabilitation’s COVID-19 outbreak from Oct. 2 through Nov. 2. The graphic counts the total number of cases. Before Oct. 2, there had been two previous cases of coronavirus among staff members. Source: Texas Health and Human Services Commission.

For weeks, the staff at Waterside Nursing and Rehabilitation has battled an outbreak of coronavirus so severe that, by Nov. 2, more than three quarters of the 100 patients had contracted the virus, but at least one nurse said those numbers have increased.

On Monday, the Texas Health and Human Services Commission declined to confirm real-time numbers of how many patients were infected or had died with COVID-19 at the Water Street facility, but they did release its report that showed that 77 of the facility’s 100 patients had the virus and five people had died as of Nov. 2.

The staff has also been hit hard by the virus. According to the data, 21 staff members have been infected. Through Nov. 2, COVID-19 had infected 98 people at the facility — patients and staff.

While a veteran nurse who works at the facility provided The Times specifics about the number of patients infected and who have died, the Health and Human Services Commission sent an email saying they couldn’t confirm those numbers or provide information on current cases until it had gone through a quality assurance protocol, which takes two weeks to complete.

“Case counts posted reflect data two weeks prior to the date of posting to allow time for a review of the data so that clerical and reporting errors can be corrected,” wrote Elliott Sprehe, a press officer with the Health and Human Services Commission. “The data are provisional and subject to change.”

The nurse, who has been granted anonymity, contacted The Kerrville Daily Times in October after the first reports of the virus started to come out. At the time, she was saying the virus was doing far greater harm than what the state was incrementally reporting, and those numbers have proven to be correct.

By Nov. 2, Waterside had 48 active cases among patients and nine among staff. At the time, it was one of the worst outbreaks in the state. With a 77% infection rate, it’s unclear how it ranks at a state level.

Sprehe said Waterside has been under investigation since the start of the outbreak in early October. There was an earlier investigation into the facility, which is owned by Fort Worth-based Trinity Healthcare LLC.

“HHSC investigators have been investigating this facility and actively monitoring it for compliance and will continue until our investigation is complete,” Sprehe wrote. “You can request the final investigation report through the open records process upon completion.”

Trinity officials have previously declined to comment on specifics and have referred to an email that says they are working with the state to get through the outbreak.

“Leadership is working closely with local and state health officials to ensure we are taking the appropriate steps at this time,” said the company, which has had more than 50 COVID-19 deaths at its facilities around Texas.

Kerrville Fire Chief Eric Maloney said that his department became involved in providing additional PPE and training for Waterside on Oct. 8, but the virus appeared to be well rooted in the facility by that time. Peterson Health, which also provided PPE, and state regulators were also involved in the response.

“Licensed nursing facilities are required to notify HHSC of a serious incident, such as a positive COVID-19 test for a resident or staff member, triggering an immediate investigation into the facility’s compliance with all relevant health and safety rules,” Sprehe wrote. “Such an investigation focuses on the facility’s infection control practices; whether it has been properly screening all staff and providers of critical services to residents; and whether it has been following all state and federal COVID-19 related guidance.”

The nurse interviewed by The Times said that initially patients were isolated in the back of the nursing home, a fact confirmed by Maloney.

“It was heartbreaking,” the nurse said of the deaths. “These people work hard all of their lives. They raise families. It wasn’t fair. It shouldn’t have been a way they left this world.

“I think, honestly, it was heartbreaking because you get close to these patients and you get to know them. You’re taking care of them and they become a part of you. We already know they’re frail, and this wiped them out.”

The Texas Health and Human Services Department declined to say if the Texas Military Department was involved in cleaning the facility.

There also were Health and Human Service Commission quick-response teams to help with testing, infection control and cleaning.

Maloney said he has been in regular contact with Kerr County Emergency Services Coordinator Dub Thomas and Peterson Health officials in an ongoing attempt to help control the outbreak.

The fourth and fifth deaths at the facility happened during the weekend of Oct. 31 and Nov. 2, and it’s unclear if these are Kerr County residents.

The Department of State Health Services, which maintains the state’s COVID-19 dashboard, and the Health and Human Services Commission have varying delays of reporting cases and deaths, and neither completely aligns with the other.

Before October, Kerrville’s five nursing homes had largely avoided the COVID-19 outbreaks that had wreaked havoc in nursing homes across the country. On Oct. 2, Waterside reported one patient with the virus, a positive result the nurse attributes to a visitor. The facility had two employees who had tested positive previously.

Other nursing homes were dealing with employee outbreaks, but had mostly kept it away from patients. From the start of the pandemic through Oct. 2, there were just six confirmed cases of COVID-19 among patients in those five nursing homes.