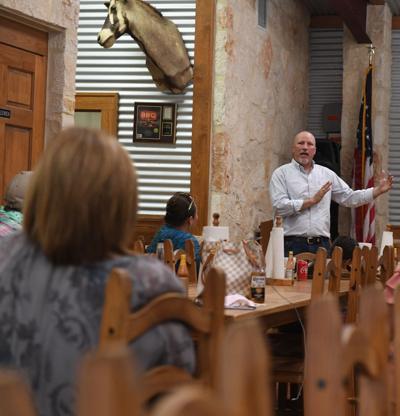 Congressman Chip Roy issued a statement Wednesday alone and jointly denouncing efforts to impeach U.S. President Donald Trump, warning that the basis for it would eventually be used against GOP members of the U.S. House of Representatives.

The House voted 232-197 to impeach Trump on Wednesday. The impeachment trial could begin at 1 p.m. Jan. 20, an hour after the inauguration ceremony begins for Democrat Joe Biden, according to an AP report. According to the report, one purpose of the impeachment is to prevent Trump from ever running again.

In his remarks during House impeachment hearings on Wednesday, Roy took aim at Trump, saying that the president, in weeks leading up to Congress’ Jan. 6 certification of presidential electoral votes, had “seeded the false belief among” his supporters that “there was a legal path for the president to stay in power.”

“It was foreseeable and reckless to sow such a false belief that could lead to violence and rioting by loyal supporters whipped into a frenzy,” Roy said in his Jan. 13 House remarks, which his office also sent to The Kerrville Daily Times.

As Congress debated on the certification of the presidential election on Jan. 6, Roy had broken ranks with some GOP members in saying the U.S. Constitution wouldn’t allow Pence, as president of the Senate, or Congress, to disregard the votes of Democratic electors submitted by states where some lawsuits had alleged widespread voting problems.

Roy also didn’t express support the audit of the election as suggested by Sen. Ted Cruz during the Jan. 6 joint session of Congress — a session interrupted when the capitol building was breached and occupied by people who apparently had convened at the nearby Ellipse for a pro-Trump rally. Cruz had urged an audit in disputed states over the next 10 days.

Roy and at least six other GOP House members argued, in a joint statement Jan. 6, that only the state legislatures could legally be involved in the issue, and the only way for Trump to win would be for various legislatures to certify different electors. In disputed states, GOP electors had submitted ballots to Pence, but those weren’t certified by the legislatures.

“The president of the United States deserves universal condemnation for what was clearly impeachable conduct — pressuring the vice president to violate his oath to the Constitution to count the electors,” Roy stated.

But Roy, in a joint statement with Nancy Mace (R-S.C.), Dan Crenshaw (R-Texas) and John Curtis (R-Utah), stopped short of making a legal determination as to whether Trump’s conduct was impeachable.

“We condemn the president for the words and actions which contributed to these events and encourage every member of Congress to similarly condemn,” the joint statement reads. “While we do not venture to make legal judgement of the president’s intent regarding Wednesday’s demonstration, his actions were reckless. No president should ever, among other things, promote clearly unconstitutional theories that risk the stability of our nation and, in particular, do so to the detriment of the peaceful transition of power.”

Roy, Mace, Crenshaw and Curtis, in their statement, opposed the effort to impeach Trump.

“Voting to impeach the president seven days before his departure from office serves little purpose given the Senate will not be able to hold a trial by that time and risks establishing this impeachment as politically motivated,” the joint statement reads. “Furthermore, the articles are flawed, charging crimes that are lacking the requisite element of intent. For these reasons and others, we will not be voting for these articles of impeachment despite our strong belief the president’s actions were wrong.”

According to the joint statement, the impeachment effort was not “a sober review of the facts” that established legal standards, but rather an effort to “target members of Congress as well with threats of blanket censure, devoid of specific examples of individuals members’ actions.”

Roy and the other Congressman argued the attempted impeachment undermines due process “and inflames an already starkly divided nation by politicizing what should be a serious and thoughtful bipartisan review.”

The Texas Democratic Party issued a statement to the media on Wednesday supporting Trump’s impeachment, pointing to the occupation of the capitol building on Jan. 6 and the deaths and property destruction that entailed.

Trump has denied inciting the Jan. 6 storming of the capitol building.

“The president of the United States incited and inspired a domestic terrorist attack against the legislative body of our country,” reads the Jan. 13 Texas Democratic Party statement. “It was an assault on our Capitol, on our Constitution, and on our people. Never in our history has a more egregious crime been committed by a sitting president. Trump betrayed our democracy, our national security, and our entire country. The Trump era will go down as a dark time in American history. Today, Democrats pursued accountability and showed there must be consequences for Trump’s dangerous actions.”

Chip Roy may have gotten himself into a primary challenge by voting his conscience and his duty as he voted “no” when asked to overturn the Biden election. For that I applaud him.

However, he is now faced with another bridge crossing from his political career and standing in his party to his duty to his oath and country. It was a bridge too far for Mr. Roy.

As a lawyer, Mr. Roy knows full well that impeachment is a political process and doesn’t require him to make legal judgement, as he claims.  Impeachment uses what I would call the political “smell” test. Donald Trumps actions “smell” like sedition.  And, while the House moved at great speed getting these articles to the floor for a vote, I fear, that as the Trump Administration comes to an end, we will learn more evidence of Mr. Trump’s action or his lack of action that makes this action appropriate. Mr. Roy claims the American voter should have a role in this process. Does Mr. Roy not know his job?  Does he not understand that he is there to represent us, the citizens of Texas 21 and this is what he was sent to Washington to do?

Finally, I would say that impeaching Donald Trump and removing him from the presidency is what Mr. Roy and the rest of the Republicans would embrace on any other day of the week. They would say this is about law and order. But, not just in this case, evidently.

Steve Lehman, Republican precinct chairman for 312 and a local election judge during the recent election:

My response to this will be similar to the letter I sent Chip Roy about his address to Congress.

Better to misinterpret the Constitution today, than to watch it burn tomorrow. The election was stolen. There will be consequences, for the Democrats trying to destroy our Republic and for the Republicans willing to surrender it. Chip Roy just ended his political career, and/or has destroyed the Republican Party. Millions of us are ready to turn our back on the Republican Party for their cowardice of the last two months.

Chip Roy speaks about the President and impeachment on Jan. 13, at the U.S. House of Representatives.