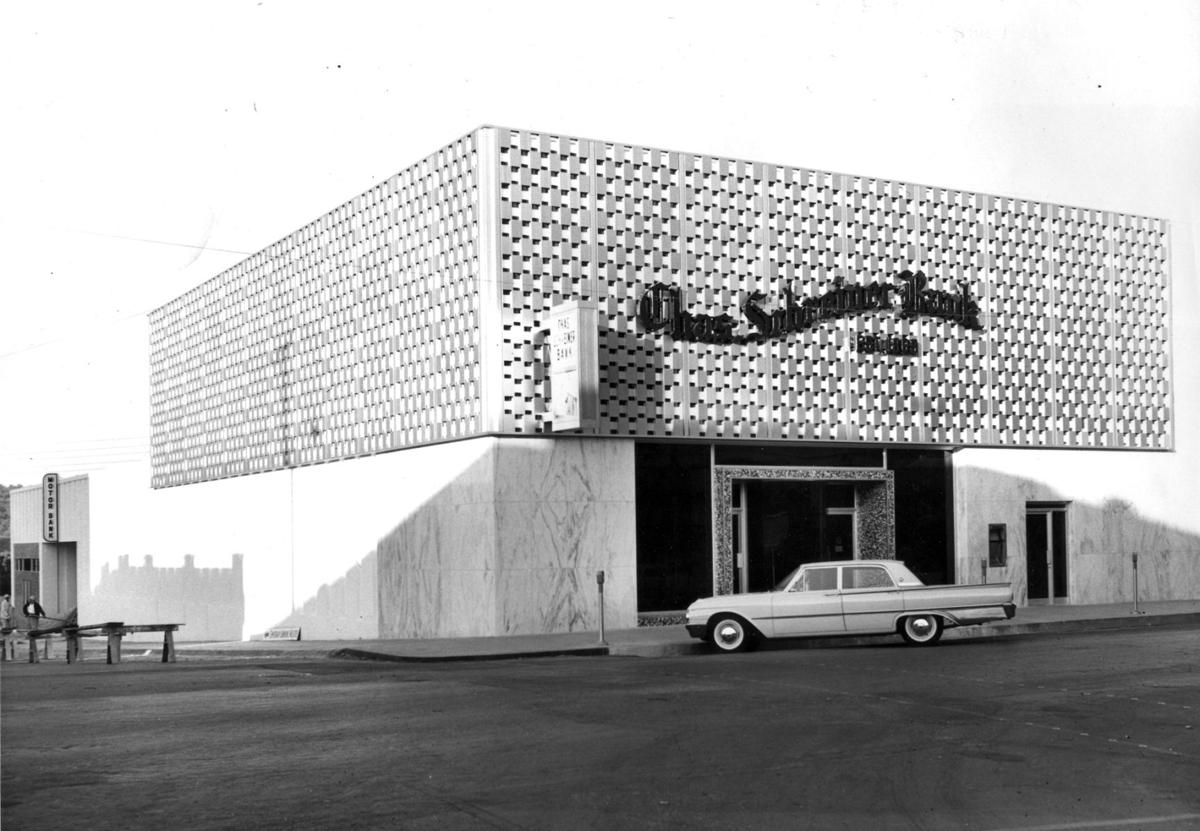 The front of the “modern” Chas. Schreiner Bank. The new facade was added in 1961. 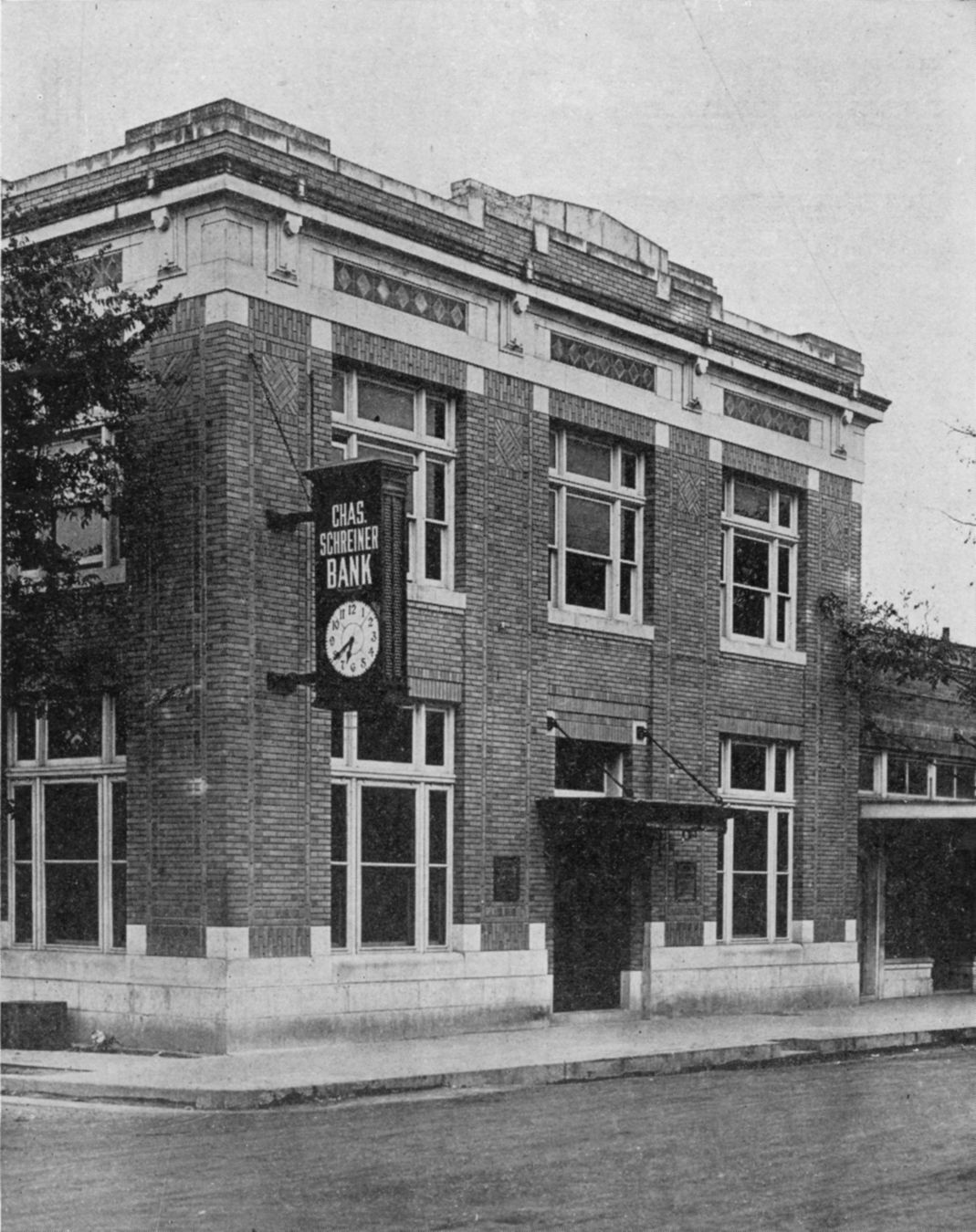 The front of the old Chas. Schreiner Bank, which was built in 1914. The building stood at the corner of Water and Mountain streets. (Mountain was later changed to Earl Garrett Street.) 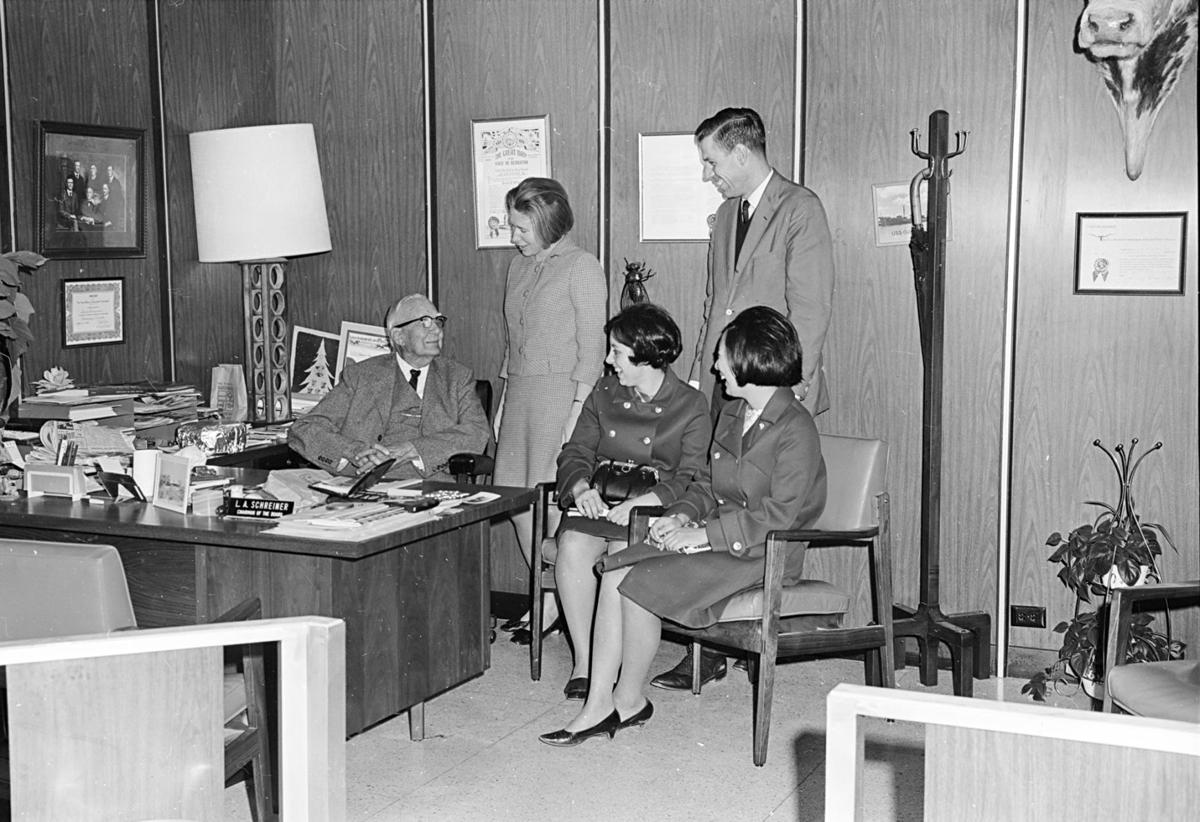 L.A. Schreiner, the chairman of Chas. Schreiner Bank, greets customers in his office.

The front of the “modern” Chas. Schreiner Bank. The new facade was added in 1961.

The front of the old Chas. Schreiner Bank, which was built in 1914. The building stood at the corner of Water and Mountain streets. (Mountain was later changed to Earl Garrett Street.)

L.A. Schreiner, the chairman of Chas. Schreiner Bank, greets customers in his office.

Legend says Charles Schreiner started the first bank in Kerrville by putting money and gold entrusted to him by his customers under a loose board in his one-room store. The “safe” was then secured by rolling a flour barrel on top of the loose board.

I imagine there’s a grain of truth in that story. In 1869, when Charles Schreiner and August Faltin opened their store in downtown Kerrville, there were no banks here. In fact, there was little or no cash in this part of the world.

Business here was mostly conducted by barter, and in those rare cases where gold or cash were exchanged, a trusted place to store that cash was needed. Schreiner provided that safe place, and he also provided a way for his customers to call upon their deposits to buy from his store or to buy necessities from other suppliers, including the buying and selling of livestock.

Ayala was a one-legged cowboy who had worked for Schreiner for many years and who Schreiner trusted very much. Ayala presented himself as a cowboy of average means, riding a plain horse and carrying a moral (or nose bag) attached to his saddle horn by a grass rope. In the nose bag, Schreiner placed the gold and money to be deposited in San Antonio.

Ayala was one of the least likely persons to be suspected of carrying a fortune in gold along the early trails from Kerrville to San Antonio. He made this trip many times for Schreiner, without incident, and with the fortune untouched. There was never a breach in the trust Schreiner placed in Ayala.

As Schreiner’s business grew, it became necessary to separate the banking operation from the Schreiner store, and so, in 1898, the bank became an independent operation, though it still operated in the same building as the store. Instead of taking your banking business to the office of the Schreiner store, you took it instead to a different part of the building. Some have suggested the bank itself was on the second floor, though accounts vary.

In 1914, the bank finally moved into a separate building at the corner of Water and Earl Garrett streets, back when Earl Garrett Street was still called Mountain Street. That brick building can be seen in many photographs in my collection of historic Kerrville images, largely because almost every parade during those years passed right in front of the bank.

In 1917, Charles Schreiner divided his many businesses among his children. The bank went to Louis A. Schreiner, which is only fair: Louis had worked at the bank since it separated from the store, in 1898.

Under Louis Schreiner’s leadership, the bank grew and prospered, even during the lean years of the Great Depression, when its policy of encouraging ranchers to diversify and add sheep and goat to their livestock herds helped save more than one family ranch.

In 1959, the Charles Schreiner Bank became a state bank; until that time, it was an unincorporated bank, relying on the personal financial standing of the Schreiner family.

In 1961, a new “modern” facade was placed over the old brick bank building, an aluminum and steel covering of brilliant blue and gold tones, with a white marble veneer added to the exterior walls. I remember visiting a law office on the second floor of the bank after this modernization took place. The old double-hung windows were still there, although they now opened to the interior of the updated “space age” metal skin. It was odd to see.

Louis Schreiner worked at the bank until two days before his death at age 99 in 1970.

That building was torn down in the late 1970s when a new, much larger building was constructed. An open house for the new bank was held in July 1978, and I remember attending the event. I was impressed by the new building. I especially liked the mesquite block floor, and the items they brought from the old building, including a work of taxidermy, “Ol’ Meany,” the mounted head of a solemn longhorn bull, which had been a fixture in the old building.

Schreiner Bank failed in April, 19, 1990, and its assets were acquired by NCNB Texas, which operated the bank for several years. Most recently, the bank building was occupied by a branch of BankAmerica, but the building has been vacant for several years.

Joe Herring Jr. is a Kerrville native who remembers Louis A. Schreiner sitting at his desk at the Charles Schreiner Bank.