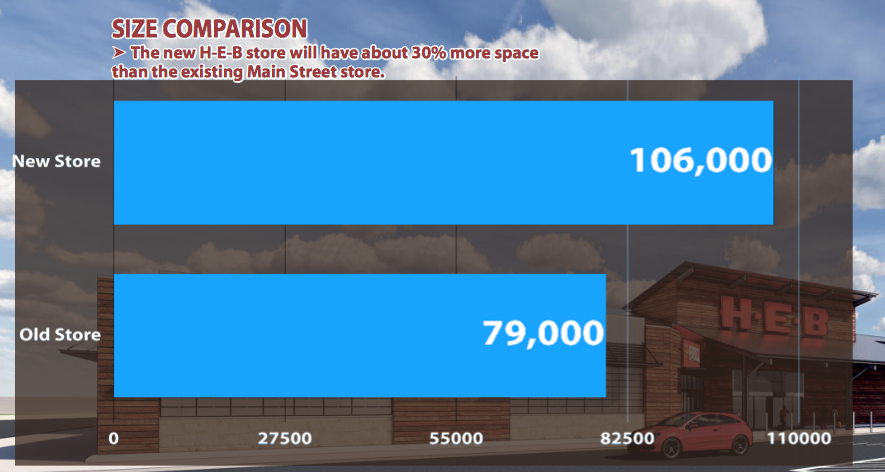 The new H-E-B store will have about 30% more space than the existing Main Street store.

The new H-E-B store will have about 30% more space than the existing Main Street store.

Drawing from its past, H-E-B announced Wednesday that its new Main Street store will be a tribute to the company’s founding in Kerrville.

The 106,000-square-foot store will feature a decorative facade similar to the original store that the Butt family started from their Kerrville home in 1905. The new store, which is already underway, will face westward toward Francisco Lemos Street and is expected to open in late 2020.

H-E-B is currently clearing the footprint of where the store will sit, including demolition of a historic home and of old retail spaces fronting Main Street.

While there may be a few brands still available that were sold in the original Butt’s store, including Quaker Oats or Nabisco cookies, the insides of this store will be modern with a wide range of offerings, including H-E-B’s emergent chain of barbecue restaurants.

“We are excited to bring a new H-E-B store to Kerrville, the city where it all started for our company,” H-E-B Public Affairs Manager Julie Beding eld said. “With an enhanced in-store experience and commitment to top-quality service and selection, this new store allows us to continue to serve the growing needs of our customers and provide the community with the best we have to offer.”

The location of the old store will become additional parking for customers and employees. The store will also feature an expanded gas station and car wash.

For the store, H-E-B will introduce design elements that complement the look and feel of the surrounding neighborhood and the Hill Country community, incorporating metal shed roofs and limestone, among other materials.

The limestone used for the store honors the company’s second location for its store, which opened in 1911 at the rock Masonic Building on Earl Garrett St. in Kerrville.

Customers will nd all the signature features and conveniences they expect from H-E-B, with many new and expanded product selections. Some new highlights and updated departments from the store include:

When H-E-B announced plans to build a new state-of-the-art store in Kerrville, there was plenty of specu- lation about what sort of takeout din ing would be offered, but on Tuesday the company announced that it would

include its lauded True Texas Barbecue restaurant in the new store.

In many of the company’s new stores, the barbecue chain has been included and it has been noticed, and Texas Monthly magazine has called it the best barbecue chain in the state. Even the seemingly never-satisfied Yelp reviewers give the small chain 3.5 stars.

H-E-B has been slowly rolling out the restaurants over the last year and has about a dozen operating across the state. The menu is brisket, pork, turkey and sausage, and there’s a slew of other offerings, including massive baked potatoes.

However, the review in Texas Monthly may have changed things.

“The best statewide barbecue chain in Texas is housed inside grocery stores,” wrote Texas Monthly’s Daniel Vaughn in the April edition
of the magazine. “They’re making sides and desserts from scratch, smoking all-natural meats on site every day, and serving it all in a restaurant setting with local beers on tap.”

That recognition earned H-E-B a nod from website Thrillist that named True Texas as one of the best chains in the country.

“They tested the barbecue program at their Mueller outpost in Austin, one of the most modern locations in the grocery empire, and although only 10 locations boast a full True Texas BBQ restaurant, a recent report from the BBQ snob of record at Texas Monthly calling it the best chain in the state means you can expect many more to come,” Thrillist wrote earlier this year.

How do you feel about going out as coronavirus shutdowns ease

While these are simple answers, we encourage you to send us letters about your feelings when it comes to being in public. Email them to news@dailytimes.com