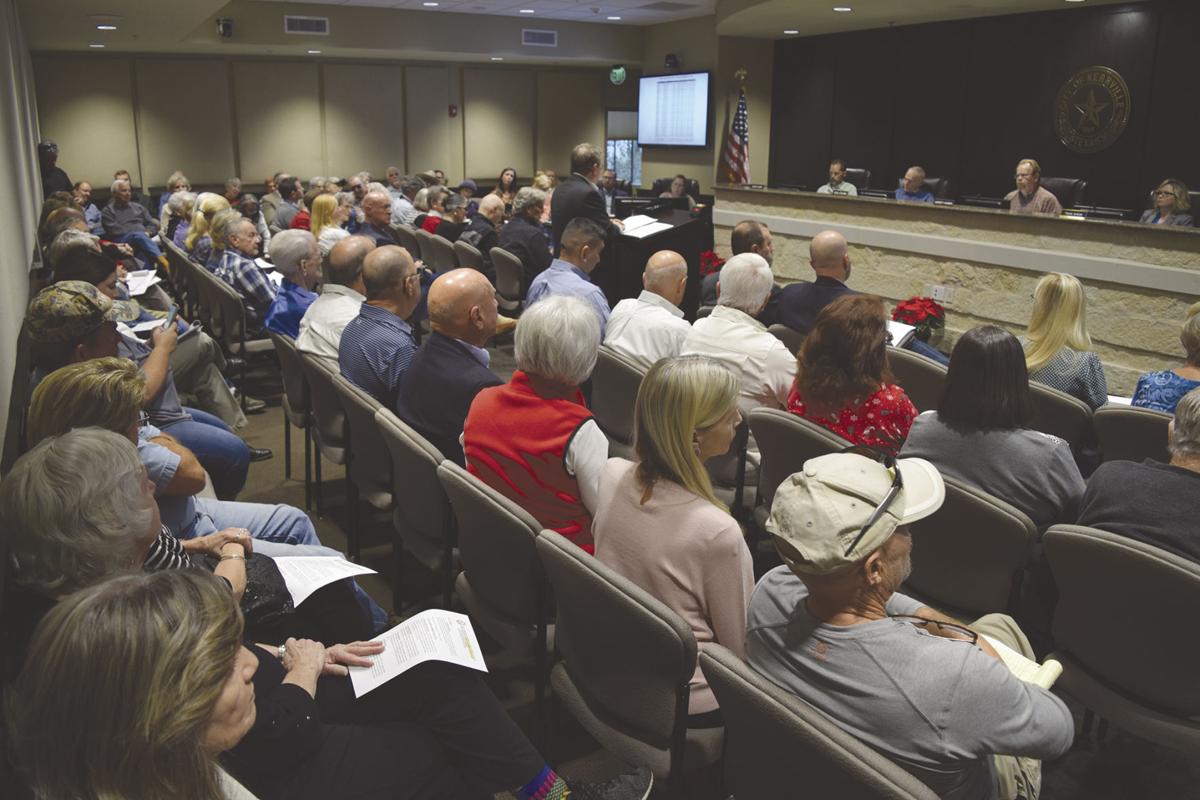 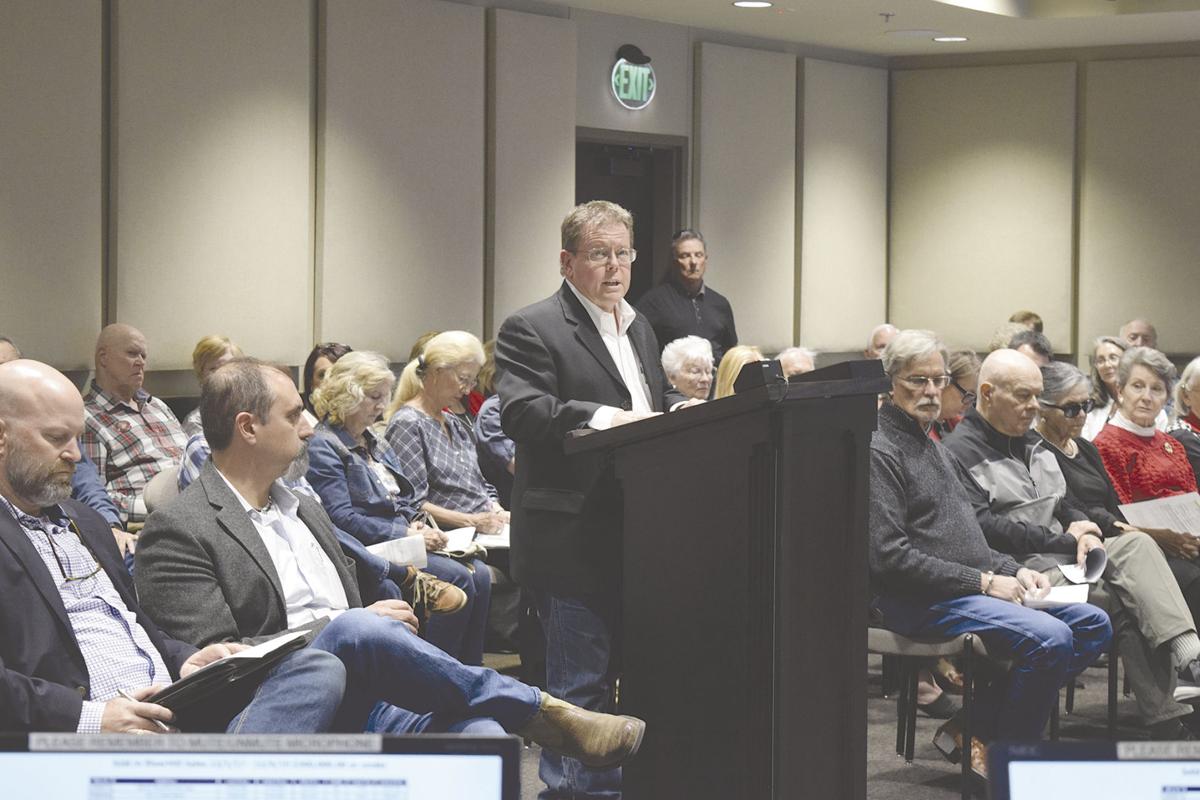 A plan to rezone more than 200 acres that would clear the way for more than 500 homes to be constructed hit a major snag Thursday night when the city of Kerrville Planning and Zoning Commission deadlocked in a 3-3 vote on what to do with the project.

Led by residents in the Riverhill neighborhood, which would adjoin the new development, commissioners were faced with significant opposition in the meeting.

Every Riverhill resident — including former Mayor Jack Pratt — who spoke during the public hearing opposed the development, with some citing concerns about increased traffic, degraded property values and quality of life.

The project will now most likely land in the lap of Kerrville City Council, which will have ultimate say on whether the project moves forward.

As part of the Kerrville 2050 plan, workforce housing was a major theme for the City Council, and on Wednesday, Councilman Gary Cochrane said he supported the development. Mayor Bill Blackburn, who was not at the Planning and Zoning meeting, has also said that affordable housing was an important need for the city.

The land that once was designated for large homes on 10 acres could now have lot sizes as small as 5,400 square feet. The plan was met with fierce opposition by area homeowners.

The city received a petition with 80 signatures opposing the zoning changes. The P&Z conducted a show-of-hands vote and counted 59 opposed and six in favor.

The project, which would be developed by national builder D.R. Horton, features 510 lots of varying sizes. The homes would be single-family, detached homes in the $200,000 price range.

One of the few people who spoke in favor of the project was a man who represented Hill Country Telephone Cooperative. He said he was worried about retaining good employees due to a housing shortage.

After most people had aired their concerns, owner/developer Chuck Cammack said he would be willing to give up some lots next to Riverhill and limit adjacent homes to one story.

An engineer presented a traffic study that he said found no significant effect from traffic from the proposed development, which most residents who spoke openly questioned.

The development would provide connections into the Riverhill neighborhoods, and have a major entrance on Medina Highway.

P&Z Chairman Garrett Harmon said the commission wanted to find a balance between the desires of the local retirement community and the working people who need affordable housing.

“It’s going to be hard to retain that workforce if we don’t get a handle on this housing,” Harmon said.

The developer said he would be willing to enter into a new development agreement with the city, presumably to take into account some of the concerns raised by current residents. The developer may appeal the commission’s lack of approval to the City Council.

County commissioners: No bond funding for new road to connect Texas 16 to 173

Plans for a road to ease traffic in Riverhill neighborhood lost some momentum this morning.

Affordable housing? I think not. A 200k home would carry a mortgage, taxes, and insurance of around $1200 a month. According to the city, affordable housing for those making between 48k and 72k. Statistics say that your housing should not cost more than 30% of your income. So if you make 23 bucks and hour, you can afford the 200K home. Is that the affordable housing that the mayor is espousing? And how many homes in this development will be of 200k or less? I bet not many.

More salt in the wound to contemplate. Go to Kerr cad, search ownership for Riverhill. There are several entries. Look for the club house, golf course valuations. I noted 17 acre property valued at less than $20,000. It would be interesting to total up the golf course, the club house and support bldg etc. and see what “fair” looks like when held up to the light.

What is interesting is that the Kerrville Times Editor is refusing to print ANY negative opinions in the paper. Only those that support this "affordable housing". You saw what happened in Boerne with their clown town council? Welcome to the new Boerne. The ONLY way to fight them is in court and make it expensive for them to do any project. EPA, traffic suits, emergency services not enough, hit them with every suit heard of and then wait to vote the clowns out before they ruin Kerrville. Check their bank accounts and phone records while you are at it. If they want affordable housing, then build apartments all over the area with $600-800 rents like we did when younger. And by the way, where are all the workers coming from? No new businesses! Plenty of work, no workers which means no need for affordable housing?!!?

Good post Aggie'66. I especially like the part about voting the current bunch (city and county) out of office. Both the top position in the city (Mayor) and the top position in the county (County Judge) share one thing in common. When they ran for office, they went into great detail to explain that they did not intend to run, but were prodded and convinced to run by a group of local businessmen. This is the pure definition of a handpicked politician. In order to put one's finger on the real boogie men responsible for the current money ball being played in the city and the county, one need only peel back one layer of the onion for starters, and all roads lead to the same GOB’s, who act as sort of an underboss. Before voting for a candidate, I suggest running them through a GOB detection process to root out and any and all affiliated with the same cast of characters that have been bleeding us for decades.

I think property taxes are way too high. I see a high school built like a Taj Mahal on my tax money, I see a retirement community funding a very small student population. I see property values in one neighborhood vs another having no discernible rationale. In particular, look at Riverhillproperty value increases over the last five years versus almost any other neighborhood. Look at their lot values versus others. It not just Riverhill it’s just a tendency to overvalue lower end neighborhoods in general.

Im sorry you feel your property values might decrease, gee do you think this doesn’t happen everywhere else in town when the zoning changes. I believe that new addition will put more money in the tax coffers than not building there. It really is humorous to listen to the same folks yelling for affordable housing for years to now think it ain’t such a good idea after all since its next door. You guys can build a wall and solve your problem, we need the housing.

Fog, you are probably right about the dichotomy in residential real estate valuations. That is a drop in the bucket compared to the rank fraud going on in valuations. What do you think about a rock quarry(s) claiming ag exemption? Of course this is a felony and the remedy is tax rollback, penalty and criminal prosecution, that is of course, unless you are a GOB connected person in Kerr County. Now it is true our appraisal district and board to include the KISD looks the other way, and all local LE look the other way and both DA’s look the other way…you see they have a case of situational autism when it comes to the obvious and really big issues. This is Texas Boss rule.

The situation with the ag exempt open pit mines just east of town is so outrageous, the SA newspaper did a feature story on it about 10 years ago. No surprises here, as this is just another story in our history as a terribly corrupt county. Who takes the position I am wrong on the facts?

Fog, our "woke" Mayor thinks that property values are too high in Kerrville. How would you feel if your tax money was being put to work to lower your own property value? In any event, your post and Blackburn’s position mirror current SJW thinking which presupposes folks with resources have benefited from privilege, and that gut punching their economy and lifestyle is their overdue comeuppance. I am in constant awe of the brilliance of the GOB’s in hand picking a socialist mayor and real-estate council in order to achieve their goals. I have many bad things to say about the bosses, but I will never say they are dimwits. The entire process from inception to solicitation of candidates to meet and greets to election to EIC…etc., has been a brilliant symphony.

Oh, not in my backyard is alive and well in Kerrville. Folks the residents of Riverhill have enjoyed the good life at the expense of the rest of the taxpayers for years. Take a look at property tax lot values in Riverhill and then compare them to yours! Wow. They have taken Riverhill Blvd and done everything possible to make it unusable for everyone but residents of this sagging silk stocking development. The same folks clamoring for “affordable housing” who happen to live in the neighborhood now see much less of a need. I have a suggestion. If they don’t want this project adjacent to their neighborhood then pony up the money and build us that affordable housing in a place they find suitable for the great unwashed. Your indignation is laughable.

With all due respect to the good folks who live in Riverhills, they should have seen this coming. When an insider developer teams up with an insider lawyer and they sponsor meet and greets for their political wing and start paying $20.00 a vote, the red flags should have been elevated in Riverhills. Even Aspen Colorado has found ways to deal with employee housing without resorting to cul-de-sac cookie cutter future ghettos, and the cost of housing in Aspen puts Kerrville in the subatomic scale. I am guessing that getting away from the type of proposed development is part of the reason many of the folks moved to Riverhills in the first place. In my opinion, there is misplaced element of social justice on the part of Mayor Blackburn, wherein sometimes he sees the fruits of hard work as privilege, and therefore slamming a cul-de-sac, cookie cutter tract home development in juxtaposition with Riverhills is a good thing. Blackburn has no experience in city planning, and he is learning on the job by trial and error. This is the only beginning, and there is plenty more to come from this new group running Kerrville.