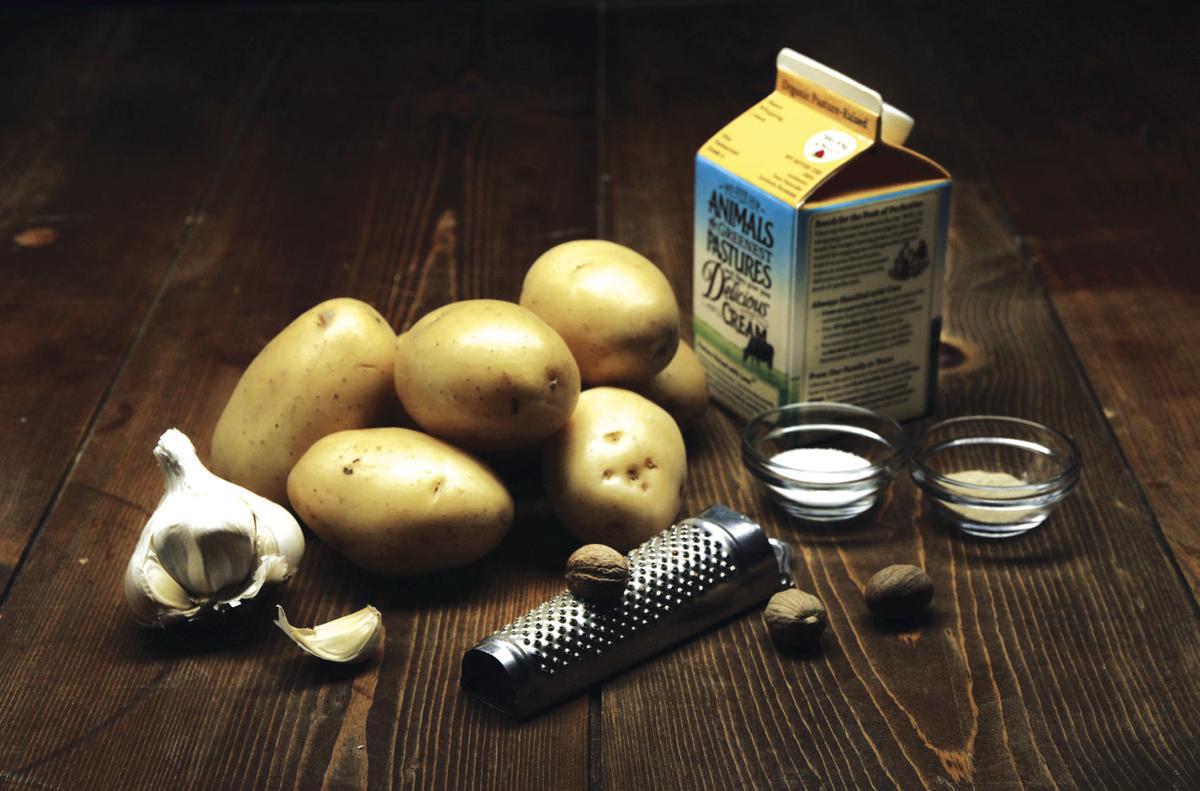 The ingredients for pommes dauphinoise come together in one creamy casserole. 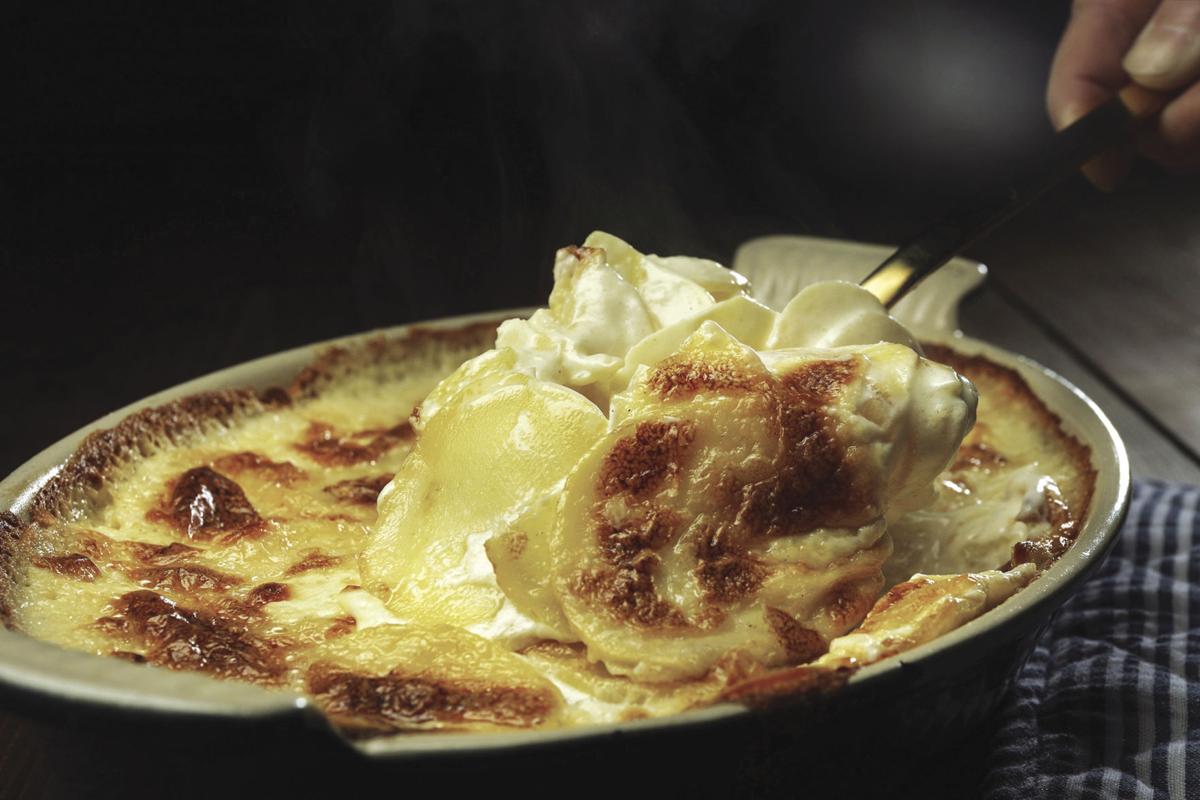 The ingredients for pommes dauphinoise come together in one creamy casserole.

Remember the first time you performed brain surgery? Yikes, what a mess, right?

As it turns out, poking around the coconut’s not unlike making pommes dauphinoise, that creamy, strati ed casserole of potatoey French crazitude. Sure, they’re both daunting, but, once you get the hang, you’ll be the belle of the gustatory ball.

WHY YOU NEED TO LEARN THIS

Oh, sure. You didn’t ask why you needed to learn brain surgery, but you’re
asking why you need to learn dauphinoise potatoes? Honestly, Madge, sometimes I just don’t understand your priorities.

THE STEPS YOU TAKE

Here are some things about dauphinoise potatoes (aka au gratin or scalloped potatoes) and food in general: First, you’ve probably noticed that, whether it’s our dreamy potato side dish or chocolate chip cookies or a steaming rack of Spam, the internet’s fairly rotten with recipes. Nine bajillion and three, to be exact.

You’ve also noticed the multitudes of hyperbolic scriveners promising breathlessly “the best” recipe, “the best” restaurant, “the best” whatever. Feh. I hate to break it to you, kids, but there is no best. Ever. And that’s because of The One Absolute Truth in the Universe. You remember: There’s no accounting for taste.

In other words, I can help you make a perfectly palatable dauphinoise potatoes, but I can’t predict how you’ll like it, because, well, there’s just no accounting for taste, is there? Add to that the fact that anytime we go into the kitchen, the choice of ingredients, coupled with the method of preparation, can result in fnished products as wildly different as consequentialism and deontology.

Our best (sic) option, then, is simply to give you the method for putting together a dauphinoise and then letting you take it from there.

The components are simple: thinly sliced potatoes baked in a liquid dairy product with a little garlic, and maybe some cheese.

The world of potatoes exists on a spectrum between what we call “waxy” and “mealy” (aka “starchy”). Any potato will work, of course, because it’s a potato. However, for dauphinoise, we like the starch, because it thickens the sauce and inhibits curdling. Thus, the mighty russet, repository of starch galore, is the typical tater of choice.

Speaking of starch, usually we submerge cut potatoes in water to prevent browning. Not here, though, because soaking also dissolves starch and, as we said, with dauphinoise, starch is our pal.

Peel and slice about 2 pounds of taters into 1/8-inch thick rounds. If you’ve got a mandoline (See “Prep School: How to use a mandoline, and keep your ngers” on the internet), use it. Unless you possess the knife skills of an assassin, it’s easier, faster and it produces more consistent cuts.

As much as I love garlic, it’s easy to overdo. Thus, one clove, minced, is usually enough. Two, if you’re in a high-density vampire neighborhood.

Normally, it’s heavy cream, about 1 cup per pound of potatoes. If that’s too rich, try half and half, or cut the cream with milk or stock. You could also use plain milk, or 2 percent, or even skim milk, if your goal is to have a body like Iggy Pop.

Now, low-fat dairy products curdle during cooking more easily than high-fat dairy products. Thus, if you’re using milk, you can decrease the likelihood of curdling by stirring in 2 tablespoons of potato starch dissolved in an ounce or two of water.

Whatever you’re using, to further inhibit curdling, bring the whole megillah to a boil before baking: Combine the dairy, sliced potatoes and garlic in a saute pan or skillet, season it and set it over medium high heat.

A cheeseless dauphinoise never hurt anyone, but, I love Gruyere. Cheddar, mozzarella or anything melty will work, too. Shred roughly half a cup per pound of potatoes.

Once its contents are all a-simmer, the skillet can go straight from the stovetop into the oven. If you’re using cheese, scoop half your potatoes from the skillet into a greased baking dish. Sprinkle on half your cheese, cover with the remaining potatoes, then add the rest of the cheese and pour in the simmering dairy.

Bake the dauphinoise in a 350-degree oven for about 45 minutes to an hour, until the potatoes are tender as young love and golden brown as an amber wave of Kansas grain. If they’re tender but still pale, crank the heat to 450 and bake another 5 to 10 minutes.

Finally, when the dauphinoise emerges triumphant from the oven, let it rest for 15 to 30 minutes before serving. Or, and this is what I like because I’m pfancy with a silent “p,” you can refrigerate it — up to several days — so it sets up nice and stiff, like the breeze off the Bosporus.

To serve, use a knife or biscuit cutter to render it into individual portions of aesthetically pleasing geometric shapes, like a circle, rhombus or a heptadecagon. Place the servings on a parchment covered baking sheet and flash them in a hot oven for 5 to 10 minutes, just to warm them through, and, voila, a beautiful side dish that’s as French as Edith Piaf eating a snail.

James P. DeWan is a culinary instructor at Kendall College in Chicago and the author of “Prep School,” a collection of his columns available on the internet, and co-author of “Zwilling J.A. Henckels Complete Book of Knife Skills.”

Our culinary students at Kendall College make this dish as part of their practical exam. It’s delicious right out of the oven, but if you have time to make it in advance, refrigerate it overnight after baking. The next day — or up to three days later — cut it into squares or rounds before reheating and it will hold its shape for an elegant presentation.

1/2 teaspoon white pepper, or to taste

While mixture comes to a simmer, slice the potatoes into 1/8-inch thick rounds on a mandoline or with a very sharp knife. Do not store them in water as that will wash away some of the starch.

Stir the potatoes into the simmering liquid. The liquid should cover the potatoes by about 1/8 inch. This will lower the temperature a bit. When the liquid returns to a simmer, about 5 minutes, taste for seasoning. It’s now ready to go into the oven; leave it in the skillet or pour the entire contents into a greased baking pan.

Rest dauphinoise 15 to 30 minutes before serving or refrigerate up to three days. To serve after refrigeration, cut potatoes into squares or rounds and place in a 500-degree oven until heated through, 5 to 10 minutes.