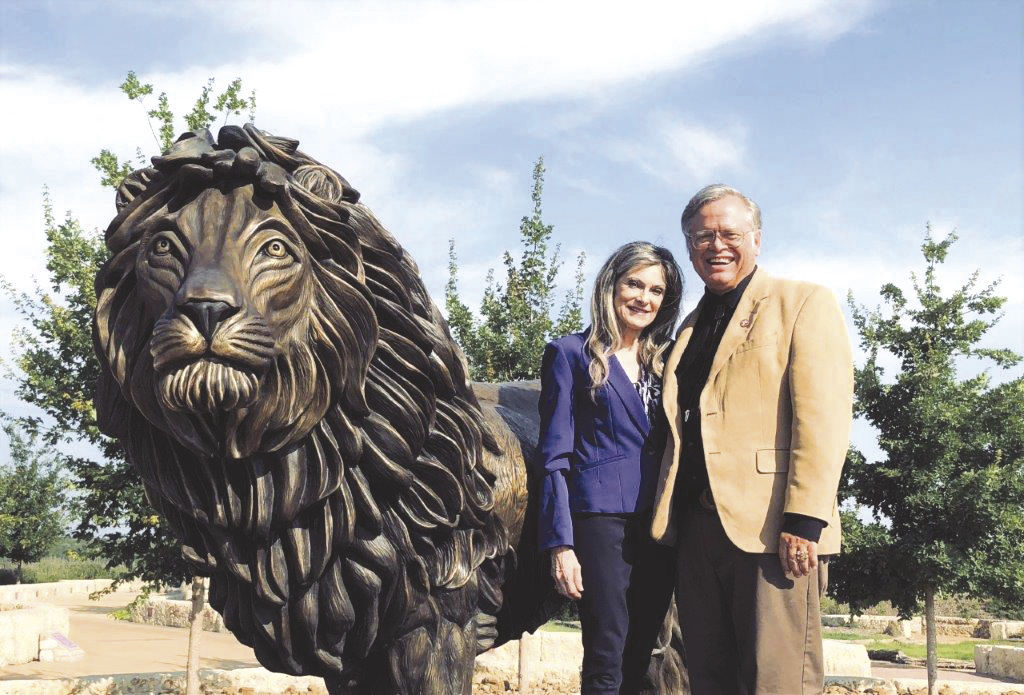 Artist Max Greiner Jr. and his wife, Sherry, with the artist copy of the “Lion of Judah” bronze casting in Kerrville. 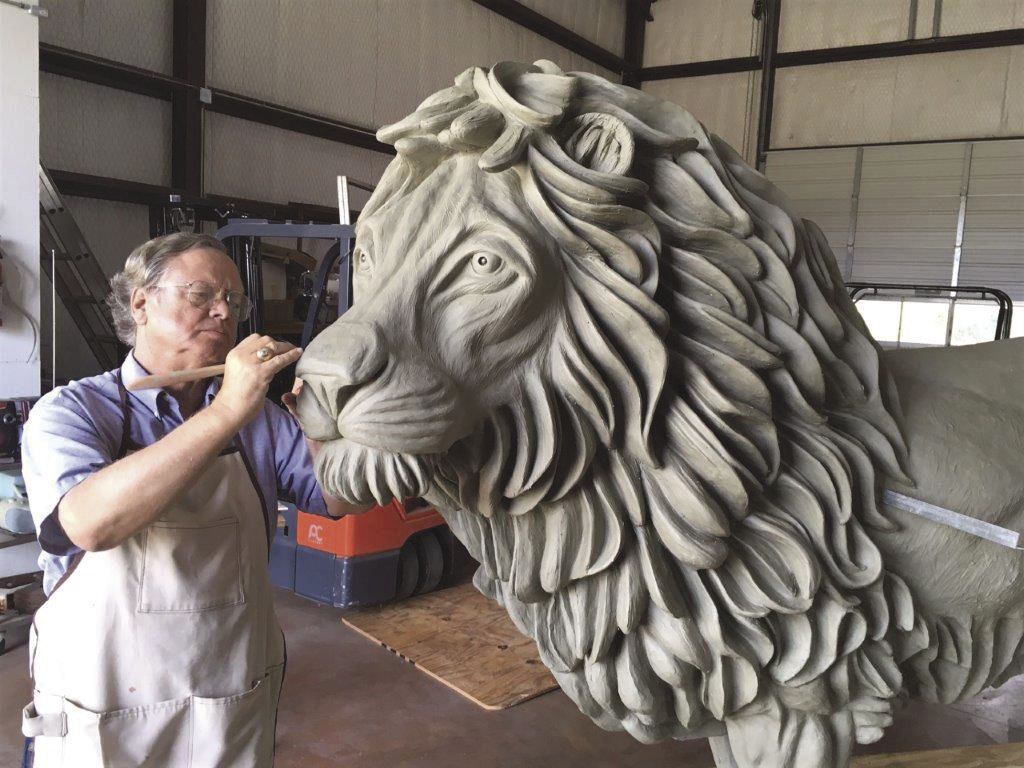 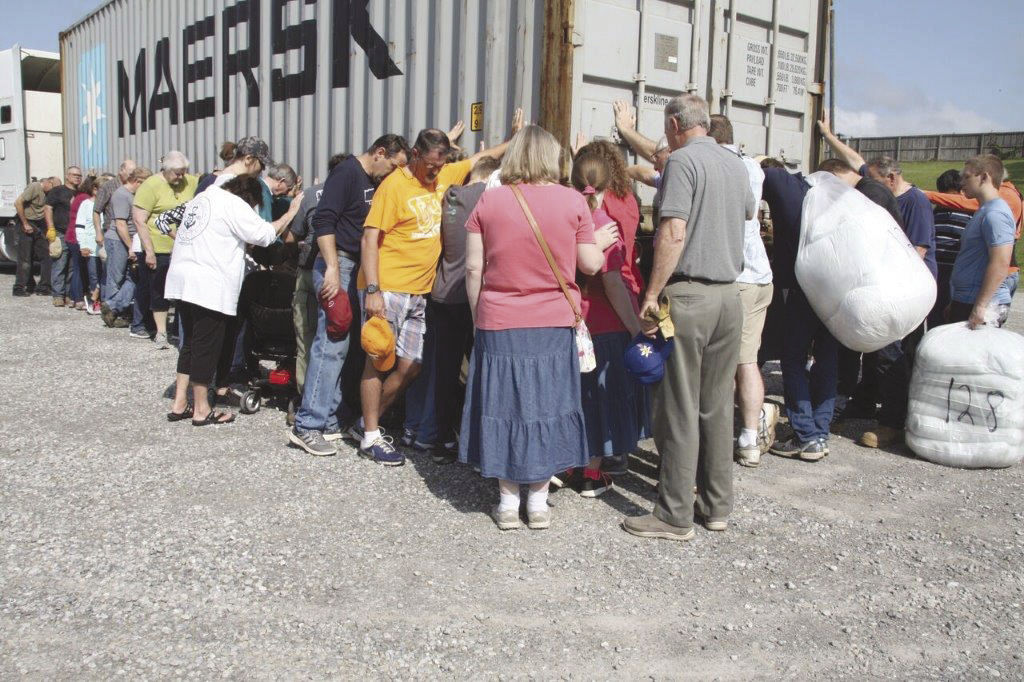 On June 7, 2018, volunteers with Harvest of Israel pray over the lion sculpture after loading it into a steel container bound for Israel. 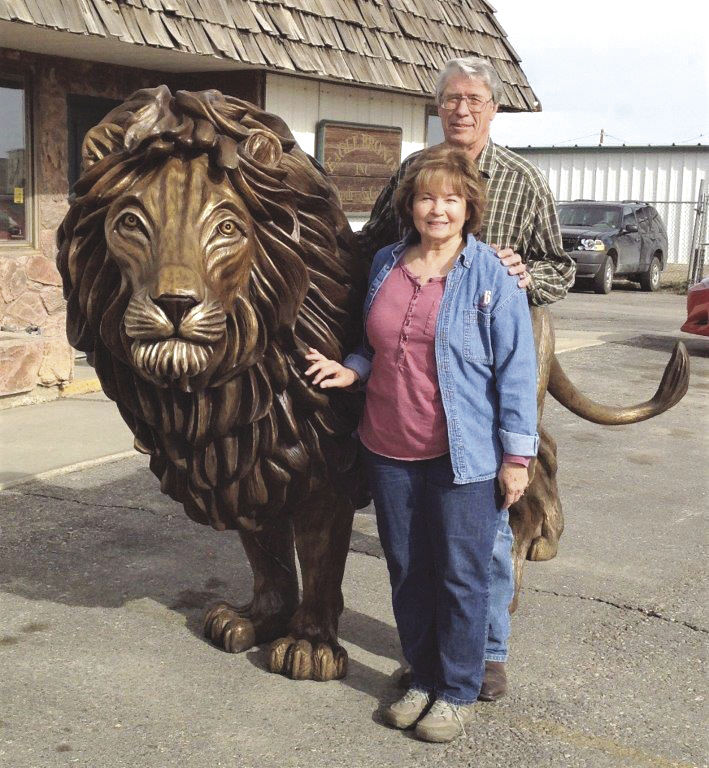 Linda and Bob Morris, owners of Eagle Bronze Foundry, with the finished casting of “Lion of Judah” on April 10, 2018.

Artist Max Greiner Jr. and his wife, Sherry, with the artist copy of the “Lion of Judah” bronze casting in Kerrville.

On June 7, 2018, volunteers with Harvest of Israel pray over the lion sculpture after loading it into a steel container bound for Israel.

Linda and Bob Morris, owners of Eagle Bronze Foundry, with the finished casting of “Lion of Judah” on April 10, 2018.

JERUSALEM, Israel — Predicted rains held back Tuesday morning, May 5, so a new monumental bronze sculpture named the “Lion of Judah” could be installed in the heart of Jerusalem.

The massive 11-foot-long statue was permanently placed in Bloomfield Park, located between the Old City and new Jerusalem, behind the King David Hotel, in sight of Mount Zion and the Jaffa Gate.

“This the most beautiful of all the pieces of art we have in the city because it is a lion and the symbol of the city of Jerusalem,” said Amos Cohen on Tuesday.

Cohen is responsible for all 174 public sculptures in the city of Jerusalem.

At some time in the future, a formal dedication and blessing of the lion statue will take place, but it has not yet been scheduled.

This historic event was 14 years in the making.

Giving a lion sculpture to Israel was the dream of American artist Max Greiner Jr. and his wife, Sherry. It has been their desire to give his most valuable bronze casting from his signed and numbered life-sized edition to the Jewish nation as an eternal symbol of friendship and love between Christians and the people of Israel.

The “Lion of Judah” sculpture is not just another lion statue, according to the artist. The massive 1,123 pound piece of bronze art was sculpted to specifically honor the God of Israel.

“My goal with this realistic yet stylized lion composition was to visually communicate majesty, dignity, strength and courage, while also expressing shalom,” said Greiner, who is an evangelical Christian and strong supporter of the Jewish state. “I prayed to the God of Israel that He would help me sculpt the lion’s face so it conveyed wisdom and authority, but also love and peace. I sculpted the original carving out of clay, patterned after the largest lion that ever lived. Then, I increased the size 5% for God! My art foundry, Eagle Bronze, also donated their profits on this project because the Christian owners, Monte and Beverly Paddleford, love Israel too!”

An internationally collected professional artist — whose work has been owned by U.S. presidents, attorney generals, governors, senators, representatives and the stars of American business, sports, music and film — Greiner said the bronze sculpture is a “gift of love and support” from him, his wife and the “millions of Christians around the world who stand with Israel.”

This imposing piece of art was placed in Israel thanks to the help, prayers and donations of thousands of Christians and Jews over many years. After the life-size art was carved on Aug. 10, 2017, the Greiners recruited their friends, Jeff and Barbara Anderson, founders of Leadership Inc., to collect donations from Christians to cover all the expenses.

“Leadership Inc. is pleased that our gift of the mighty ‘Lion of Judah,’ on behalf of American Christian leaders, is now beautifully displayed in Jerusalem for the perpetual enjoyment of the people in Israel,” Jeff Anderson said.

The first major donors to the “Lion of Judah” art initiative were Bob and Linda Morris, of Collinsville, Illinois. The President of Dodi Yavoh, a 28-year-old pro-Israel ministry, worked for more than four years to see the lion statue placed.

“As a leader of tour groups to Israel during my 58 trips to the land, and because of my love for the Israeli people, I determined that Max Greiner’s ‘Lion of Judah’ sculpture was destined to be placed in Israel as a permanent witness to the nations of G-d’s blessing and acknowledgment of Jerusalem as its eternal capital,” Linda Morris said. “Baruch HaShem Adonai!”

While the art initiative had strong support in the United States, it stalemated until the deputy mayor of Jerusalem became involved. Jerusalem’s Mayor Moshe Lion, the city council and the Public Art Committee headed by Deputy Mayor Fleur Hassan-Nahoum first had to approve the symbolic art gift from evangelical Christians. Then, a suitable location had to be found.

After official acceptance was granted, Nahoum was assigned the job of placing the statue somewhere in the city.

“The ‘Lion of Judah’ is the symbol of the strength and glory of the city of Jerusalem,” said Nahoum, a strong supporter of the art project. “We are honored to accept this wonderful gift symbolizing another strength, and that is the friendship between the evangelical community and the Jewish people. We thank the artist, Max Greiner, for this beautiful initiative that will stand forever in our capital city as a sign of love, friendship and mutual appreciation.”

After selecting Park Blumfield as the ideal display location, Nahoum assigned Orthodox Rabbi Pesach Wolicki the responsibility of installing the statue in the park, after he volunteered his services to the artist and the city. Wolicki’s personal ministry endeavors to build bridges of love and trust between Christians and Jews.

“The lion has always been the symbol of the strength of Israel and the Kingdom of God in Jerusalem. It is no mistake that the coat of arms of the city of Jerusalem today is a rising lion,” said Wolicki after the installation of the bronze on May 5. “The majestic ‘Lion of Judah’ sculpture by the eminent artist, Max Greiner, represents the highest aspirations of the Jewish people as we are reconstituted in our land after 2,000 years of exile — exactly as the Bible foretold. Israel has risen like a lion. Jerusalem is being rebuilt. The face of the lion, as Max planned it with such great artistry, projects power and strength, without conveying arrogance or intimidation. This is a feat of remarkable artistic skill and sensitivity. The word for this complex expression is quite simple — majesty. This is what the nation of Israel strives to be in the world. We are powerful and strong, and at the same time we are a beacon of love and compassion for the entire world.”