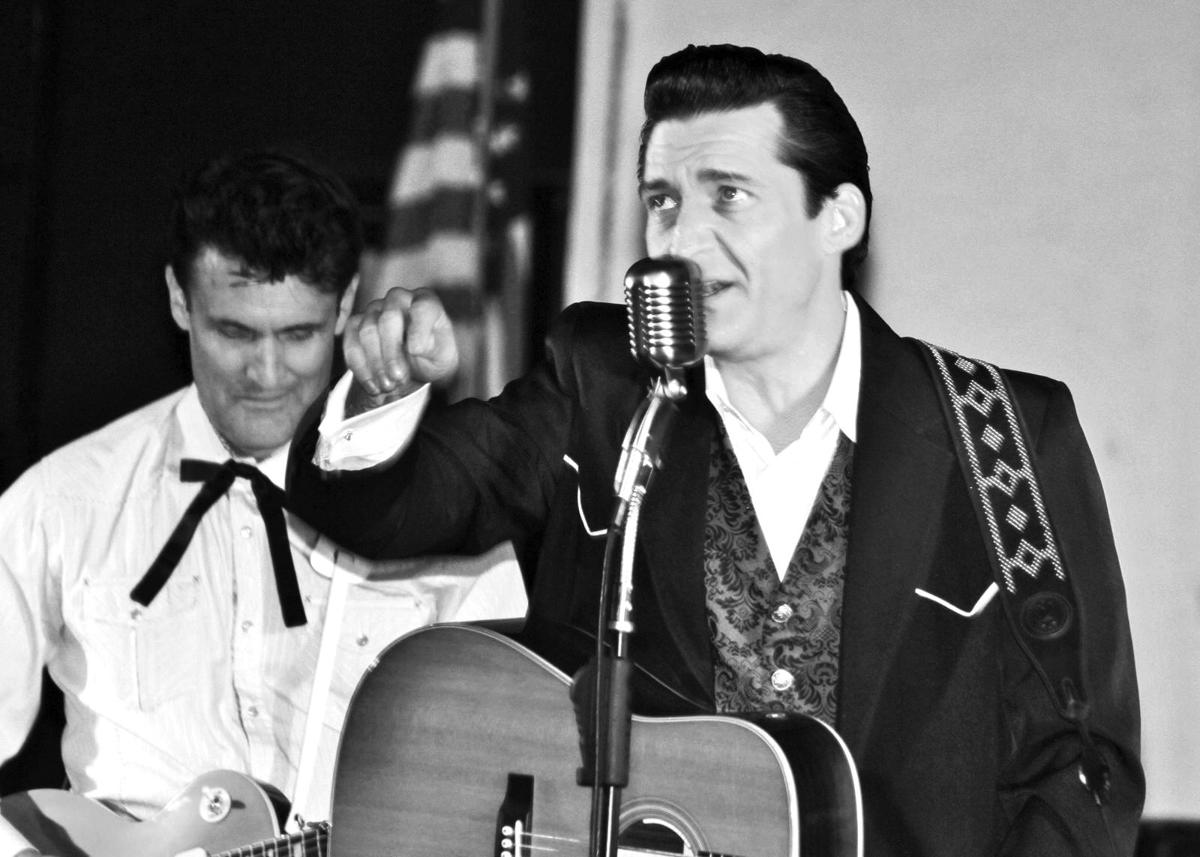 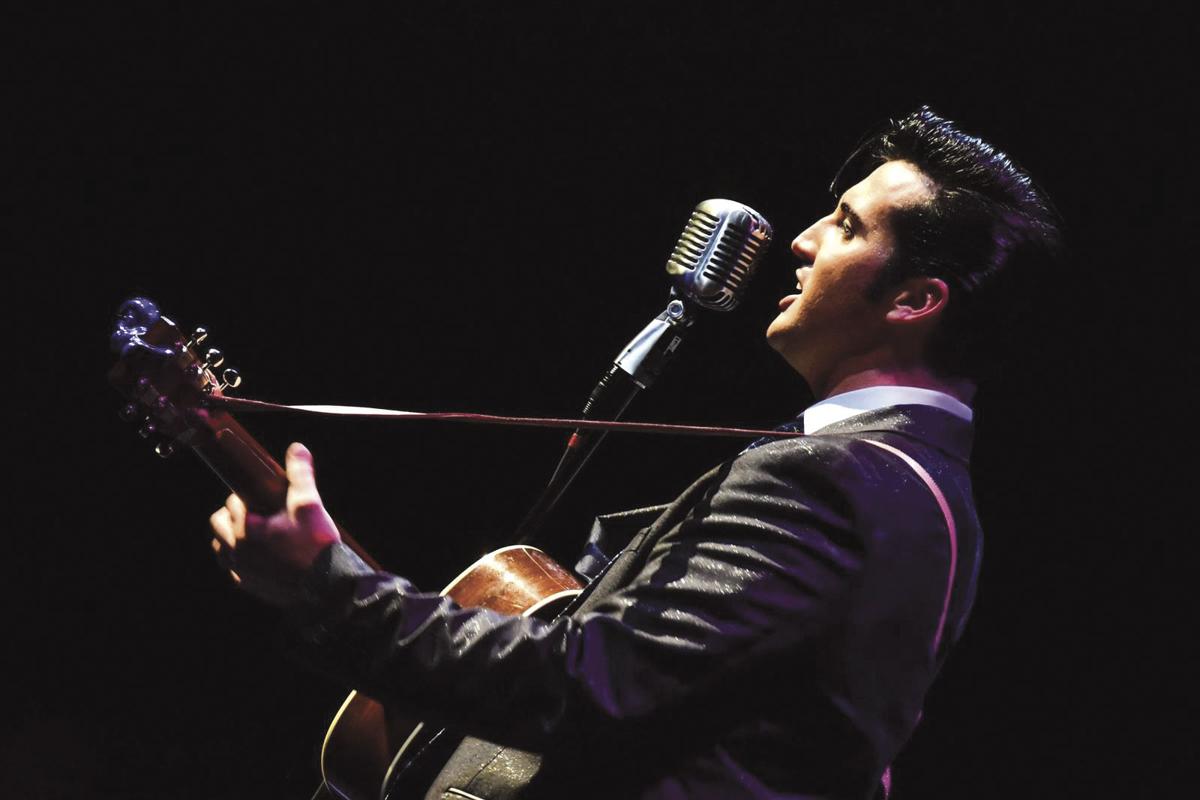 Brandon Bennett as Elvis Presley in “One Night in Memphis.” The show will be on stage at the Cailloux Theatre on Valentine’s Day. 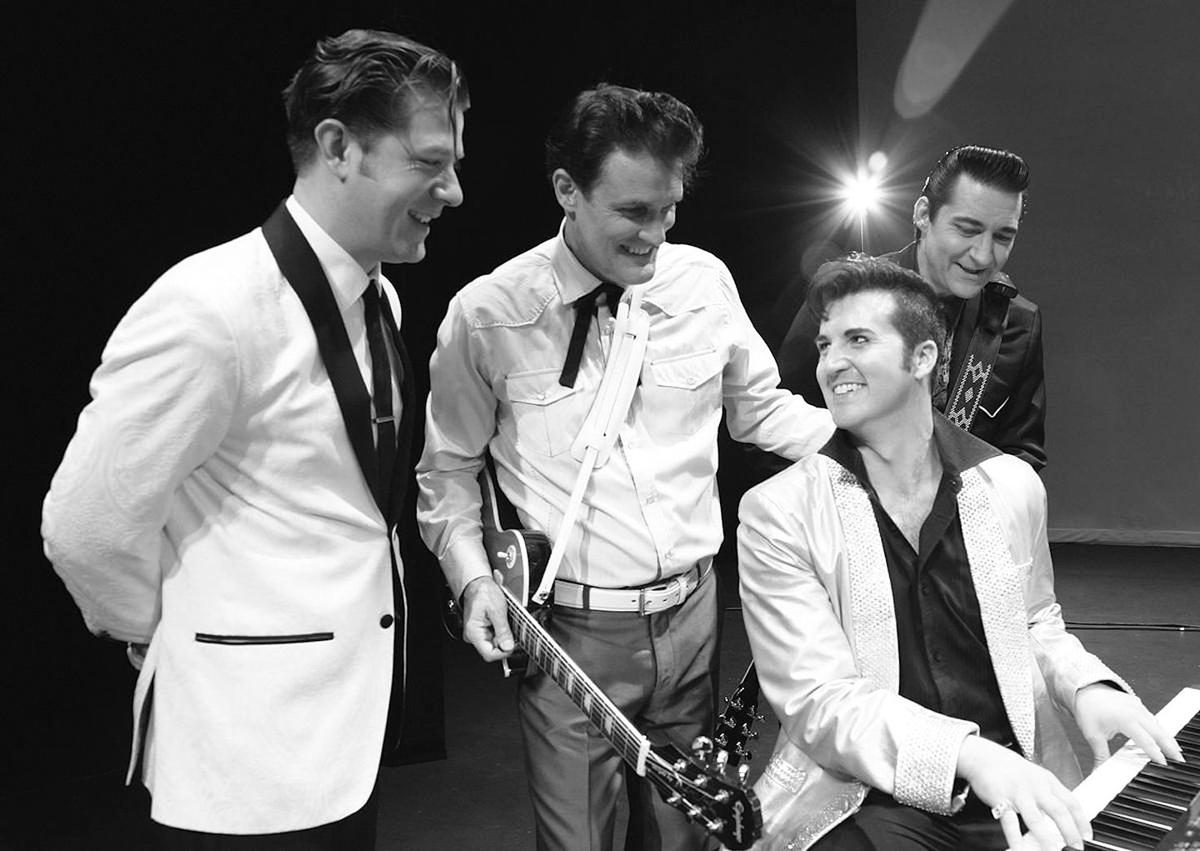 Recreating a famous Sun Records photo are “One Night in Memphis” stars, from left, Blair Carman as Jerry Lee Lewis, John Mueller as Carl Perkins, Brandon Bennett as Elvis Presley and Shawn Barker as Johnny Cash. The four also will recreate the music of the legendary friends at a Valentine’s Day show. 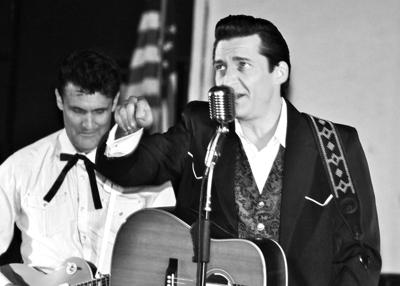 Brandon Bennett as Elvis Presley in “One Night in Memphis.” The show will be on stage at the Cailloux Theatre on Valentine’s Day.

Recreating a famous Sun Records photo are “One Night in Memphis” stars, from left, Blair Carman as Jerry Lee Lewis, John Mueller as Carl Perkins, Brandon Bennett as Elvis Presley and Shawn Barker as Johnny Cash. The four also will recreate the music of the legendary friends at a Valentine’s Day show.

Since the latest offering in The Cailloux Series — “One Night In Memphis” — falls on Valentine’s Day, the show creator wants to make the hit Broadway-styled show even more special for its Kerrville appearance.

“We might just add in a love song,” said John Meuller, who plays the role of Carl Perkins in the “million-dollar quartet” appearing Feb 14 at the Cailloux Theater.

Anything would be icing on this treat that came out of the Broadway smash “Million Dollar Quartet.” Running on Broadway for more than a year, the show put the spotlight on that magical day in 1956 when rockabilly picker Carl Perkins booked a recording session at Sun Records and invited a few of his friends into the studio. Those friends were Johnny Cash, Jerry Lee Lewis and Elvis Presley.

Translating a Broadway show to a concert stage took Meuller, one of the original Broadway cast, four years to get right.

“There is good and bad about presenting a Broadway play as a concert,” Meuller said. “The trick is that when you have to cram in a lot of exposition, the music gets short shrift. So what we did with this show is to work in some historical tidbits about each character and how it relates to the next song.”

It truly was a historical night. Mueller describes how it came about, and how rock and roll was virtually created that night, with elements of gospel, country, rockabilly and blues.

“Carl Perkins was least known of the performers, but also the one responsible for getting the others there,” Mueller said.

Legend has it that Perkins, who had released the hit “Blue Suede Shoes,” was recording other songs at Sun Records. A 20-year-old Jerry Lee Lewis was booked to play piano on the session. After recording “Matchbox,” destined to be another hit, Johnny Cash dropped in, then later Elvis Presley showed up with his girlfriend.

The sound engineer was savvy enough to keep the tape rolling as the four legends went through dozens of gospel, blues and country songs until they drifted away.

The stage show will roughly follow the timeline of that night, bringing out the performers one at a time, interspersed with historical facts, before wrapping in a group sing-along and “free-for-all jamming.”

After many performances of “One Night in Memphis,” Mueller has noticed it is drawing audiences of fans of all ages. The original rock and roll teenagers still come out to hear their memories, but a younger generation is appreciating their rocking roots.

“Experiencing this music live is just the best thing in the world,” Mueller said. “You can’t think of it as ‘oldies’ music. Once you see it live — with its incredible beat, rhythms and fun at the show — it never fails to get people out of their seats.”

➤ What: “One Night in Memphis”